Charlie Blackmon concluded a deal with the Colorado Rockies on Wednesday that guarantees him $108 million, or basically the same amount of money slugger J.D. Martinez got from the Boston Red Sox, in spite of a couple of stout industry trends.

First, that teams are more reluctant than ever to invest in long-term contracts for aging players; Blackmon turns 32 in July.

Second, rival evaluators have viewed Rockies hitters warily in the free-agent market because they suspect outsized offensive production is rooted in their hitting at mile-high altitude rather than their skills -- just ask Carlos Gonzalez, who had to settle for a one-year deal to go back to Colorado. Blackmon had home/road OPS splits last season of 1.239/.784, so it's possible Blackmon would have struggled to get a fifth or sixth year in an offer next winter. 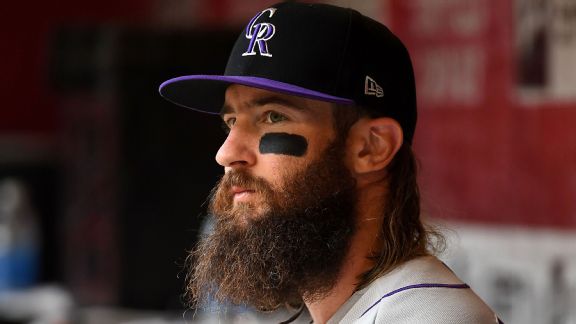 Blackmon had a ton of emotional leverage tilted his way. The Rockies made the playoffs last year for the first time in a decade, and the franchise has built some momentum. But it might be more difficult for Colorado to sustain success than any other team because of its home park and its impact on pitching, and it's very possible the Rockies' best player, Nolan Arenado, will be the premier free agent in the fall of 2019. Friends of Arenado say he burns to win and that will drive the decision of which team will be his next employer.

For the sake of stability -- in the face of the Arenado uncertainty -- it made sense for the Rockies to go above and beyond to keep Blackmon. Now they can operate knowing they'll have a lineup anchor and a well-known player to market. The fans' love for and interest in a player is at the root of emotional leverage.

Other players who will have a lot of emotional leverage the next two years:

• Clayton Kershaw: The future Hall of Famer can opt out of his contract after this season. If he does, he would become the kind of free agent Dodgers exec Andrew Friedman has seemingly worked to avoid -- someone older than 30 years old, with his best years probably behind him.

But Kershaw is the heir apparent to Sandy Koufax, someone beloved by Dodgers fans; he's a legacy guy. Kershaw is not someone who needs or wants a lot of stuff in his life -- the vacation homes throughout the country, a fleet of cars -- but he does seem to take his role as a union standard-bearer seriously. It would make some sense for him to use that emotional leverage to get more guaranteed money than the $70 million the Dodgers owe him for 2019 and 2020 under his current contract.

Will anyone catch the Astros? Can the Dodgers return to the World Series? A new MLB season is here. Preview »

• Paul Goldschmidt: One evaluator said he would not be surprised if the Diamondbacks' first baseman signs an extension sometime in the next six months, given the circumstances. The slugger has been the Diamondbacks' best and most popular player and could be eligible for free agency in the fall of 2019.

He is in a situation similar to that of Blackmon: Goldschmidt will be 31 this year and plays a position the industry has not compensated especially well in the past couple of winters.

But Goldschmidt is The Man in Arizona, and his emotional leverage might never be higher than it is right now.

• Alex Bregman and George Springer: Jose Altuve signed a long-term deal, and the challenge for the Astros moving forward is to retain their other core position players -- Bregman, Springer and Carlos Correa. There is a perception among other teams that Correa, who would likely be at the top of his free-agent class given his age, position and power, is the least likely of the three to sign. That could give more emotional leverage for Springer, who won't be eligible for free agency until he's 30, and Bregman, who could be in line for a massive deal before he becomes eligible for arbitration in a couple of years in the winter of 2019-20.

• Madison Bumgarner: Surrounded by a group of older position players, Bumgarner is 28 and playing for $12 million this year with a $12 million team option for 2019. Over the next five years, the Giants might see some of the players from the championship years move on. Bumgarner could be the last link to those teams, and the player most recognizable and beloved to fans who fill AT&T Park. The Giants have thrived over the past two decades, and if they go through some lean rebuilding years, they might need Bumgarner as much or more for his legacy as for his production. In two years, Bumgarner might have more emotional leverage than anyone.

The Yankees' CC Sabathia came out of Friday's game with hip soreness and landed on the disabled list. The Angels lost Matt Shoemaker to a forearm problem. The Red Sox started the season with a couple of starters on the disabled list. Holes have opened up in the rotations of contending teams already. But there are a couple of things worth remembering about the need for starting pitching.

First, some club executives expect that this summer's starting pitching trade market will be one of the worst in recent memory, with few options available. If the Rangers eventually punt on their season, they'd probably like to move Cole Hamels, He's expensive, though, with a $23.5 million salary and a $6 million buyout on his contract, and he might not have a lot of trade value.

The Rays' stance on Chris Archer is well-known within the league: Yes, they would discuss a possible deal involving the right-hander, but they would want a major prospect haul in return, given Archer's talent and team-friendly contract. Archer is making $6.4 million this year and $7.67 million next year, with team options of $9 million and $11 million for the next two seasons.

Some teams might work to pry Michael Fulmer away from the rebuilding Tigers, and a surprise collapse of a contending team could make a few pitchers available, but, generally, execs say they don’t anticipate finding much help.

Second, with the increased emphasis on relief pitching, few teams are as reliant on starting pitching, anyway. The model for how a team would handle its pitching would be for the starter to work into the late innings before turning the ball over to a closer, or maybe a setup man and a closer. But last year's World Series provided evidence of just how outdated that philosophy is. The number of pitchers used per game:

The 2022 fantasy baseball season is underway! Get the gang back together, or start a brand new tradition.
Join or start a league for free >>

A decade ago, contenders that lost a valued starting pitcher would have worked to identify another starter to assume a similar load. Now teams assume day to day that they'll just do what they can to piece together nine innings, and the starter is expected to work really only a handful of innings.

"It seems like you only need starters for the postseason," said one executive, "and even then, it's only for three or four innings."

The starting pitcher as the ace who carries the team -- such as Bumgarner in 2014 -- is an endangered species, and the summer's trade market will reflect that.

• Within the span of one week, Shohei Ohtani won his first start in the big leagues and clubbed about a quarter-mile’s worth of home runs, and the media concern over Ohtani's spring training results evaporated. The truth is that the Angels staffers were never worried about Ohtani, because Ohtani never seemed to fret. They say his demeanor never wavered, he never seemed anxious and, all along, it seemed to be business as usual -- a player getting ready for the start of a season.

• Hitters strike out more than ever in this era, generally ... but this doesn't apply to Boston's Mookie Betts. In the first seven games of this season, the Red Sox right fielder saw 120 pitches and swung-and-missed just twice.

• The Mets' Matt Harvey pitches against the Nationals on Sunday Night Baseball after a strong spring training, and Bryce Harper's at-bats against him could be a barometer of Harvey's progress. Harvey dominated Harper in the first years of their duels -- Harper started his career 0-for-21 against Harvey -- but in the past two seasons, Harper has swung at 18 pitches thrown by Harvey and hasn't missed any of them.

• The Braves' Freddie Freeman continues to be baseball's most underrated player. In the first week of the season, he had 12 walks, five extra-base hits, 10 runs and just three strikeouts. It could be that Freeman will rack up a lot of walks this season, as opposing pitchers choose to pitch around the dangerous slugger in the way pitchers once work around Barry Bonds.

• The Mets' Mickey Callaway is managing for the first time in his life and learning some of the mechanics of the job. He and pitching coach Dave Eiland, longtime friends, each told this story through laughter: In the Mets' first series of the season, reliever Anthony Swarzak strained an oblique while pitching against the Cardinals. Callaway, a longtime pitching coach with the Indians, went to the mound to check on the right-hander with Eiland and an athletic trainer. It was determined that Swarzak would not be able to continue, and so Callaway told home-plate umpire Brian O'Nora and Eiland they would summon Jeurys Familia, who had already been throwing in the bullpen.

So the umpire knew. The pitching coach knew. But Familia, in the bullpen, did not know.

Eiland looked at Callaway and reminded him that now would be the appropriate time to signal for the reliever -- something that Callaway had not done in his work as a pitching coach. That's the job of the manager, of course.

Then, as Familia made his way to the mound, Eiland and the athletic trainer started to return to the dugout ... and Callaway, as well. They were at the apron of the mound when Eiland mentioned that Callaway would need to stay to hand the ball to the incoming reliever. As Callaway told the story, he then made some gesture to the dugout as if to signal for Wilmer Flores as part of a double-switch, to cover for his move toward the bench.

• Anthony Rendon is famously understated and prefers to talk about just about anything other than himself. On Saturday, he was ejected without saying a word. Plate umpire Marty Foster kicked him out after Rendon dropped his bat disgustedly following a called strike three.

Friday: Karl Ravech on whether the first week represents a case of small sample size for the Diamondbacks, the Red Sox starters and Gabe Kapler or a sign of things to come; Jessica Mendoza on Harper's free agency; Marly Rivera on a sad picture from the Astros' dugout, the Houston juggernaut and Adrian Beltre's record.

Thursday: Keith Law on whether Blackmon or the Rockies got the better deal; Sarah Langs plays the Numbers Game; former big leaguer and current Giants mental-skills coach Bob Tewksbury on his new book and the psychology of baseball.

Wednesday: Boog Sciambi on Ohtani's excellent first days in the big leagues and Kershaw's adjustments; Paul Hembekides on a distinct trend in MLB; and Bob Nightengale on the current quandary for the union.

Monday: The Dodgers' Rich Hill on learning about pitching and his curveball; Tim Kurkjian with first impressions from the first weekend; and Todd Radom's weekly quiz and uniform presentation.