WASHINGTON -- Juan Soto finished a round of batting practice here Saturday and when he stepped out of the cage, he deliberately pantomimed the finish to his swing, the sort of thing you see from veterans but rarely from teenagers. Soto is a 19-year-old with unusual maturity, someone who already has an understanding of the strike zone and how his own mind works best -- that for him, obsessive video study can clutter the brain.

Soto looks like he’s going to be around a long time with the Nationals. Max Scherzer is right in the middle of what might turn out to be the best long-term contract for a pitcher, because he appears to be the reigning Best Pitcher On The Planet with no end to his reign in sight; he threw his bullpen session Saturday in full game uniform, in keeping with Scherzer’s belief that you should practice the way you play. 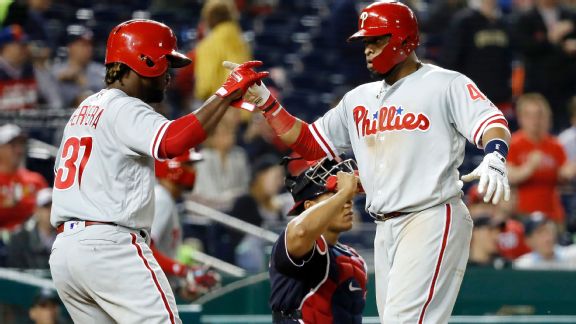 • Phillies not about to go away »
• Nats' offense coming up short »

The national narrative on the Nationals has been that 2018 is the last year of their window of championship opportunity, particularly with Bryce Harper headed into free agency in the fall and the Braves and the Phillies on the ascent in the NL East. But with Soto, Scherzer and the others tied to Washington beyond this season, it seems inevitable that the Nationals will continue to contend regardless of whether Harper stays.

Harper’s tortured performance seems to have eased just a bit in recent days, with the quality of his plate appearances improving and the promise of a second-half surge hovering. It’s unclear whether he’ll bounce back, and how his first-half slump will impact his free agency and the chances of his return to the Nationals.

Harper is hitting .212 with 19 homers and a .353 on-base percentage, and executives with other teams offered some early speculation this week that a down year for Harper could increase the chances he returns to the Nationals -- because they understand Harper more than other teams, and understand that in those periods when he eases the paralytic pressure he places on himself, he is a dynamic force. Since Harper began his career, there has been an expectation that he would approach a record-setting contract in free agency.

But some executives wonder if Harper’s 2018 struggles continue, a better option could be to take a shorter-team deal with an opt-out, to give Harper a mulligan and another launch year; after all, Harper is only 25 years old. “That could work for him, and for the Nationals,” one evaluator said.

As Orioles lefty Zach Britton lingered in the trade market last summer, the Dodgers and the Astros were among the teams that felt as if they wasted a lot of time talking with the Orioles -- because in their view, Baltimore struggles with the process. The Orioles have a different perspective on this, predictably, with some club officials believing that in the end, they assessed the question of whether the offers on the table were worthwhile and decided to keep Britton. But because of how those conversations played out, some rival executives say they won’t actively engage the Orioles -- rather, they’ll wait for the Orioles to come to them with hard proposals.

Evaluators with other teams say Baltimore isn’t really pushing any Manny Machado trade talk yet. It may be that in order for the Orioles to get solid return on Machado, a major injury to a contender is needed, because there are so many left-side infielders available and so few teams seemingly looking for a third baseman or a shortstop. Unless some team steps up aggressively to take Machado off the board, in the way that the Nationals moved aggressively on Kelvin Herrera, the Orioles could go into the last days before the trade deadline without significant offers on Machado. They could be left with the same choice that the Rangers had with Yu Darvish last summer: Take 60 cents on the dollar in value, or keep the player and get nothing more than a compensation draft pick.

“I’m not convinced [the Orioles] will actually trade him,” one rival exec said, “because I don’t know how attractive the offers will be.”

The Phillies have been rumored to be interested in Machado for the stretch drive, but it could be more likely that they’ll pursue him in free agency and try to fill need this summer with someone like Mike Moustakas.

• Nick Pivetta starts for the Phillies on Sunday Night Baseball, and he’s among the fastest-working pitchers in baseball, averaging about 22 seconds between deliveries. Pivetta explained that when he attended New Mexico Junior College, his head coach encouraged his pitchers to work fast, and if they didn’t, pitching coach Matthew Torrez would yell loudly, “THIS GAME IS BORING.” And the pitchers got the message.

Pivetta’s curveball is one of the best in the majors in its effectiveness -- the value of his curve runs parallel to those of Justin Verlander and Aaron Nola -- and he is throwing more and more of them. Pivetta used a conventional grip for his curveball, but when he went to a spike curve, the spin rate on the pitch improved markedly. … Pivetta grew up in Canada but was never interested in hockey, with its early-morning practices, and instead was always drawn to baseball.

• The Nationals made the first big strike of the summer trade market by adding Royals closer Kelvin Herrera. Washington acquired big bullpen pieces in the past, but this has caused clubhouse tension repeatedly for the Nationals -- like when they added Jonathan Papelbon to replace Drew Storen as the closer. Given the generous personalities involved this year -- Sean Doolittle, Ryan Madson, Herrera -- there will not be a scrap over roles. ... Herrera believes that his excellent command this season was built on the additional workouts he did during the winter. A long, ascending road leads to Herrera’s home in the Dominican Republic, and twice a week last winter, he would do a series of sprints up that road.

• The Phillies’ Odubel Herrera has been among the hottest hitters in baseball, clubbing a home run in five consecutive games during the past week. He probably leads the league in social interaction during his at-bats, often pausing to chat with the plate umpire between pitches -- and each of Herrera’s plate appearances is like a separate chapter in each game, because he averages an MLB-high 29.5 seconds between pitches.

• The American League is all but fully declared in the separation of buyers and sellers, with an enormous gap between the best and worst teams. Because of that, some executives of NL and AL contenders expect that there will be a high volume of veterans available, especially in dollar dumps. “A lot of the deals that go down will be about saving two months’ worth of salary,” one evaluator said.

• Some NL officials believe that the Diamondbacks will be among the most aggressive teams before the trade deadline, because their window of opportunity could begin to close after this season. A.J. Pollock and Patrick Corbin will be free agents this winter, Paul Goldschmidt is eligible to hit the market after the 2019 season, and Mike Hazen’s front office is early in the process of rebuilding the farm system. “This might be their best chance for a while to win the [NL West],” one evaluator said.

• Union chief Tony Clark was roundly criticized by agents before and after the last collective bargaining negotiations because they felt he did not seek their feedback in suggestions and strategy -- and instead, shut them out, before agreeing to a deal in which the union seemed to cede major ground to the owners. In recent months, with player unhappiness percolating, the union leadership has given signals that it wants to hear more from the agents.

• Mike Trout has compiled more than 1,000 games in his career, and countless kudos for the way he plays. Torii Hunter, Trout’s mentor and former teammate, refers to him as The Digger, because of the divots he leaves as he’s sprinting to first base. Because Trout is so big, at about 240 pounds, and so fast and runs with such intensity every time, Hunter says that The Digger leaves the deepest divots of any player in baseball.

A special Call To The Legends with Hall of Famer Pedro Martinez, who explains his philosophy about pitching inside and why he wasn’t afraid to retaliate, and his lingering questions about why he was left off voter ballots.

Thursday: Phillies play-by-play man Scott Franzke on the team’s ascent, and the question of whether they’ll target Manny Machado in free agency; Sarah Langs plays The Numbers Game, with some great Trout notes on the eve of his career game No. 1,000; and Boog Sciambi on hyphenated pitching batteries, Giancarlo’s big moment and Trout.

Wednesday: Nationals GM Mike Rizzo on the Kelvin Herrera trade, Juan Soto’s plate discipline and the struggles of Bryce Harper; Jerry Crasnick on the dust-up between the Giants and Marlins, and the future of Mike Trout; and Paul Hembekides on why the Astros might be a lot better than anybody realizes.

Tuesday: Keith Law on the Kelvin Herrera trade; Seattle Times beat writer Ryan Divish about the surprising first half of the Mariners; Sarah Langs and The Numbers Game.