Editor's note: This is part of a weeklong look at the Pro Football Hall of Fame Class of 2018, focusing on plays, moments or defining characteristics of the inductees.

Even as he prepares to enter the Pro Football Hall of Fame, former wide receiver Terrell Owens has managed to create controversy.

HOF Class of 2018: The inside stories 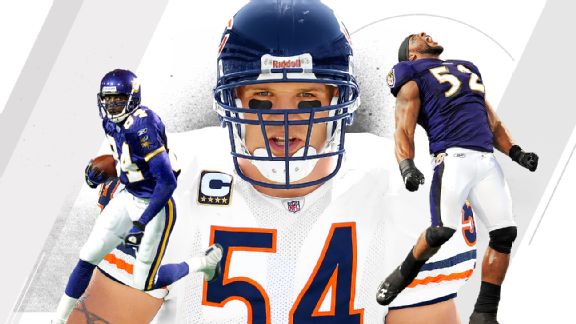 Upset that the doors to Canton, Ohio, didn't open for him immediately, Owens plans to take the unique step of not attending the Hall of Fame ceremonies. Instead, Owens announced he will be celebrating with family, friends, former teammates and fans at the University of Tennessee-Chattanooga, his alma mater, on induction day. It's a fitting move for a player who made a career of generating unforgettable (and sometimes absurd) moments.

Here's a look at five of the more memorable moments from Owens' career:

Celebrating on the star

What happened: Owens' reputation for outlandish celebrations made him one of the league's most polarizing players, but none drew the immediate (and physical) response that his midfield celebrations against the Dallas Cowboys did. After hauling in a 3-yard touchdown pass for the San Francisco 49ers in the second quarter, Owens raced to midfield, put the ball down and raised his arms in celebration while standing on the Cowboys' star logo. Dallas running back Emmitt Smith mimicked the celebration when he scored on a 1-yard touchdown run a little more than a minute later. But Owens wasn't done. After catching a 1-yard touchdown late in the fourth quarter, he again sprinted to the star for another round. This time, Dallas safety George Teague chased him down and delivered a physical hit to Owens, setting off a scrum between the teams with about four minutes left in a game the 49ers would win 41-24.

What happened: In a game that would otherwise go down as one of the most forgettable of his career, Owens made a game-winning, 25-yard touchdown catch with three seconds to go, pushing the Niners past the Green Bay Packers in an NFC wild-card game. Owens, who had struggled with dropped passes and a fumble that led to Green Bay's first touchdown earlier in the game, atoned for those miscues by grabbing the pass from Steve Young between a pair of Packers defenders and hanging on for the catch as he was hit from multiple angles. Owens would later call it the catch that ignited his career.

What happened: Hampered by a fractured leg and ankle injury that put him out just seven weeks earlier, Owens played through his remaining pain and was instrumental in keeping the Eagles in the Super Bowl against the New England Patriots. Owens finished with nine catches for 122 yards despite not being at full speed. Owens earned plaudits for his toughness even though the Eagles eventually came up short in a 24-21 loss.

Quotable: "What that man did was incredible. To come back the way he did from a broken ankle and play at the level he played. Well, what can you say? Some may [have] thought Owens was selfish, but he didn't want to miss the stage of the Super Bowl for himself and his teammates. Sure, he wasn't the same Owens. He didn't have great explosiveness in his run. There were times that he appeared to be limping," cornerback Asante Samuel said after the game.

What happened: After an argument with then-Eagles coach Andy Reid, Reid suspended his surly star receiver for a week. As media congregated around Owens' home in hopes of a comment, Owens held an impromptu news conference. With his shirt off, Owens commenced his workout regimen with situps as he fielded questions. As it turned out, the driveway presser was a harbinger of things to come, as the Eagles eventually deactivated him that November. Owens, of course, would respond to that announcement with yet another driveway news conference, though that time, he attempted to mend fences with the Eagles by apologizing for his actions. The apology didn't work, as Owens did not play another game for the Eagles before they released him on March 14, 2006.

Quotable: "No comment," Owens repeated over and over during the infamous driveway news conference, to the point that he eventually acknowledged he might set a record for use of the phrase before reverting back to it.

What happened: It was future Hall of Famer Jerry Rice's final home game as a 49er but it was Owens who stole the show in this mid-December matchup against the Chicago Bears. While the Niners honored Rice, Owens set an NFL and franchise record for receptions in a game, hauling in 20 catches for 283 yards and a touchdown in San Francisco's 17-0 victory. Rice, who owned the previous franchise record of 16, finished with seven catches for 76 yards and would go on to play one more game with the 49ers before departing for the Oakland Raiders in 2001. Brandon Marshall surpassed Owens' record in 2009 when he caught 21 passes against the Indianapolis Colts as a member of the Denver Broncos. As it turned out, this was one of the rare occasions where Owens let his play do the talking and he attempted to defer to Rice after the game, though Rice was apparently none too pleased with how the day turned out as former Niners coach Steve Mariucci would attest in December, 2017.

Quotable: "It hasn't hit me yet," Owens told reporters after the game. "The most important thing is to give all the credit to Jerry. This is Jerry's day. It's not about Terrell

"[Rice] was pissed," Mariucci told the Rich Eisen Show in December, 2017. "We had this big celebration planned. We had a stage, like there was going to be a concert at (midfield) after the game so he could thank the fans and say 'I love you and it's been great' like Joe DiMaggio. There was a big production after the game planned. So I figured 'OK, this is his last one, he's going to be gone, he's been great, I'm gonna pull him out like the basketball teams do and get a standing ovation,' that's only appropriate in my mind. Well, I did that in the fourth quarter and he came off and we're shutting out the Bears and he bends over and he gave me a mouthful, man. 'I thought this was supposed to be my day, Mooch. What the heck and bleep, bleep, bleep.'" Rice ultimately made the speech after the game.