The opportunity is there every Saturday. Some players seize it. Others let it slide away. Here's a look at the players who shined or slipped in Week 1:

Ohio State WR/RS Ted Ginn Jr.
QB Troy Smith is the better Heisman Trophy candidate from the Buckeyes' offense, but Ginn's performance in the opener was more impressive in my opinion. There was lots of talk out of Columbus this offseason regarding Ginn's improved work ethic and dedication to improving his route-running skills. With two touchdown catches in the game's first nine minutes, it didn't take long for Ginn to back up the hype. While Northern Illinois' defense pales in comparison to some of the upper-echelon units in the Big Ten, Ginn's crispness and savvy as a receiver were still apparent. The junior receiver and return specialist also seems to be in better shape than ever. 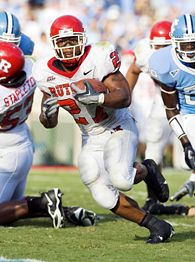 Rutgers RB Ray Rice
Despite rushing for a team-high 1,120 yards as a freshman last season, Rice was overshadowed by versatile fullback Brian Leonard. Rice still shares the backfield with Leonard, and he should share more of the spotlight following his leading-role in Rutgers' road upset of North Carolina. At 5-foot-9, 195 pounds, Rice displayed tremendous toughness in his 31-carry, 201-yard and three-touchdown performance in the season-opener. If he keeps up the pace, Rice could also steal some attention away from Big East headline running backs Steve Slaton (West Virginia) and Michael Bush (Louisville).