SOUTH BEND, Ind. -- After failing to land one of the
nation's leading college coaching candidates, Notre Dame signed one
of the NFL's top assistants. 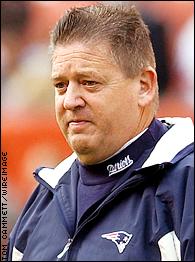 He signed with the Irish 12 days after Tyrone Willingham was
fired and eight days after Notre Dame officials returned
empty-handed after flying to Utah to meet with Utes coach Urban
Meyer. Meyer signed with Florida instead.

Weis agreed to a six-year deal that will pay him $2 million a year, ESPN's Chris Mortensen reports. His hiring ended an embarrassing two-week search by the Fighting Irish to find a coach for perhaps the most storied program in the nation.

The 48-year-old Weis arrived at the school Sunday night, just
hours after the Patriots beat Cincinnati in Foxboro, Mass. Within
an hour, he met with the players.

"Here's what we have to do. I believe there is a proper
protocol, and right now, the most important thing is that I go talk
to the players," Weis said. "So, tomorrow is our time for the
press conference ... Let's do it tomorrow."

The players seemed excited about their new coach.

"It's nice to have a little bit of closure and know we have a
coach and know what kind of system we're going to have next year,"
offensive guard Bob Morton said. "It's a good night for Notre
Dame."

Weis told the players he'll be around as much as possible, but
would be staying with the Patriots through the playoffs.

"He told us to have fun, finish things off right with our
exams, have fun at the bowl game, enjoy break and come back ready
to go," offensive tackle Mark LeVoir said.

In Foxboro after the Super Bowl champions' 35-28 win,
quarterback Tom Brady told CBS, "Even though he's leaving I think
everyone's going to enjoy these last few games and hopefully we
send him out the right way."

Weis, who graduated in 1978, will attempt to restore Notre Dame
to the powerhouse program it was when he attended the university as
an undergraduate while Ara Parseghian and Dan Devine coached the
Fighting Irish.

The door for him to return to Notre Dame opened when Willingham
was fired on Nov. 30 after posting a 21-15 record over three
seasons.

Willingham, who coached at Stanford before going to South Bend,
returned to the Pac-10 by accepting the job at Washington on Sunday
night. Willingham will match up against his former team when Notre
Dame visits Seattle next Sept. 24.

Weis has been the Patriots' offensive coordinator for the last
five seasons, which included two Super Bowl championships.

His stock has risen with New England's success, but the
Patriots' long playoff runs have hindered his attempt at a
promotion. An NFL rule prohibits assistants from being hired while
their teams are in the playoffs.

The New York Giants and Buffalo Bills interviewed Weis in
January, but they hired other coaches before the Patriots won the
Super Bowl. Weis could have faced the same problem this year, since
an NFL team might have had to wait until after the Feb. 6 Super
Bowl to hire him.

Weis nearly died in the summer of 2002 from complications of
gastric bypass surgery, commonly known as stomach stapling. The
coach said one of the reasons he underwent the procedure was to
make himself more marketable to teams looking for a head coach.

He was forced to get around on a motorized chair but has since
returned to full duty.

He taught and coached high school in New Jersey from 1979-84
before taking an assistant's job at South Carolina for four
seasons. He returned to coaching at the high school level for one
year before joining the Giants pro personnel department in 1989.

Weis was hired by the Giants as defensive assistant and
assistant special teams coach in 1990, earning his first Super Bowl
ring. When Ray Handley took over the Giants in 1991, he made Weis
running backs coach.

Information from The Associated Press was included in this report.