Brady Quinn remembers the first time he laid eyes on Charlie Weis. It was in Notre Dame's initial team meeting under the new coach, two winters ago. Weis had already noticed a defeated mentality leaking through the players like a virus, and he informed the Irish that half-hearted practice and finger-pointing would no longer stand. Weis raised his voice, and Quinn could feel the tension in the room. But he did not feel as much anxiety as curiosity. He did not feel as much fear as familiarity. It was as if he had seen Charlie Weis long before. 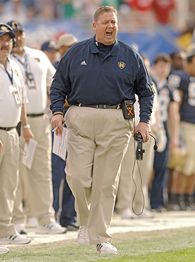 Scott Slates was, above all, a tough guy. Put it this way: He played catcher without a chest protector or a cup. And when any of his three children got scraped up, his version of Hallmark sympathy was, "It'll feel better when it stops hurting." Slates worked for the Ohio parks system, but he loved sports more than anything outside family and faith. He watched football like a warden watches a criminal in solitary, and he raised a son who played offensive line at Kentucky, and another son who played offensive line at Brown. Slates also had a daughter who was every bit as tough as her brothers. Robin Slates would marry a man named Ty Quinn, and together they would raise their only son to be the best passer in Notre Dame football history. Brady Quinn grew up knowing his gridiron-obsessed grandfather as "Pap."