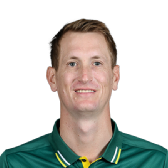 8.45pm: That's it from myself and Miller tonight... Thanks for your comments, folks. George's report is in, and we'll see you again for the decider on Sunday.

8.35pm: No time to digest, let's get on with the presentations... England captain Eoin Morgan: "Disappointing, given the position we were in but SA bowled well at the end. [Roy dismissal?] I think it's a 50-50 call, you can see both sides. I think it's a difficult one. [Buttler in above Morgan] Tactical change, right-hander over a left-hander, didn't work out. [Livingstone] A lot of people are tucked away on debut but we want to see how guys perform, and react in the middle. Tom [Curran] was outstanding, skill level was outstanding, he's put on a yard, makes his variations harder. He bowled exceptionally. We want to see these guys play, but we also want to win at the same time."

South Africa captain AB de Villiers: [You've been out obstructing the field] Benoni, I'll never forget, but to be fair I was a little bit guilty. We were in the right to ask the question and it was up to the umpire, never nice to get out like that. I asked the boys to take it one ball at a time. We had better intent, better energy, good plans. [Huddle before innings?] We discussed the wicket, what we felt was a difficult length, change-ups, the bouncer. Then it was about the energy and showing the South African never-say-die attitude. We love the game back home and to see us come out on top means a lot - and now we have a decider on Sunday. [Morgan catch] I saw the church not the ball, so it was quite interesting. [Phehlukwayo final over] I told them to expect big moments, I'm going to throw them in and they delivered."

Chris Morris is named Man of the Match for his 2 for 18: "Very happy with today's performance, we showed fight, been in tough times recently. It's an honour to play for SA, so very happy. We thought so, we had to bowl well, but saw how England tied us down at the end, thought we had a chance. In T20 it's quite easy to lay down and get beaten, so you have to show fight. I enjoyed the wicket, not just me, our bowlers bowled well at the death - Dane Paterson in his third game. All-round a great performance. [Cardiff on Sunday] It's going to be exciting, someone has to lose, try not to be us."

8.30pm: Well, that blew up out of nowhere... England were 125 for 1, needing 50 off 39 balls when Bairstow fell for 47; Roy was then given out obstructing the field (rightly enough) in Chris Morris' next over and it all began to unravel. In all, England lost 5 for 46 from the last 6.3 overs as South Africa - all of the bowlers playing their part but inspired by Morris - fought back tremendously to level the series at 1-1 with a decider to play on Sunday.

19.6
0
Phehlukwayo to Dawson, no run, Dawson swings and misses... SA have done it! Huge celebrations from Phehlukwayo, who is engulfed by his team-mates after closing out a fantastic match, South Africe winning by three runs off the final ball!

Four needed, three for a Super Over...