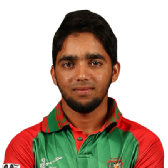 A 180-run stand between Mominul Haque and Liton Das stalled Sri Lanka's advance, and helped Bangladesh secure a draw in the Chittagong Test. In the course of that stand, Mominul became the first Bangladesh batsman to hit two centuries in the same Test and took his match aggregate to 281 runs. Liton got to within sight of a maiden ton, but was dismissed for 94.

Theirs, in fact, were the only two wickets to fall on day five. After they had fallen, Mahmudullah and Mosaddek Hossain soaked up almost 18 further overs, before Sri Lanka captain Dinesh Chandimal agreed to settle for the draw, with 17 overs remaining in the day. Bangladesh were 107 runs ahead at that stage, with five wickets in hand.

The tedious nature of this Test is likely to prompt scrutiny of the Chittagong surface, on which 1533 runs were scored for the loss of only 24 wickets. On day five, occasional deliveries turned dramatically, but on the whole, batsmen could trust deliveries that pitched on the straight - away from the rough. Even wristspinner Lakshan Sandakan, who spun the ball harder than any other spinner in this match, was not gaining appreciably more turn on day five, than he had been on days one and two. It is the lack of wear on this surface that has largely led to such dull cricket.

However, Sri Lanka cannot say they made the most of their chances on day five. Batting on 71 just after lunch, Mominul sent an under edge to the wicketkeeper off a Rangana Herath delivery, but Niroshan Dickwella could not hold on. When Liton was on 62, the fielder at short midwicket grassed a tough chance. Another difficult opportunity came to Sandakan late in the second session, when Mahmudullah pulled aerially to cow corner, but the ball burst through his fingers, and Bangladesh's stand-in captain was reprieved on 6.

But those opportunities had come after lunch. In the morning session, Mominul and Liton had played the match situation more or less perfectly, neither counterattacking nor stonewalling, just batting securely and proficiently throughout.

Mominul had some nervy moments early in the day, but he hit a handsome six off Herath in the fifth over of the morning, and was more or less at ease after that - the only exception being when he ducked into a Lahiru Kumara short ball midway through the session and required brief medical attention.

His innings, being a rearguard of sorts, was not so boundary-laden as his effort on day one, but he rotated the strike efficiently nonetheless. His half-century came off 78 deliveries, and his hundred off 154. Where in the first innings there had been an animated celebration, the expressionless raising of the bat in the second dig was more typical of Mominul. Not only was this his second hundred of the match, it was also the second occasion in which he had scored a match-saving century against Sri Lanka in Chittagong, having hit an unbeaten hundred at this venue in 2014.

Liton largely batted in the same vein, favouring the sweep to the spinners and the drive against the quicks, though he was not quite as adept at rotating the strike as Mominul. He brought up a half century - his third in Tests - with a crunching cover drive off Sandakan, and could have had a maiden ton, had he been a little more patient. Batting on 94, he ventured an almighty wallop off Herath, but had not got to the pitch of the delivery. Dilruwan Perera tracked the high chance back from mid off and completed a difficult catch.

Save for one unsuccessful caught-behind review by Sri Lanka, the remainder of the Test was uneventful. Mosaddek closed the shutters, making 8 off 53 balls. Mahmudullah -following some wild strokes in the company of Liton - was measured after the fifth wicket fell. He was unbeaten on 28 off 65 balls when the draw was confirmed.