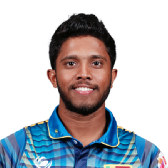 Dasun Shanaka and Thisara Perera ransacked Bangladesh's bowlers, after a fifty from opener Kusal Mendis, to help Sri Lanka chase down 194 - their highest in T20Is. This after fluent fifties from the returning Soumya Sarkar and Mushfiqur Rahim, who was passed fit after a niggle, led the hosts to their highest total in T20Is.

Kusal Mendis, who had replaced the injured Kusal Perera, struck his maiden T20I fifty to give the chase direction. Sri Lanka then suffered a wobble when they lost Danushka Gunathilaka, Kusal Mendis and Upul Tharanga in quick succession, but Shanaka and Thisara added an unbroken 65-run stand for the fifth wicket to take their team home.

Mendis and Gunathilaka kickstarted the chase with four boundaries off seamer Mohammad Saifuddin in the second over, which cost 19 runs. While Mendis was particularly strong through midwicket, Gunathilaka regularly pierced the off-side gaps with cuts and drives. The pair added 53 for the opening stand before left-arm spinner Nazmul Islam - one of Bangladesh's four debutants - had Gunathilaka stumped for a 15-ball 30.

Mendis, however, continued his aggression: he welcomed Mustafizur Rahman into the attack with a hat-trick of boundaries through the covers. He went on to bring up a 25-ball fifty when he slugged Afif Hossain - also on debut - over midwicket for a six. The offspinner hit back when he had Mendis holing out to long-off two balls later.

Tharanga didn't last for too long thereafter, falling to a catch at the mid-wicket boundary in the ninth over but Shanaka restored Sri Lanka's rhythm with back-to-back sixes off Mahmudullah in the next over.

Saifuddin then leaked three boundaries in the 11th over but Rubel Hossain gave Bangladesh hope when he had Dickwella top-edging a catch to fine leg. Thisara and Shanaka then, however, combined to tear up the Bangladesh attack. Thisara was particularly severe on Rubel, hitting 18 runs off six balls, including two sixes. He finished with 39 not out off 18 balls while Shanaka hit an unbeaten 42 off 24.

Bangladesh's bowling starkly contrasted with their batting. Sarkar marked his return to the team with a maiden T20I fifty. He could have been dismissed for 12 had Gunathilaka hung onto a return catch in the second over. Sarkar then took three fours off Isuru Udana in the next over before Gunathilaka bowled debutant Zakir Hasan for 10.

Just as Sarkar looked to reach a higher gear, he was given out lbw off Jeevan Mendis' first ball. Replays indicated that the ball had pitched outside leg stump and was also heading past leg stump. Sarkar, who had fell over trying to pull the delivery, didn't go for a review and walked off.

Afif Hossain, also on debut, fell two balls later, with wicketkeeper Niroshan Dickwella showing great awareness to track down the googly, which had hit the back of the bat.

Mushfiqur and Mahmudullah then got into the groove and relaunched Bangladesh's innings in the last 10 overs. Mahmudullah smashed Jeevan Mendis over long-on before he hit Sri Lanka's debutant Shehan Madushanka over the extra-cover boundary. He eventually fell for 43 off 31 balls, having struck two fours too. Mushfiqur, who posted his highest T20I score, then applied the finishing touches, but in all, it wasn't enough for Bangladesh.