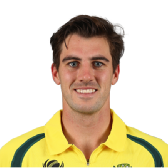 10.55pm Zampa has a career-best 4 for 43 and Australia have wrapped up a series win - their sixth in a row against Pakistan. Australia were setting today, and their 266 for 6 was built around Finch's 90, with Maxwell's breezy 71 providing the coda. With the pitch juiced up by the persistent drizzle, Cummins burst through the top order and Zampa mopped up the tail.

"It wasn't the easiest wicket to start on," says Glenn Maxwell. "Once I got through that, it got easier. To win six in a row, to win with this team, has been amazing. We're peaking at the right time. We've been really focused about what we want to do here. We want to build on this momentum. [The ball] is coming out alright. It's been a continual build for our team since last year, and we're starting to get it right."

Pat Cummins is the Player of the Match

"It was a little bit greasy out there underfoot, and it took me a few over to get used to it," says Cummins. "Me and [Behrendorff] had a good partnership, and they nicked a few. It felt alright, thanks to management and Finchy they gave me a couple of games off, and it was nice to come back today fresh. Fresh legs helps [in the field too]."

"The total was in our hands, but when you're playing in Abu Dhabi it's always tough, anything over 250," says Shoaib Malik. "Keeping wickets and going deep in the game, that's where you create the chance, but we couldn't do that. The Aussie bowlers were seaming and swinging the ball around. If you give couple of chances to a good batsman, then expect to chase something big. Getting opportunities and grabbing them is the key of the game. We are trying to give all the players chances so selection committee and team management have a better picture in front of them. Every game is important. We have two more opportunities. If we win two games, we have something in our pocket."

"We've played some consistent cricket," says Aaron Finch. "We've been building up and doing the basics well. Any time you can beat India and Pakistan in their home conditions is good. We're playing spin a lot better than we have in the past. Handscomb played a good innings before he was knocked over by a good ball. Partnerships don't allow the opposition to get on top. That's been an improvement. Maxwell and Handscomb both played great knocks. As a captain, it's very hard to set fields to guys like that."

Finch on missing out on his hundred: "I got a bit impatient. I got a bit greedy. I was struggling out there to be honest. I don't know how many times I hit the guy at cover. If we had lost tonight, it would have been my fault for batting so slow. But we ended up getting a good score on a difficult wicket. The rain put a bit of moisture in the wicket, and Cummins and Behrendorff exploited that. Our spinners were incredibly good again."

And that's all from your commentary team, Andrew McGlashan and Liam Brickhill. Australia will go to the fourth ODI in Dubai on Friday with the series in the bag. Pakistan have two more chances to get it right. Until next time, goodbye!

Mohammad Ehtesh: "We can see Imad Wasim's genuine all rounding capabilities as well as his mindset for finishing each innings. When Babar Azam, Fakhar Zaman and potentially Asif Ali in for the WC, Imad should be in a decent position to finish off games on a high! "

44.4
W
Zampa to Mohammad Hasnain, OUT, there's a review. Zampa floats a googly up high and it rushes in to beat Hasnain's inside edge and hit him on the back leg. The appeal is turned down, but they ask for a review. Three reds, and he's gone!

Hamza: "You could say Imad was attempting a run there given how far down the wicket he was, thus making the it legal :)" -- In any case, won't have any effect on the result

44.3
W
Zampa to Junaid Khan, OUT, Zampa has his third! Tossed up high and Junaid takes the bait, slogging wildly to send a swirling top edge into the air. Carey calls for it, and holds it with a reverse cup with his helmet grille slipping back over his head

44.2
2
Zampa to Junaid Khan, 2 runs, slapped down to wide long on
44.1
1
Zampa to Yasir Shah, 1 run, legbreak, spinning away from an off stump line to be punched to cover

Zampa will complete his quota