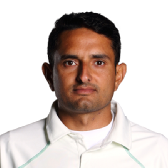 Abu Dhabi really was nothing like Dubai. Over in the nation's most global city, Australia batted out 140 overs in blazing sunshine to thwart Pakistan's hopes of a win. Here in the capital under clouds and a slight drizzle, it took Mohammad Abbas and his teammates barely 50 overs to scythe through an Australian side that looked as feeble as the worst pessimist had feared a fortnight ago.

Abbas completed a five-wicket haul, his second in this match and his fourth in a career that yet spans a mere 10 matches. It was his scintillating spell on Friday morning that ripped through Australia's middle order, condemning them to a 373-run defeat, their fourth-worst in history.

Abbas was strewn across every record book in Abu Dhabi. He is the first fast bowler to take a ten-wicket haul in UAE, he's the joint fastest to 50 wickets, and has the lowest average of any bowler with that tally in the last 122 years. For a bowler who only made his debut 18 months ago, he is fast rising to the status of unofficial world No. 1, a ranking none other than Dale Steyn tipped him to reach. If you watched him bowling in this Test, and indeed these two weeks, you'd be hard pressed to disagree.

These are especially worrying times for Justin Langer, the new Australia coach. In the three Tests since the ball-tampering scandal in Cape Town, Australia have suffered two defeats that rank as their second and fourth-heaviest of all time.

On Friday, the middle order collapsed yet again in an intense morning session where Abbas ripped through them with virtually unplayable accuracy. Marnus Labuschagne and Mitchell Starc showed fight when it looked like the game might not extend to the second session, but that partnership was broken half an hour before lunch as Yasir Shah finally got his teeth into the game.

Travis Head and Aaron Finch began the day solidly enough, but the sheer insurmountability of the task that lay ahead brought its own constricting pressures. Asad Shafiq, captaining in place of Sarfraz Ahmed - the regular captain is being examined for possible concussion - kept Abbas on for an extended spell this morning, and for good reason. Mohammad Rizwan was keeping up to the wicket, and Abbas, with his deadly accurate off-stump line, began to wear the Australian pair down.

Head was the first to go, nicking through to the keeper, and that started a masterclass in stump-to-stump bowling. Abbas struck Mitchell Marsh's bent back knee in his next over, and a review revealed it would have hit the stumps. His next over produced two further wickets, Finch the first victim, before perhaps the best one of the lot. Three balls into his innings, Tim Paine felt he could safely leave one from Abbas that began outside the stumps. The ball seamed in, and the Australia captain could only watch as it clattered into off stump. Australia had lost four wickets for seven runs, and Abbas was suddenly on the cusp of another five-fer.

Usman Khawaja wasn't able to come out to bat because he'd been off the field for a large time nursing an internal injury, so Starc came out instead. It was the best passage of play for Australia. Abbas was finally given a rest and the pair, particularly Labuschagne, looked reasonably comfortable against Yasir. They batted together for over an hour and brought up the 50 partnership, and for Australia to take any sort of momentum into the next session, it was obvious the two would need to see this one out.

Yasir ensured that wouldn't happen. As Starc stepped back to deal with what he saw as a short delivery, it turned sharply and struck him on the pad. That was followed by perhaps the worst DRS review all series; it wouldn't have been more obviously out had it smashed into his middle peg. Yasir would find another wicket next over, with Peter Siddle trapped in front. Replays showed a review - which Australia did not call for this time - would have saved him, with the ball pitching slightly outside leg stump.

The only uncertainty following the lunch interval was whether Abbas would be able to complete his ten-wicket haul. Though come to think of it, there never was going to be any doubt.