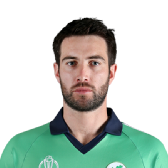 8:33pm And that is all from our live coverage. Stick around for the report in a bit. Good night!

Andy Balbirnie: There was pressure. Just for a morale booster, to get that win against these guys, it's great for the team. I was in control. There was a couple of scary moments, but you have to take risks The last few days we've been watching videos of their main threats. You go and bat and dream of having that kind of a knock. We're a very close team at the moment, so just to be able to win that will be great for us.

Andy Balbirnie is the Man of the Match.

William Porterfield: Obviously didn't start great. I can't speak high enough about his knock. Not just getting a hundred but getting us over the line. Doing everything he speaks about doing. It's been a very tightly contested series. In Sharjah we beat them 2-1, in Ireland they beat us 2-1. We would love to take the lead.

Asghar Afghan: Our top order batsmen played some poor shots. That's why we were 74 for 5. I think 256 was good on this pitch. We dropped some catches and Balrbirinie played very well. We lost mainly because of our fielding.

Ahmad Sohrab Sa: "In cricket matches a single mistake can change the result, in today match Afghanistan did a very big mistake by given 10 overs bowling to Samiullah Shenwari. In 1st match Gulbadin bowled 7.2 for 20 runs today Sami bowled 10 overs for 60 runs."

Isaac Marshall: "Maybe Afghanistan should pay their respects to Balbirnie by inviting him to next year's Afghanistan Premier League?"

Abhijato: "We take a bow, Mr Balbirnie! You have played like a sensation tonight, and proven that the Irish cricket team is far from done. The fightback this team has produced despite being against the wall and not in the favour of the critics throughout this tour so far would have crumbled lesser teams, but they've turned up more impressively every time they come out on the field. Here's to hoping this inspires the reignition of the Ireland Cricket Team!"

8:17pm Anyone who saw the early stages of this innings would not have believed either Balbirnie or Ireland themselves would make it to 8:17pm in the night, leave along as winners by four wickets. Balbirnie has got 55.7% of the runs, in the face of a collapse, in the face of a quality spin attack, and despite his own shakiness at the start. Just kept on batting, taking it long, building the pressure on Afghanistan with every over. And Afghanistan have buckled under the pressure. An indiivudal knock of 145, and a partnership of 143 that involved an invaluable knock from Dockrell has helped Ireland draw level.

Saoirse : "That six off Rashid Khan has surely sealed the match, though my Irish pessimism still has me worried!"

48.3
1
Dawlat Zadran to McBrine, 1 run, short of a length and in at off stump, runs the defence into his foot. They steal a single pitch side
48.2
1
Dawlat Zadran to Balbirnie, 1 run, dropped! Oh no no no no. That is poor from Afghanistan. Clearly feeling the pressure. Rahmat at short fine. Slower short all at the shoulder. Waits for it and lobs it straight to the fielder with the attempted hook. That was as simple as they'll come in the 49th over of a tight game

Does Dawlat have some magic left tonight?

48.1
1
Dawlat Zadran to McBrine, 1 run, full and in at middle stump, steps across and flicks to deep square

Dawlat around the wicket