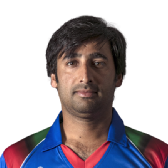 That's all from Saurabh, Thilak and me. Thanks for joining and we look forward to your company for the Test match on the 15th.

Andy Balbirnie is the man of the series All the batters are aware how good their spinners are. I just kind of knew my game, we watched a lot of their footage.

Asghar Afghan It was a good series, we are targeting the world cup, so we made changes in every match. Top order's a concern, the Test match should offer an opportunity.

8.00pm After being walloped in the T20Is and trailing twice during the ODIs, Ireland have done superbly to draw level, with a comprehensive five-wicket win here. Andy Balbirnie was a major contributor again, anchoring the chase to perfection with 91-ball 68 to follow up on his match winning hundred earlier. But Paul Stirling was the star, his charge curtailed by a contentious lbw decision that he was visibly furious about. His 88-ball 70 brought Ireland within sniffing distance of the target and the middle-order did enough to take them home without much drama. The pitch certainly got better to bat on under lights, but Ireland still had a strong spin attack to contend with and they did so beautifully. Afghanistan would be disappointed but they've been in an experimental mode through the series, making three or four changes on an average to test their bench, leading into the World Cup.

47.2
4
Mohammad Nabi to Poynter, FOUR, full toss down the legside, tickled away down to fine-leg and that's the match
47.1
W
Mohammad Nabi to Dockrell, OUT, length outside off, too close to the body to flay his hands through that one, drags it back onto the stumps