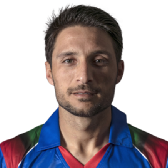 Rahmat ShahAfghanistan
Only Test, Ireland tour of India at Dehra Dun, Mar 15-18 2019
Afghanistan won by 7 wkts
Player of the Match

Afghanistan collect the trophy for this one-off series. The team joins him to celebrate and it won't be done at the ground either. It's a massive day in their cricket history and things are only going to get better from here. Thank you for your company. See you later.

"Happy. It's a historic day for Afghanistan, for our team and our people," Afghanistan captain Asghar Afghan. "We have been playing for a while, we have been playing first-class cricket, so we have that composure. The bowlers were very good, Rashid, Yamin. Now we're going to South Africa for World Cup preparation. We will try out best to play good cricket."

Rahmat Shah is the Man of the Match for his twin fifties: "First of all I'd like to congratulate the country for this win. [Difference between his form in ODIs and this Test]There was a difference in the pitches - the ODI wickets was suitable for spin, this was better for batting. We played session by session and tried to win the match that way. I would like to give credit to the bowlers, they played really well."

12.15 pm "It was obvioulsy going to be a tough ask defending 150. It was the first innings where it went wrong for us," Ireland captain William Porterfield says. "At the time, winning the toss was big, Any multi-day game, we had to capitalise in the first innings. If we'd done how we'd done in the second innings then, it could have been a completely different game. But credit to Afghanistan, they outplayed us. We had a few glimpses. It's only our second game, quite a few lads making their debuts. But you want the lads to kick on and make a big contribution. And once Afghanistan got past us in the first innings, it was always going to be hard. Long tour, we came in from Oman, but playing a Test match, you're never tired."

By matches, Afghanistan are joint second-fastest to a maiden Test-match win, alongside Pakistan and England

Anwar Sahak: "Tears all over my face"

MoonVale: "As an Irish person, I am of course sad that Ireland lost, but congrats to Afghanistan and their rise through the ranks of cricket, good luck going on to the WC and hopefully Ireland can upset the old enemy!"

Anubhab Mukherj: "Being a die hard Afg fan from Kolkata, how I wish i could have been there in the stadium to watch them bath in glory. Lots of love to them."

12.05 pm Both results were possible at the start of the day, but now, bathed in the gloe of the noon-day sun, it seems silly that anyone ever thought Afghanistan would slip today. Rahmat Shah and Ihsanullah batted with great poise, ushering the way to this moment where the entire team is huddled together, shoulder to shoulder, screaming and singing and jumping around with joy

Rupam: "I have been a fan of the Afghanistan cricket team for quite some time now. Really enjoy their game. Congrats for their maiden test win and all the best fron CWC19.. hope they will put up a great show there.. Afg winning a match is bo longer an upset, they have come a long way with some real good display.. from an Indian fan.."

Niamatullah Sal: "Congratulations! What a performance by our brave Afghan team ; yesterday I was so afraid of 4th innings test matches pitches drama. But thanks God that we achieved the target."

47.5
4
Cameron-Dow to Hashmatullah Shahidi, FOUR, a rasping pull shot over square leg, racing away to the boundary and Shahidi will go down in history as the man who struck the runs that brought Afghanistan's first Test match victory. Punches the air in triumph, goes over to hug his partner, Ihsanullah, and they both soak in the moment.

Abhijato: "I've been a huge fan of these teams - both showed tremendous heart in a fascinating contest here. Congratulations to Afghanistan for their maiden victory, and as for Ireland - The script does not change. Even the Afghans cruise towards their target with ease like Pakistan. Maybe their luck will change when they play a non-subcontinental team ;)? Anderson will be waiting for them in his favourite hunting ground, but the Irish will look to utilise their experience in County. Best of luck Irishmen!"

47.4
W
Cameron-Dow to Mohammad Nabi, 1 run, OUT, he's run-out! Oooh, this is silly. And he knows it is, walking back, hitting the air with his bat. Having played a deft little sweep shot, he gets greedy and wants two. Fine leg runs back and to his left quickly enough to stop that and the throw at the strikers' end is pin-point too.

Sifat Khawry : "I going back to the flash backs of incredible journey of Afghanistan Cricket... Following those matches with associates on radio, Hasti Gul Abid's winning score in Jersey, our first T20 Match with India in 2010 World T20, qualifying to the World Cup 2015, Getting full membership status in 2017 and now this historical moment.. Oh God!! Dont know how to express my emotions!!!"

47.3
W
Cameron-Dow to Rahmat Shah, OUT, oooh, he's got the worst luck! Missed his century in the first innings by two runs. Falls with Afghanistan three away from a historic win. Poor Rahmat. He did all the hard work and now with the target one hit away, he goes for that one hit, running down the track and being deceived by the change in length from Cameron-Dow. Swings wildly anyway, all across the line, is beaten by the turn and stumped fairly easily

47.1
4
Cameron-Dow to Rahmat Shah, FOUR, supremely hit. Rahmat again showing class, slinking deep in his crease to deal with a short and wide delivery and slapping it through extra cover. Doesn't overhit, but always seems to put the bad ball away

Tom: "this has been a superb performance from the Afghans showed that they learnt alot from the India game hopefully they can get some more test cricket and some outside of Asia soon so we can see how they go on a seaming deck as for Ireland they can take plenty of lessons and experience to take with them to the Lords test "

Fowzul Aleem Fa: "There will be many more surprises in 2019 World Cup with the emergence of Afghanistan Team"

46.6
0
Balbirnie to Ihsanullah, no run, nudges a flatter delivery on off stump to square leg