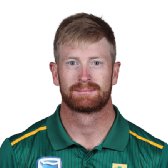 8.41pm: Stick with us for some post-match analysis and reaction from Firdose Moonda at the ground. shortly. Interested to hear Finch's rationale for leaving Agar out, given how effective South Africa's spinners were - combined figures of 3 for 93 in Shamsi and Maharaj's 20 overs, as Sarat points out. Firdose's report will magically appear here within the next few moments, but aside from that, it's farewell from Ranjith, Alan and myself, and we'll be back on Wednesday for the 2nd ODI at Bloemfontein as Australia look to draw level. Cheerio!

Mustafa Moudi: "Australia's middle order is paper thin without Maxwell and Handscomb. Yes Maxwell is injured right now but he wasn't picked for India tour either sighting his form... They need to stop this blind experimentation and go back to the proven duo!" Lots of weeping and gnashing of teeth about Maxwell on this theme throughout the day, so to clarify: he was picked for both the T20I and ODI legs of this tour, but was ruled out with an elbow injury.

Lungisa: "Did anyone notice that Australia didn't hit a single six in this innings?"

Saoirse: "Surely Klaasen for MOTM but let's not forget the fine bowling from Ngidi" Yep, expect it will be. Looked a good innings at halfway, and even better with hindsight.

8.35pm So a convincing 74-run win in the end for South Africa. Australia lost their last seven wickets for just 43 runs, failing comprehensively to build on Smith and Labuschagne's partnership. The asking rate continued to climb after the powerplay, as that pair tried to take the game deep, but both of them got out at an awkward time, leaving a tricky scenario for new batsmen on a pitch that suited pace-off options. That left Ngidi, Phehlukwayo and Shamsi to wrap things up in the back half and they duly did.

45.1
W
Nortje to Hazlewood, OUT, bursts through him, 87mph/140kph, too quick for Hazlewood backing away and it pegs back the off stump! South Africa wrap up an impressive victory, going 1-0 up in a series for the fourth time this home summer... will this be the one that they turn into a series win?

Zampa won a game for South Australia earlier this season in improbable circumstances, but as I remember they weren't quite as improbable as this

44.2
1
Phehlukwayo to Zampa, 1 run, backs away, Phehlukwayo follows him, and Zampa pushes down to long-on for a single

Josh Hazlewood is the No. 11. Not much batting pedigree.