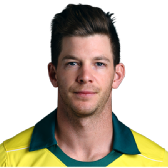 It was eagerly anticipated and the opening day in Adelaide delivered. When the Test has played out to a conclusion, it may be that a 20-minute period either side of the new ball being taken under lights becomes key. During this phase, Virat Kohli was run out having produced a masterful 74 and then the man involved in the mix-up, Ajinkya Rahane, who will take over the captaincy, departed to Mitchell Starc.

Kohli, who may have been given out on 16 had Australia opted to review a glove off Nathan Lyon, and Rahane added 88 to take India to 188 for 3 at the brink of the second new ball, following a stand of 68 between Kohli and Cheteshwar Pujara, Australia's nemesis of the 2018-19 series, which repelled the attack until the ball become softer.

Then, under the night sky, it became 206 for 6 through a mixture of India's own mistakes, as Rahane sold out Kohli over a run to mid-off, and the expected threat of Australia's quicks with a pink ball under lights. Starc and Josh Hazlewood made the incisions before Wriddhiman Saha, who was preferred over Rishabh Pant, and R Ashwin did well to remain intact, carrying India's hopes of 300-plus with them.

Australia's frontline quicks were helped to be fresh for the second new ball by the nine overs sent down by debutant Cameron Green whose bowling restrictions were eased as he sent down a five-over spell in the afternoon - the first time he had bowled more than four in a burst this season. While he had a few issues with no-balls, there was plenty to be encouraged by with good pace, a challenging line and conceding under two runs an over.

Both captains wanted to bat first and it was Kohli who had the choice, but Australia could not have wished for a better start when Starc, pre-empted by Ricky Ponting on commentary, found the sizeable gap between bat and pad into the stumps via an inside edge. One of India's big pre-Test debates was Prithvi Shaw vs Shubman Gill and the second innings of this match may dictate how much that dominates the build-up to the second Test.

The opening session (and most of the day) became the best of nip-and-tuck Test cricket as India managed just two boundaries in the first 25 overs. There were nervy moments along the way: Pujara edged just short of Tim Paine before he had scored, Mayank Agarwal might have been taken at short leg had Travis Head stayed lower, another Pujara edge didn't reach third slip and he also clipped wide of leg gully.

Australia's pressure was rewarded when Pat Cummins produced a beauty that nipped back between bat and pad to remove Agarwal. After the first break, Cummins then hustled Kohli with the short delivery, India's captain fending in front of short leg and then awkwardly playing a ball behind square. Cummins and Kohli. The best v the best. When Cummins was rested he had figures of 11-6-12-1.

The contest with Lyon was no less compelling as Pujara, especially, was initially keen to try and attack the offspinner. It was in the 36th over when Hot Spot picked up the small flick of Kohli's glove down the leg side through to Paine. Lyon barely appealed, Paine was interested but it was hardly a full-throated shout from the Australians.

It was Lyon who did break through when Pujara, having started to rekindle memories of two years ago for the Australia bowlers, got a thick edge into his pad that looped to leg slip. It wasn't given on-field but Pujara was almost walking and it was the simplest of reviews and decisions for the TV umpire.

By the second break, India were still scoring at less than two an over but with the final session came the promise of things quickening and so it transpired. Firstly, that was Kohli and Rahane taking a little more advantage of an older ball even as the lights started to take over from day time. Kohli, who also took a painful blow on the glove from Starc, went to his fifty from 123 deliveries, the second slowest of his career, but there were a few crisp boundaries not least a pull off Starc through midwicket.

Australia had managed to keep a hold of the run-rate throughout so the game never got away from them even during the two lengthy stands, but the gift they were handed when Rahane initially called his captain for a run before saying no could not have come at a better time.

Rahane was then trapped plumb by Starc's fourth delivery with the new ball - a bad period for him compounded by the wasted review - and India were no doubt left with a feeling of what might have been. However, there should be a few more twists and turns to come yet before we know if it really was decisive.