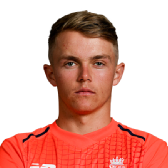 Sam CurranEngland
Sanjay Manjrekar: Sam Curran's intent and belief something to marvel at

10.53pm That was one heck of a finish. Fitting end to an absorbing white-ball series. Hope you enjoyed our coverage as much as we did bringing it to you. We have a smorgasbord of post-match content lined up for you. Make sure you send in your #PoliteEnquiries for Miller and Varun. Don't forget the hashtag. Until next time, this is Deivarayan Muthu signing off for Andrew Miller, Saurabh Somani, Venkat Raghav and Chandan Duorah. Stay safe and cheers.

Virat Kohli, India captain: As I mentioned, when top-two teams battle, you get exciting games. England will not throw in the towel at any stage, Sam played well, but we kept taking wickets to put enough pressure on them. The mindset shifted in the last couple of overs. Hardik and Nattu were brilliant to finish it off. [It's] most disappointing for the guy to drop the catch. Everyone wants to do the best for the team on the field, but catches do get put down. But as individuals there's no lack of intent and we eventually ended up crossing the line. I mean I'm surprised that Thakur wasn't the Man of the Match. Four wickets and scoring 30 runs and Bhuvi was a big contender for Man of the Series. These guys were the difference in middle overs and powerplay. Prasidh and Krunal were impressive, but the most pleasing thing is the depth of our batting. Very exciting times ahead for us. It has been an amazing season for us and we wanted to finish on a high. This tour has been sweet, winning every series. Enjoy the IPL and back again with this group of guys. It is [a bit of a respite] for the support staff. Scheduling is something that needs to be looked at in these times...am sure things will be discussed and things will change in the future.

Jonny Bairstow, Man of the Series: Yeah, pretty pleased, but would have liked to be on the winning side of it at the end of the day. But, today, it wasn't meant to be. To come back from Tests and do this will give me a lot of confidence. To be honest, going outside off is a better way to counteract that [inswing]. Now, I'll be facing him at the [SRH] nets, don't have to worry about that. It was special from him [Curran] to take the game deep and his hitting was special. Obviously, credit to Nattu for nailing his yorkers. Obviously, everyone knows what Nattu does at the death. Fair play to him.

Sam Curran, Man of the Match: We didn't win the game, but happy with the way I played. I haven't done something like that for a while especially for England. Disappointed with the finish. I had a few messages from the dug-out as well: try to bat deep and try to take most of the strike. Fair play to Natarajan - he had six deliveries there and showed why he's a good bowler. I knew that one side is shorter and Bhuvi is an outstanding bowler. As I said, a massive learning curve for me, but disappointed at the end. Again, it's a learning series with the ball and feel like it has given me a lot of confidence for the IPL and next IPL. Going straight there [CSK] for the IPL.

Jos Buttler, England (stand-in) captain: Yeah, fantastic game. Both times made mistakes and played some brilliant cricket. Unbelievable innings from Sam Curran...congratulations to India. We're disappointed, we came here and we wanted to win, but there have been great learnings throughout the process. The white-ball leg has been fantastic and close and today was no different. I think playing cricket in India is always a learning (experience) - the guys who made their debuts in this series. Guys will go away as better cricketers. It was a fantastic wicket and we didn't bowl as well at the top but we dragged it back fantastically in the end. We pegged Hardik and Pant back to that total. A few guys [are] missing out, but the talent pool in white-ball cricket is growing and we'll continue to strive to do that. It was an amazing effort from Curran to take a lot of ownership and take most of the strike. I know Sam will be disappointed but he showed a lot of character and we are all proud of him.

It's also that time of the day or rather night. Do send in your #PoliteEnquiries for Miller and Varun. Don't forget the hashtag

Bhuvneshwar: It was tense, being a bowler you are always under pressure. There was dew and some tension in the ground. I wasn't worried about early boundaries. Inswing was the plan for me and that worked. Definitely, looking forward to the IPL. I'm just happy I went through this entire series.

Dhawan: I was always in the groove. Just that I wasn't playing (laughs). Once I got the chance I made the most of it. I was playing domestic cricket - Syed Mushtaq Ali and Vijay Hazare - and that was match practice for me. I'm glad I played those tournaments. The wicket was very good, especially the last two matches and I enjoy playing on such bouncy tracks.

10.17pm Wow! What a finish to this series, to this tour! India complete a clean sweep, but that's not the full story. Sam Curran's ODI best - by a distance - takes Englans so close to their first ODI series win in India since 1984. And my fingers are toast...

The unsung hero of that India win was Bhuvneshwar Kumar, whose figures stand out a mile in the wickets and runs column. Two big early breakthroughs put his side in command, and Thakur's cutters were vital in building on that advantage. But it was the rookie Natarajan who had to hold his nerve at the death. His yorkers are quite the thing. Right, I need a lie-down, here's Deiva to take us through the post-match.

Akhilesha: "England have such unbelievably good all rounders who put in their best performances in such crucial times!" --- Sam Curran, like Stokes, makes things happen...doesn't he? He just fell short today, Sam's 95* is the joint-highest score by a No.8 batsman in ODI cricket.. Woakes features a couple of times in this list

Ben Bradshaw: "A big shout out to Sam Curran, he brought England so close! A fitting end to the Indian tour for England.."

Rahul Kumar: "How can topley be on strike when it was 1 run and a run out?" Sent back

49.5
4
Natarajan to Curran, FOUR, clattered hard, but not hard enough! Whistles through the covers, but not quite with the necessary elevation!

Vaibhav: "This is the preview of WC final we didn't get in 2019. Equally exciting to one we had though"... yeah, that was decent entertainment in the circumstances!

Curran is back on strike. Can he nail two big hits from four attempts?

Redemption from Pandya for the clangers? What on earth can Topley do, a rabbit to end all rabbits

49.1
W
Natarajan to Curran, 1 run, OUT, decent yorker, decent connection, drilled to long-on, Wood gets his World Cup final skates on in an attempt to run back to the danger end, but it's a brilliant bullet throw from Pandya to the keeper, and he's short!

Rohit has a long chat with the rookie. Mumbai Indians' skipper has the cool head for this hot moment. Curran is dripping with sweat... what's in store? Super Over anyone?