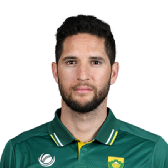 The trophy is presented to South Africa, who accept it with loud cheers - a number of reasons to be happy about indeed. And that marks the end of our coverage. Thanks for sticking around. That's goodbye from me and Himanshu!

David Miller, South Africa captain: "I had a back spasm, just had to nurture it [in the first T20I]." On competition within the team: "It's a good problem to have with World Cup coming. Guys have stood up and contributed and it's healthy to see it coming through. it's really nice to contribute as captain. Have seen different areas of the game as captain, has been a nice challenge. How we've played in the last 18 months, we're going to be a force at the T20 World Cup."

Andy Balbirnie, Ireland captain: "Probably wasn't close. We didn't show up with the bat. it gets very hard when you lose so many wickets. Spinners bowled well, got through the storm but they caught up." On playing back-to-back series: "This is what we've been looking for. We are looking forward to a lot of things, the Afghanistan series next week."

Reeza Hendricks is Player of the Series: "Short of a half-century but happy to have contributed." Tip for youngsters: "Try to keep it as simple as possible, stick to your strengths and not complicate it. We're not thinking too far, end result will take care of itself."

Wayne Parnell is the Player of the Match for his 5 for 30: "It was just about keeping things simple. batters did really well. it was about doing the basics, doing what's required. great atmosphere in the Proteas side, everyone's success is being celebrated and there's a lot of confidence."

9.57pm That's the end of the series, and South Africa have won their fourth T20I in a row. They never really let Ireland into the game, with Parnell finishing as tonight's hero with his career-best T20 figures. It was a clinical performance from South Africa - they were superb on the field today, too. Ireland did frustrate them with the last wicket partnership of 42 runs - the second-highest of the game - but South Africa did find a way in the end. Ireland will be a bit disappointed with this result after coming close in the last game.

18.5
W
Pretorius to McCarthy, OUT, This time it's taken! Full and on leg, it's flicked to the midwicket region and lands in Markram's safe hands. South Africa take the series 2-0