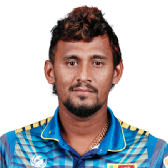 Suranga Lakmal decked the Bangladesh middle order, Thisara Perera swung blows in the middle, Dushmantha Chameera and Lakshan Sandakan wiped out the tail, and a hail of sixes carried Sri Lanka's openers to a paltry target of 83.

All up, Sri Lanka required only 35.5 overs to complete the 10-wicket win - 24 overs to dismiss the opposition, and 11.5 to run down their score. The hosts, meanwhile, were guilty of complacency perhaps, their place in the final long secured, and with little to gain from this game. It is these two teams who will now contest Saturday's final.

Kayes added back to squad

Imrul Kayes has been added to Bangladesh's squad for the tri-series final against Sri Lanka on Saturday. Imrul had been excluded from the team for Bangladesh's third and fourth matches. He struck a first-class century in the BCL in that period.

Having conceded 320 to the same opposition only six days ago, Thursday was a Sri Lanka bowling fantasy. The short ball proved profitable for the quicks again, as it had done against Zimbabwe on Sunday. Lakmal, Chameera and Thisara were sharp and intense, and Sandakan extracted rapid turn from a wearing Mirpur square. So effective were these four bowlers that Sri Lanka's other frontline spinner - Akila Dananjaya - was not required to bowl a single delivery. Lakmal took 3 for 21, and the others two wickets apiece.

It was in the third over that the mayhem began, when Anamul Haque threw his bat at a Lakmal delivery and redirected it to the stumps via his inside edge. This united Bangladesh's best batsmen of the series - Shakib Al Hasan and Tamim Iqbal - but they would soon be parted by a piece of electric fielding by Danushka Gunathilaka. Tamim pushed a ball square on the off side and set off for the run, but swooping to his left from point, Gunathilaka pulled off a velvet-smooth pick-up and threw down the stumps, leaving Shakib several metres short of his ground. Tamim himself would soon be victim to another piece of Gunathilaka athleticism. Unable to control a bouncer from Lakmal, he sent the ball high off the splice, behind square on the off side. Tracking the ball from backward point, Gunathilaka dived to complete the catch.

Mushfiqur Rahim was the only Bangladesh batsman to make an attempt at piecing together the innings, batting securely for a while after his team had slipped to 34 for 4. His efforts, however, were not supported by the men at the other end. Sabbir Rahman soon ran at Thisara and hoisted him to mid-on. Abul Hasan then edged Thisara to the wicketkeeper, to leave Bangladesh at 71 for 6. Suddenly, with only the tail for company, Mushfiqur himself was soon out attempting a scoring shot, when he bunted a slower Chameera ball to short midwicket.

That was Chameera's first wicket in eight matches, and he soon had another - Nasir Hossain caught behind on the leg side. Sandakan, who had been menacing throughout his six overs, closed out the innings, spinning one ball past Mashrafe Mortaza's swing, before Rubel Hossain holed out to long-on.

Gunathilaka - playing this match in place of the injured Kusal Perera - ensured the chase began quickly, as he struck Mashrafe Mortaza for successive leg-side fours at the end of the first over. Upul Tharanga had himself began to open his shoulders when he was dropped at cover by Tamim, but the remainder of the chase was as smooth as it was fast-moving. Gunathilaka struck three sixes - off spinners and quicks - the most impressive of which was the swat off Mustafizur Rahman over deep midwicket. Tharanga's two sixes came down the ground, and all told, the pair hit 46 of their 83 runs in boundaries.