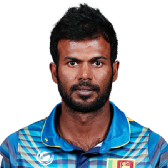 Dushmantha Chameera blasted out the top order, Akila Dananjaya squeezed through the middle overs, and debutant Shehan Madushanka - playing only his seventh senior cricket match - closed out the tournament with a hat-trick. That the Sri Lanka attack had seemed incapable of menace in the first two matches of the series is a distant memory now. Defending 222, the bowlers constricted the Bangladesh chase, dismissed the opposition for 142, and propelled Sri Lanka to their third victory on the trot and the tri-series title.

The Bangladesh batting effort was hamstrung by the absence of Shakib Al Hasan, who landed heavily on his bowling hand while fielding in the 42nd over, and sustained an injury that will keep him out of the first Test. The remainder of their batsmen though, did not have the measure of this slowing Mirpur surface. Mahmudullah alone prospered, scoring a valiant 76 while wickets fell around him. His was the last act of the tournament, chipping Madushanka into the hands of extra-cover with Bangladesh needing 80 runs to win.

The victory also highlights a potential blind spot in international cricket's regulations. Chandika Hathurusingha was Bangladesh's coach only three months ago, and is now with the Sri Lanka side. His knowledge of Bangladesh conditions, and of the opposition, were clearly instrumental to this victory. Perhaps the question ought to be raised whether there must be a cooling-off period before coaches can switch sides.

Hathurusingha's acumen aside, Sri Lanka were animated and energetic during the defence of this score. The fielding was dynamic, with two run-outs - including one from a Thisara Perera direct hit - pulled off. It was Chameera's bowling, though, that set the tone for Bangladesh's innings. With the pitch responding to his natural short length, Chameera had Tamim Iqbal top-edge a pull to midwicket before Sabbir Rahman fell in similar fashion a few overs later. In between the wicket-taking balls, there were few loose deliveries. Chameera bowled six overs in his new-ball spell, and conceded only 13.

Mahmudullah and Mushfiqur Rahim - the two remaining senior batsmen - attempted a recovery from 22 for 3, but the partnership was laboured, and soon the pressure to hit out had built. This was when Dananjaya struck. Having already raised a close lbw shout, he had Mushfiqur top-edge a sweep to short fine leg. Soon after, Mehidy Hasan offered Dananjaya a return catch, when the ball stopped a little on the pitch. With Bangladesh having slipped to 90 for 5 in the 29th over and no batsman but Mahmudullah appearing comfortable on this surface, the hosts were in an increasingly difficult spot.

Mahmudullah battled on for a while, hitting two calculated sixes off Dananjaya and one off Suranga Lakmal, but the required rate was now touching seven, and the pressure was too much. Madushanka, who bowled accurately enough and with sharp pace, was the beneficiary of poor lower-order strokes. Mashrafe Mortaza sent a thigh-high full toss into the palms of midwicket, then Rubel Hossain attempted a huge heave first ball only to be bowled. Mahmudullah's wicket - off the first ball of the next Madushanka over - completed the hat-trick.

That Madushanka was played at all was a Hathurusingha move. The bowler, who is of little repute, was handpicked by Hathurusingha ahead of the tour, and deployed in the final, probably as a surprise.

Bangladesh will rue their scrambled batting, after their bowlers had been intense through the back end of Sri Lanka's innings. Rubel Hossain delivered a spate of searing yorkers as he collected figures of 4 for 46. Mustafizur Rahman used his cutters intelligently through the middle overs and collected 2 for 29. They had been outstanding during Sri Lanka's last 15 overs, in which seven wickets fell for only 64 runs. It was clear at that stage that run-scoring had become tough, but in dismissing Sri Lanka for 221 - the last wicket coming off the final ball of the innings - Bangladesh will have felt they had given their batsmen a good chance.

Sri Lanka's batting was largely laboured, though there was one flash of belligerence near the start of the innings. Perhaps attempting to attack himself into form, Kusal Mendis struck three sixes and a four off successive Mehidy Hasan deliveries, on his way to a nine-ball 28. Sri Lanka's two senior batsmen - Upul Tharanga and Dinesh Chandimal - spent the most time at the crease, scratching away for a combined 173 deliveries to return scores of 56 and 45 respectively. Niroshan Dickwella was the other serious contributor, making 42 off 57 balls, but largely failing to score with the cute behind-the-wicket shots he favours because the ball came so slowly off the pitch.

This trophy is Sri Lanka's first in ODI cricket since November 2016, when they had won a tri-nation series in Zimbabwe. Bangladesh will be bitterly disappointed to miss out on the title, after securing rollicking wins in their first three games.