I walk onto the Central College grounds in Bangalore just in time to hear India have won the toss and will be batting against Sri Lanka. The players are on the field in their team kits, knocking balls around and doing fielding drills. Apart from the lack of giant concrete stands packed with screaming fans, there is nothing to suggest that this is not just another T20 international. Until you notice some of the players are being led onto the field on the arms of their team-mates and support staff.

It is the semi-final of the inaugural Twenty20 World Cup for the Blind. Pakistan have just beaten England in the first semi, and India and Sri Lanka are about to play for the other slot in the final. There are a few hundred people milling about, many of them players from the nine participating countries. Off to one side is a table with trophies, to be handed out the following day.

On the PA, the announcer says it's 14 minutes to game time. I find myself a seat and browse through the rules. There are three categories of players in each team: B1, who are fully blind; B2, those who can see up to three metres; and B3, those who can see up to six. The ball, which jingles, is delivered underarm, and rolls along the pitch (there is an overarm variant in England). The B1s bat with runners, and each run they make counts for two under the rules.

As the action gets underway, the first 15 minutes produce a powerful helicopter shot, a direct hit from long-on, and a leaping attempt at a catch at fine leg. It is hard to pick out the fully blind fielders at first, as most move quite naturally when the bowler runs in. After the ball is hit, though, you can see the difference: while the partially blind run after the ball, the B1 players only throw themselves, fully prone, in the direction of the ball when they hear it approach.

Trying to get my head around what I am witnessing, and wondering how to bring up the players' visual handicaps without coming across as insensitive, I head in the direction of the teams. I spot a salesman trying to sell a group of players sunglasses. A couple of the visually impaired players try a pair on and then pass them to a blind team-mate, who can't get them on. "You're wearing them upside down," his friend informs him, and he, along with the others, bursts out laughing. I am a little relieved; this lot, from the West Indies, don't seem to be bogged down by what can be construed as a limitation.

What makes the partially sighted or blind get into cricket? "I just went for the juice and snacks," Toussaint Gardner, the visually impaired West Indies captain, laughs. He says he thinks he's a better footballer than cricketer. "I was in university when the English brought the [blind] game to Jamaica in 2006. I did not think cricket could be played with a rolling ball, but I tried out and here I am."

Many agree the game opens up new avenues for the players. South Africa's Hendrik Christiaan, who played two 40-over World Cups before this one, says: "The diseases that lead to you being visually impaired narrow your world. Playing this sport encourages us to get out of that little black hole. It is a means to earn respect in the community." One of his team-mates who was part of a street gang was shot in the head about five years ago and so lost his sight. "The bullet is still lodged in there somewhere, but that was a turning point for him," Christiaan says. "He decided to clean up his life and started to play cricket. The game gave him a second chance."

"While I was on my way to a hundred, the commentator was referring to me as 'the Jacques Kallis of the blind team' over the PA - that made me want to stay in all the more" Johan Schroeder, who, during a group game against Sri Lanka, became the first B1 player in history to score a century for South Africa

Sugam Pattarai, Nepal's team manager and secretary of the Cricket Association of the Blind in Nepal, says many of the players in his team have found jobs because of cricket. "For us, the players develop through cricket. The game lifts them, gives them a better quality of life. Like our captain - he's a musician in a restaurant in Kathmandu. We also have a professional masseur. These players have found jobs only because of cricket. The businesses' management is often very excited to see that they play cricket for Nepal and, to help them out, offer them jobs."

As might be expected, finances are an issue for most teams. Several, but not all, countries' blind cricket associations are affiliated to their sighted teams' cricket boards, but that doesn't necessarily mean any financial security; they have to campaign to raise funds. Nepal managed to raise the money needed to fly in for the tournament, but not enough to fly out: they made a 52-hour journey from Bangalore to Gorakhpur on the India-Nepal border, and it then took them another 12 hours by road into Nepal.

Almost all the players across teams hold jobs during the week to support their families, and play cricket on weekends. Many had problems getting leave to come to the World Cup. "We don't have enough time to play," England's Hassan Khan points out. "We have our jobs or education to pursue. At times, cricket is not the priority, and we can spare just one or two weekends a month for it."

An added worry for some of the non-subcontinent countries is the lack of youngsters coming through. South Africa are struggling to fill places left vacant after their older players move on, and it's no different for Australia. "There's no one to replace the old guys like me," laughs 42-year-old Hamish MacKenzie, who lost his sight in an accident at 26. "There are 250 visually impaired cricketers in Australia, we have a national championship once in two years and two or three national camps a year. But it is hard to know where the young cricketers will come from. About 15 to 20 years ago blind cricket was the only thing they could take up; now they have so many weekend-sports options. And there are no blind schools anymore to take cricket to - these kids have all been integrated into the mainstream.

"We are actively trying to get hold of young kids while they are at school, through organisations like Vision Australia. We players try to do our parts too. I also play goalball, the Paralympic sport, and when playing in the local league in Victoria, I try to talk the players into trying cricket. Sometimes they come and knock a few balls around, and by the time the goalball season finishes and the cricket one starts, they know where they stand with cricket. Hopefully we get a few new young faces that way." 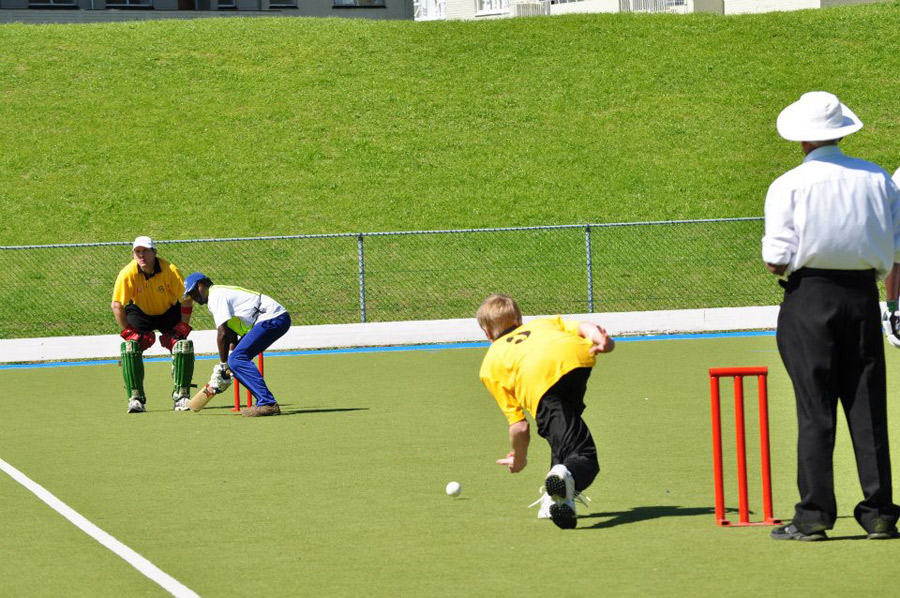 Types of balls: The ball that is used internationally is made of plastic and contains small metal pieces, which make the required sound. In Australia, the ball has two layers: the inner shell contains metal bits and the outer is made up of an open weave. In the UK, a size three football containing ball bearings is used; this ball is bowled overarm.

Team composition: Four B1s, four B2s, three B3s. Two players from the same category cannot open the innings. B1 players have to bowl a minimum of eight overs in T20s.

No. 1 priority: Hearing the ball is crucial and the biggest challenge for the players on the field, almost every player agrees

Next up: The 40 overs World Cup in 2015, which will be in South Africa. Arjuna Ranatunga has also announced plans to launch an Asia Cup.

Vernon Barnaard, whose 19-year-old son Vernon Jr (a B1 player) is the youngest in the South African team, says it's up to parents to nudge their visually impaired children towards activities that can help them grow. "Once I was driving along with my two sons and we saw people jet-skiing on the lake of a dam. We were discussing it, when Vernon asked me, 'What's a dam?' We often have moments like these, which are very revealing. Many of these kids haven't even seen a field. They need to be actively led by their families if they are to get into the game. And if they do get into it, it can only do them good, as it broadens their horizons."

Neil Mackay, Australia's coach, who also works with sighted cricketers, says that a more hands-on approach is often needed. "The biggest challenge is communication. With a B2 or B3 player, you can demonstrate, show them how to keep the elbow up. That's not an option with a B1. Here you have to spend more time with them and literally hold their elbow up in the right position to tell them how it's done."

The challenges, though, sit lightly on the players for the most part. Most of the ones I chat with are quite open and seemingly at ease with their blindness. Australia's MacKenzie tells me how, when the team went go-karting once, his partially sighted team-mates allowed him and the other B1s to have a go at steering, only for him to end up crashing into a large tyre wall and pick up flak about his driving skills. England's Hassan, also a B1 player, tells a story, overcome with mirth: "I was having a swim at the team hotel. I got out of the pool and dried myself off, and my team-mate and I decided to play a prank on the lifeguard on duty. My friend left me to walk by myself, and I, pretending I didn't know where I was going, promptly turned towards the pool and walked off the edge. The lifeguard had a moment's panic and jumped up to rescue me, before we let him in on the joke."

India go on to win the semi-final, and a day later there is good news for blind cricket as a large crowd shows interest in the India-Pakistan final, which the home team wins. The heady few minutes that follow, as the India players take their lap of honour and celebrate with the fans, are a well-timed reminder that cricket is not just about money or power or politics.

The essence of the sport, however, is captured by Rupa Balal and Bhagawati Bhattarai from Nepal, the only two women players in the competition. "I've devoted mind, body and soul to cricket from the start, and it has taught me so much," says Balal. "We may not be as powerful [as the men] when it comes to batting and bowling," Bhattarai says. "But then cricket is not just about power. Technique, strategy, temperament, it all counts. It's a sport that teaches you many life lessons."