Five lawsuits that will change sports 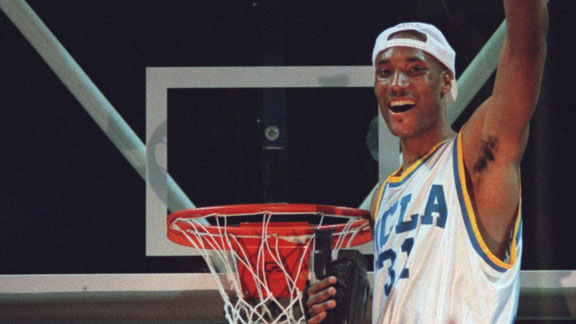 UPDATE: In my Nov. 8 column about five lawsuits that will change sports, I incorrectly reported the amount that the NCAA spent on legal fees last year. As the NCAA points out on its web site, I was off by quite a bit. According to the organization, the actual amount spent on legal fees was $5 million last year and about the same the year before. An analysis performed by the Indianapolis Star showed that the NCAA spent a total of approximately $84 million in fees between between 1995-2009. The File regrets the error.

The NCAA paid out a whopping $5 million in legal fees last year, and while that may seem like chump change to an organization that just inked a TV deal that will pay it $10.8 billion over the next 14 years, it's also a sign of the troubles the organization is having defending its notions of amateurism.

Of course, the NCAA isn't alone in facing legal challenges that could change the sports landscape. From a drug case that is headed to the Supreme Court to an Olympic battle centered on a sex aide called ExtenZe, here are five cases that could become game changers in the very near future.

Why should a sports figure give away his likeness, just because he once played in college? That's the question that former UCLA basketball star Ed O'Bannon is asking in a lawsuit that could reshape the way college sports is marketed.

The NCAA argues that it doesn't license student images, just games. But in February, a federal judge shocked the organization by refusing to have the suit thrown out.

Now, 11 more ex-players have signed on with O'Bannon. Meanwhile, Sam Keller, the former Arizona State quarterback and 2004 Sun Bowl MVP, has opened up a second front on the video game company Electronic Arts, asking for his cut of the proceeds for the use of his image. The same judge who sided with O'Bannon combined their suits with six others to create a monster challenge to the NCAA's marketing hegemony.

"This litigation has gotten to a point that has to be troubling for the NCAA," says Vermont Law School professor Michael McCann. "No previous lawsuit that I know of has advanced to this stage. It elevates the possibility of a verdict where the damages are astronomical. Potentially any retired athlete whose image has been used by the NCAA after they graduate is part of this class."

Considering EA's NCAA football franchise just released its 18th game, there won't be any shortage of names to put on the plaintiff list.

Video games may be the least of the NCAA's problems. Former Rice DB Joseph Agnew starts his federal court attack on its 37-year-old practice of giving one-year scholarships by saying, "This suit arises out of a blatant price-fixing agreement between member institutions of the NCAA."

Agnew's beef is that the NCAA is preventing schools from offering guaranteed full rides to recruits who are at a constant risk for injury -- as he was when he needed multiple surgeries his junior year at Rice. When the Houston private school cut him from the football team in his junior year, he appealed its decision to take away his scholarship. Agnew won, but he also had to shell out $33,000 to pay for his senior year.

Agnew is seeking the right to sue on behalf of all other students in the same boat, saying the costs of a full education are improperly inflated by the one-year rule. And he's got company. The U.S. Justice Department's antitrust division is snooping around the issue.

Is the era of the guaranteed four-year scholarship around the corner?

Two years ago, the promoters of a German tennis tournament marched into a Delaware court to complain that the ATP, the world's tennis body, had no right to shuffle their event to a B-list spot on its schedule. Their argument was that the league, which has offices in Florida, shouldn't be above American antitrust laws.

They didn't do very well. A jury found that the ATP had every right to set its own schedule. What's the alternative? Chaos?

No, the promoters say. Fairness. In September, they filed this appeal to the Supreme Court, insisting that the ATP is illegally dominating the market for players.

What changed to make them think they have a chance now?

In March, the Supreme Court ruled that the NFL could be sued by a clothing company upset about being locked out of its massively insular marketing machine. What the cases have in common, lawyers for the GTF say, is the principle that leagues should be able to be sued for the rules and policies they set.

Gabriel Feldman, director of the sports law program at Tulane University's law school, thinks that it's unlikely the Supreme Court will hear the case. Still, if the high court bites, he'll be interested in seeing whether the ATP -- or for that matter, the PGA, Olympic sports or any of nonunionized leagues -- will be given the same deference as the NFL to set its own rules.

When Minnesota Vikings DT Kevin Williams went to his local drugstore to buy the diuretic StarCaps before the 2008 season, he couldn't have fathomed that the purchase would make him a central figure in a Supreme Court case.

But that's what happened when he failed a drug test for bumetanide, a banned substance that wasn't on the product's label. The NFL took the case all the way to the Supreme Court, asking it to void a Minnesota court ruling that found it violated local law when it took more than three days to notify Williams of his positive drug test. Minnesota also requires that an employer give an employee the right to explain the positive test, whereas the NFL doesn't accept excuses.

The NFL tried arguing that its collectively bargained drug policy would be upended if it had to hew to the laws of each state where it does business. (In fact, only two other states, Maryland and North Carolina, have drug laws that could be considered in conflict.) The NBA, NHL and USADA, along with MLB, filed supporting briefs.

Monday, the Supreme Court refused to hear the NFL's appeal. In a statement, the NFL replied: "The decision does not address in any way the merits of the claims made by the players, which have been rejected by every federal and state court to consider them."

The ruling ensures that Williams and another teammate who also tested positive, DT Pat Williams, get to play out the season. But the NFL is worried about a lot more than those two players. The way league officials look at this, today it's the league's drug testing policy that is coming under fire.

The NFL isn't without options. It can take the narrowest route and go back to the Minnesota court to argue that its policy isn't actually in conflict. (That's probably the most likely scenario.) Failing that, it can also ask the state's legislature to carve out an exemption specifically for athletes.

But neither will achieve its larger goal. That's why the league is also lobbying Congress to pass a law that will give its collective bargaining agreement priority over any state laws that conflict with it. The problem, say critics, is that would literally put the NFL above the law.

A lot of Olympians are eyeing the recent arbitration decision in the case of LaShawn Merritt, the reigning 400m Olympic gold medalist, which left him banned for 21 months for three positive drug tests. The panel gave Merritt leniency because it found that his elevated levels of testosterone came from his purchase of ExtenZe, a sexual performance aid that he bought at a 7-Eleven store.

The arbitrators also ruled that that Merritt should be eligible for the London Olympics when his ban ends, since "enhancing his sports performance was the last thing on Mr. Merritt's mind when he purchased ExtenZe."

Trouble is, their influence ends on our end of the pond.

The International Olympic Committee issued a curt response to the decision, saying Merritt shouldn't bother packing his bags. "The IOC rule states very clearly that any athlete sanctioned for six months or more will be banned from participation in the next edition of the Games," IOC spokesman Mark Adams told The Guardian.

Los Angeles-based defense attorney Howard Jacobs says the rule is ripe for challenge in the courts. "The rule is arbitrary, and there are dozens of Olympic hopefuls who are watching how this case will play itself out in terms of someone challenging the IOC," he says.