Perhaps it's time we threw in the towel and just
changed the name of the MVP Award to the Barry Bonds
Award. In this way, we would be acknowledging that he
is the best player every year without having to debate
the semantics of what the award actually should
represent. It would also give other players around the
league hope that they can actually bring home some
hardware. As it is, Bonds does so much to produce runs
that there really is no competition as to who the best player in the league might be. Call it the Barry Bonds Award and suddenly, Albert Pujols -- a
player having a season that easily distances himself
from the rest of the league -- is a walk for the
honors. 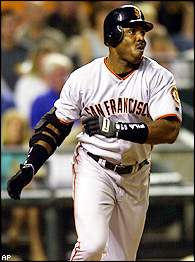 Five Giants managed to homer Tuesday night but,
surprisingly (or perhaps, Ripley's Believe It or
Notingly), none of them was Barry Bonds. Instead,
Bonds was practicing the other part of his game at
which he has no equal: getting on base. He hit two
singles and drew three walks in five trips to the
plate.

It's no mean feat to enter a game with an On Base
Percentage of .534 and actually raise it, but Bonds
has been doing that ever since the All-Star Game. At
that time, he had an OBP of "just" .496. While this a
figure that would have landed him in the top 20 best
seasons of all time, it was a decided downturn from
last year's .582 and 2001's .515. Since that time,
however, Bonds has been getting on base over 60
percent of the time. Tuesday night's on base extravaganza
raised his post-All-Star OBP from .615 to .628.