Now that we're down to 16 teams, you may be wondering which stats are going to be key to predicting the success of the remaining teams. It's more than a little tricky to unlock this mystery with any certainty, so I'm going to take the easy way out and give you one popular stat that will be nearly irrelevant to each team's future. 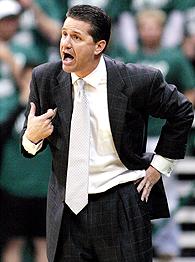 Seemingly since the beginning of televised hoops, a staple of the halftime stats recap is "points off turnovers." I don't know where it came from (maybe it leaked over from football) but I know it's close to meaningless to a team's success.