Most spectacular single-season artistic achievement? That came in 1978, when all four members of Kiss released solo albums on the same day, to universal critical and commercial acclaim. Second most spectacular single-season artistic achievement? Why of course that would be 2006, which saw the publication of Peter Morris's two-volume opus, "A Game of Inches: The Stories Behind the Innovations That Shaped Baseball." With nearly 900 pages, Morris covers "The Game on the Field" in the first volume and "The Game Off the Field" in the second. Morris, also the author of "Baseball Fever: Early Baseball in Michigan" and the forthcoming "Level Playing Fields", is well-known to Scrabble aficionados as the 1991 World Champion. Somehow, between writing books and learning every word in the Scrabble Dictionary and earning a living, Morris found time this week for an e-mail interview.

Rob Neyer: First thing's first, Peter. Researching and writing one book like A Game of Inches would be a notable accomplishment for any baseball historian ... and somehow you published two volumes ... in the same year ... while holding down a job? Unless it's a trade secret, can you tell us mere mortals how you did it? 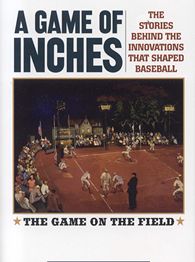 Peter Morris: No, it's not a trade secret! The books started out as one big project and we separated it for convenience, so it looks like they came out very close together. But really there were five years of research that went into both of them.