PHILADELPHIA -- Never mind that Jamie Moyer has the work ethic of a Tour de France contestant, or continues to get hitters out with a fastball that registers slightly faster than Jose Canseco's on the radar gun. The thing that strikes Cole Hamels about Moyer is that he's so darned nice to everybody.

"It blows me away -- how polite he is and how he has time for everybody," Hamels says. "Sometimes when you get in the spotlight, people think they're bigger and better than everybody. You have to be humble, and he's very humble."

The observation seems particularly relevant today, given that Moyer has just spent 20 minutes in the Philadelphia Phillies' dugout giving an interview to two teenage reporters from the Arrowhead, the newspaper from his high school alma mater in Souderton, Pa.

A few minutes later, the Phillies take the field for stretching and batting practice. Hamels, who isn't pitching today, stands behind second base doing "bucket detail," dropping balls relayed from the outfield into a large red bin. After a while, Moyer sidles up for some casual conversation.

When he dispenses advice, it's more big-picture than baseball specific. "Keep your mouth closed and your ears and eyes open," Moyer might say. Or he'll discuss the importance of preparation. "The one day you slack off or fail to work hard, it becomes easier to slack off the next day," Moyer tells Hamels.

When the two left-handers play catch, Moyer makes it a point to hold his glove across his body, because that forces Hamels to stretch his arm and get extra extension on his throws. It's the kind of small, subtle detail that fosters good habits over time.

The Phillies are competing for the National League wild card, and while Ryan Howard is justifiably getting headlines for taking a Louisville Slugger to the home run race, the team's starting pitching has been a catalyst of late. Over the last 12 games, Philadelphia's starters have a combined ERA of 2.81.

The Philly staff also leads the league in intergenerational bonding. Moyer, 43-year-old father of six, and Hamels, 22-year-old phenom, have little in common off the field. But they've formed a relationship on the basis of changeups and competitive spirit. 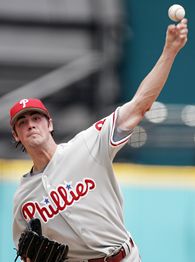 For Hamels, it's like having his own personal Rent-a-Mentor.

"This is the top level," Hamels says, "but there's a level beyond it where you have the Cy Young winners and MVPs. Jamie's mental approach to the game is absolutely phenomenal. If I can learn from him and better my mental approach, it will help me in the long run so I can get to that next level."

Bridging generations
Hamels' potential is evident for all to see. The Phillies selected him with the 17th overall pick in the 2002 draft, and a year later, Baseball America christened him the organization's top prospect. He made his major league debut this season after only 35 starts and 195 innings in the minors.

Although Hamels was shaky Sunday, lasting only four innings and 90 pitches in a 3-0 loss to Florida, that clunker was the exception to the rule. He is averaging 9.4 strikeouts per nine innings, and he's pitched at least six innings in seven of his last nine outings.

After Hamels dazzled the Astros in a 3-2 victory last week, Houston first baseman Lance Berkman raved about the kid's mound presence and repertoire. "He has the best stuff of any lefty I've seen come into the league in a long time," Berkman said.

When it was pointed out that the Astros faced Minnesota's Francisco Liriano in June, Berkman didn't back off much.

"Liriano has tremendous stuff, but Cole has great stuff, too," Berkman said. "He doesn't have quite the slider or the velocity, but his angle creates some problems. He has a great downward angle on all his pitches and with his changeup. That's one reason it's as deceptive as it is."

Hamels gained an appreciation for the change as a youngster watching Trevor Hoffman pitch in San Diego, and it's his defining pitch as a pro. In contrast to fellow prospect Gavin Floyd, who seemed tenuous and unsure of himself with the Phillies earlier this season, Hamels throws his fastball, curveball and changeup with conviction.

"Cole's fastball can get up to 93, but when guys start looking for that changeup, 93 starts looking like 110," Phillies catcher Chris Coste said. "As a hitter, if you have two pitches in your head that you're looking for -- and they're as good as his are -- you're not going to hit either one of them." 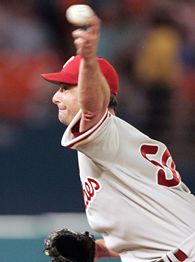 Moyer, of course, is the patron saint of baseball's velocity-impaired. Last year, he went 13-7 for Seattle to join Tommy John and Warren Spahn as the only lefties since 1900 to post double-digit wins at age 42 or older.

When the Phillies acquired Moyer from Seattle for two minor leaguers on Aug. 19, general manager Pat Gillick figured the old southpaw could benefit from new environs and the surprise element. It had been 15 years since Moyer last pitched in the National League with St. Louis, so a whole new generation of hitters was waiting to corkscrew itself into the ground against his changeup.

The local angle made the story more heartwarming. Moyer grew up a short drive from Philadelphia in Souderton, idolized Steve Carlton as a kid and played college ball in the city at St. Joseph's.

In his Phillies debut, Moyer threw six efficient innings in a 6-3 victory over the Cubs. Two days later, he watched Hamels take a pounding in an 11-2 loss to Chicago. Their lockers were side-by-side at Wrigley Field, and Moyer fretted over ways to take the sting out of the beating.

"I'm thinking, 'Oh boy, this is going to be interesting,'" Moyer says. "I want to say something, but he's a young kid and I don't know how he's going to react. So he comes in and he's standing there and I say, 'You know Cole, regardless of how you did today, the biggest thing you can do is take something positive from this game and move forward.'"

Hamels dutifully nodded, said "OK," and a rapport was born.

When the Phillies played in New York recently, the cameras caught Moyer and Hamels leaning over the dugout rail, just a veteran and a rookie talking ball. Moyer, his teammates notice, has a fatherly tone of voice that makes everybody pay attention. "It's a gift he has," Coste says.

Payback time
Moyer remembers how much it meant to him when he broke in with the Cubs in 1986 and Rick Sutcliffe and Scott Sanderson would sit him down in the dugout and talk ball. A few years later, Moyer passed through Texas and learned from watching Charlie Hough, the chain-smoking, wisecracking knuckleballer, and Nolan Ryan, the meticulous fastballer for the ages.

"I'm looking at these guys thinking, 'Geez, they're pretty cool," Moyer recalls. "It was almost like Oscar and Felix."

Now Moyer is the savvy veteran, with a track record of community service and lots of middle-age interests. He's partial to classic rock and lists Led Zeppelin, Leonard Skynyrd and Jethro Tull among his favorites. He collects wine and likes to drink a glass on occasion. And he recently broke down and bought an iPod, a shock to his children considering he's almost computer illiterate.

Both pitchers enjoy a round of golf, although Hamels had to stow his clubs when he hurt his back last year. He regards them with a sense of longing every time he passes and sees them sitting unused in the corner.

Will Hamels and Moyer get a chance to tee it up together as teammates in 2007? No one can say. Moyer's contract includes a $4.75 million mutual option for next year. His wife and kids are back in Seattle, he just moved out of a hotel in New Jersey, and the Phillies are still scrapping for a postseason berth, so he's willing to wait until his head is clear to contemplate his future.

One teammate, for sure, is hoping he will return.

"I can't say much because I'm so young," Hamels says. "It's up to the guys upstairs. But I would definitely like that."

Maybe this Rent-a-Mentor arrangement has legs. For now, Father Time and Kid Changeup are making the most of it.

Jerry Crasnick covers baseball for ESPN Insider. His book "License To Deal" was published by Rodale. Click here to order a copy. Jerry can be reached via e-mail.