Paxton Crawford was a top pitching prospect who went 5-1 in 15 games for the Red Sox in 2000 and 2001. Then, back problems -- which he blames on steroid use -- derailed the right-hander's career, which ended in the minors in 2005. Now 28, he's back home in Arkansas, working on his family's farm.

I always envied the guys with rubber arms. I was the type who was always in
pain. During minor league spring training with the Red Sox in 1999, some of
the other guys saw I was hurting. They told me that if I took this stuff, it
would make the pain go away and cut my recovery time in half. Shoot, why
not? I'm just a country boy; I didn't even think twice. It seemed like
everybody else was doing it, so it wasn't a big deal, right? But steroids
are like any drug: Once you try them and they make you feel good, you're
always going to want more. 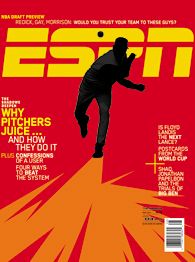 I started off injecting myself in the ass with 1 cc of Deca every week, a
lot less than some guys were taking. I was also introduced to Winstrol, or Winny. That was the big thing with pitchers -- a combo of Winny and Deca. Winny would improve your fast-twitch muscles and help you gain velocity. Deca, which is oil-based, would keep your tendons and joints lubed up and make you feel better the next morning.