The Morning After brings all the usual symptoms. Headache. Dry mouth. Listlessness.

If I feel this bad, Red Sox Fan thinks to himself, how must Beckett feel? 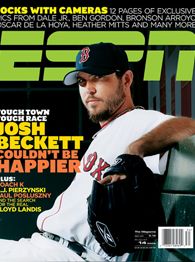 Fan is very concerned about what's going on in Josh Beckett's head, especially after watching him give up seven earned runs in 4 1/3 innings to the light-hitting A's on July 14 -- part of a 15-3 Fenway drubbing in which Beckett also served up his major league-leading 27th long ball. Fan has seen the big right-hander rage around the mound all season. Seen him shout down Ryan Howard for admiring a towering fly ball in a meaningless spring training game. Seen him scream at Shea Hillenbrand for questioning an umpire's strike call. Seen him pump his fist after early-inning punchouts. So an emotional guy like Beckett would have to be on suicide watch after the A's game, no?