Once upon a time, the A's ran the ultimate baseball frat house. Jason Giambi
set the tone, and those Oakland teams were big and hairy and powerful. They
clubbed homers, partied into legend and assaulted eardrums with their
clubhouse music. Every September, they showed up fashionably late and banged
on the door of the pennant race. 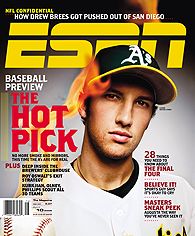 But every October, the baseball gods cruelly revealed their weaknesses -- pulled down their pants, in a sense, and exposed
their shortcomings for everybody to see. Misplaced outfielders misplayed fly balls (sorry, Terrence Long), slow runners got tagged out (apologies, Jeremy Giambi), second-line
pitchers got pounded (excuse us, Fill in the Blank). The A's have had nine
chances this decade to clinch a playoff series, and every time, they've
lost.

Eventually, GM Billy Beane had to break up the frat brothers because of
budget limitations. But a funny thing happened: Now reconstituted, the A's
are defensively superb -- perhaps better than any other team. Their rotation is
excellent, with Barry Zito and Rich Harden in front of Dan Haren and Joe Blanton, who
combined to go 25-12 after May 29. Their position players, almost without exception, run well.
Their 22-year-old closer, Huston Street, thrives on pressure. The baseball
gods might not have the A's to kick around anymore.