In the tight-knit world of baseball in the Dominican Republic, the legend of the kid spread quickly. He was a switch-hitter with world-class speed, an arm nobody would challenge and the body of a man. Someone called him El Marciano, and the nickname stuck. The Martian, it meant. Because there was no way he was from this world.

The praise for Jasson Dominguez started when he was barely a teenager, and it abounds still. And come this Tuesday, when he is expected to formalize a deal with the New York Yankees that includes a $5 million signing bonus, the 16-year-old center fielder instantaneously will become the most fascinating prospect for the game's most storied team, his debut next year eagerly anticipated by those who haven't seen him as well as by those who have.

That latter group includes general managers, international scouting directors and other front-office personnel -- professional skeptics -- who still can't help but lavish Dominguez with the sort of compliments reserved for the top 1 percent of the top 1 percent. Nearly every description begins with a caveat that goes something like: "I know this sounds crazy, but ... "

"But," one general manger who has seen him said, "he's like [Mike] Trout. And Trout wasn't close to this good when he was 16."

"But," an international scouting director who tried and failed to sign Dominguez said, "it's like Mickey Mantle. He's not 6-foot. He's a switch-hitter. He's got crazy power. He's fast as s---. He loves playing."

"But," another general manager said, "he's like -- what's that running back's name? The short, strong one? Maurice Jones-Drew. He's all muscle. But it's not stiff. He's twitchy. Can move in all directions."

July 2 is the annual signing day for international amateurs, and in recent years as technological advances and superior scouting practices have helped better identify the best Latin American players, Dominguez has distinguished himself on raw numbers. He regularly reaches upward of 110 mph exit velocities swinging from both sides of the plate. Only 28 major leaguers have hit a ball 110 mph at least 10 times this season. Dominguez, two scouts said, has clocked around 6.3 seconds in the 60-yard dash. That's faster than Mo Hampton, arguably the best athlete in the MLB draft class of 2019, who decided instead to play cornerback at LSU this year.

This is not like the days of Jackson Melian, a hyped Yankees prospect from Venezuela who never made the major leagues. The conviction is stronger, the signings seen less as gambles and more as investments. It's what invites the comparisons -- that they're not based on physique or some other intangible alone.

"Jasson has a game that's very much like Mike Trout -- except he's a switch-hitter," said Ivan Noboa, Dominguez's trainer in the Dominican Republic. "It's a hard name for me to say, because it's really high expectations for a 16-year-old. But what Jasson is we all know. I know it's a little bit unfair to put them next to each other. It's a heavy weight to carry. But if someone can do it, it's him." 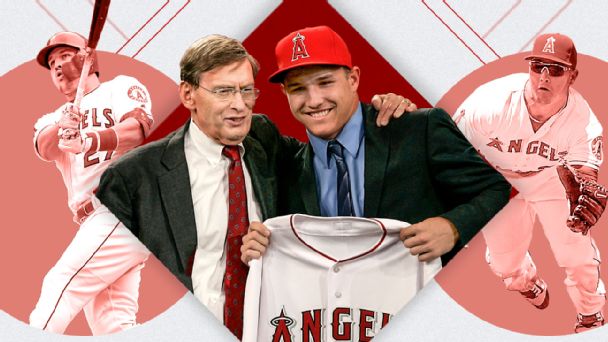 Why did the Mickey Mantle of our time last until No. 25? A decade later, those who know best detail how it happened. Keith Law

Dominguez arrived at Noboa's academy around his 13th birthday. Even then, he cut a strong figure, different from the wiry boys Noboa had hoped would grow into something. Today, Dominguez is 5-foot-11 and 195 pounds, the exact measurements Mantle was listed at during his playing days.

Every day at Noboa's academy, Dominguez woke up before the sun rose and started his training regimen. He was a natural left-handed hitter whose right-handed stroke caught up. He took reps at shortstop and even catcher, but his speed suited him best in center. At one point, Noboa said, he started to think about where Dominguez stood among those he had trained, including Texas Rangers outfielder Nomar Mazara. That answer was clear: the best.

"I've been doing this for a long time," Noboa said, "and it's not just the guys who train with me. He's the greatest talent I've seen."

It's a talent few have seen by design. Unlike the Dominican Prospect League and International Prospect League, organizations that showcase young Latin American players across a multitude of games, Noboa prefers private workouts. Dominguez rarely if ever played in games against teams comprised of non-Noboa-trained players. One international scout said it scared him off of Dominguez.

That didn't stop others. Among those who expressed significant interest in signing Dominguez, according to sources, were the Rangers, Tampa Bay Rays, St. Louis Cardinals and Los Angeles Angels. Each was fighting an uphill battle, considering the history of the Dominguez family.

"Jasson has a game that's very much like Mike Trout -- except he's a switch-hitter. It's a hard name for me to say, because it's really high expectations for a 16-year-old. I know it's a little bit unfair to put them next to each other. It's a heavy weight to carry. But if someone can do it, it's him." Ivan Noboa, Jasson Dominguez's trainer

The Yankees' affinity for Jasson Dominguez can be summed up by his cost. Rarely does a 16-year-old Latin American player demand $5 million, let alone get it. In an unrestricted market, a player like Dominguez, two international directors said, would receive at least a $10 million bonus. The league's collective bargaining agreement limits what teams can spend on international amateur talent. The largest bonus pool is $6.48 million. The Yankees' limit is slightly less than $5.4 million. Essentially, they believe Dominguez is worth more than 90 percent of their pool, which itself says something considering the Yankees' recent success in the Latin American market.

The reality: Every team knows how valuable a high-caliber prospect can be. Fernando Tatis Jr. and Vladimir Guerrero Jr. project to be worth hundreds of millions of dollars each. Even though he's only 18, Wander Franco, now the game's No. 1 prospect, could well develop into a $100 million shortstop for the Rays. Before Dominguez, Franco had received the largest signing bonus since fixed pools were instituted: $3.825 million. Dominguez, multiple evaluators said, is that level of player -- "and he might be better," according to one.

Rays phenom Wander Franco will soon join Acuna, Vlad Jr. and Tatis among MLB's new generation of superstars. And he just might be better than all of them. Jeff Passan

Even his most ardent fans acknowledge that because Dominguez is so strong, so fully developed at 16, there might not be room for the sort of growth Tatis experienced as he filled out. Neither that nor the lack of outside game action gave two international scouts pause. What Dominguez possesses now, they said, is plenty.

He can't show it until next year, as 16-year-olds don't play the season they sign their contract. Which means Yankees fans must wait. The baseball world too. The good news is that now they have plenty of time to prepare themselves for something they'll believe only when they see. Orson Welles was right after all. The Martian is coming.