Longtime baseball woman Kim Ng was announced as the new general manager of the Miami Marlins on Friday. It was a hire 15 years in the making. Or was it 93 years?

It has been 15 years since Ng first interviewed for a GM position in Major League Baseball -- an opening with the Los Angeles Dodgers in 2005. But it has been 93 years since the first time anyone was hired by a pro team as a general manager. Billy Evans was the first to assume that title, for the Cleveland Indians in 1927.

There are troglodytes sure to fight me on this, but let me assure you: In those 93 years, there were women before Ng who were qualified for the job and lost it because of fear. Not their own fear, mind you. Every woman who has worked her way up to the highest levels of a male-dominated business has been overqualified, tough as nails and afraid of nothing save perhaps the fragility of men standing in the way of her success one more time.

Things got a little easier for those women on Friday when Ng broke a long-standing glass ceiling, becoming the first female GM in a major North American men's professional sports league. And it got easier for Asian American girls and boys who love baseball -- Ng is also baseball's first Asian American GM. So it is meaningful that just days after Vice President-elect Kamala Harris rose as an example to the country and the world of what a woman can become -- a Black, South Asian American woman, at that -- another woman has arrived on the scene to hammer the point home.

Anyone with half a brain -- my apologies to the aforementioned troglodytes -- could tell you that Ng is as qualified as they come for the opportunity she has earned.

Although she is just 51 years old, her baseball career spans 30 years. (Fun fact: When the Milwaukee Brewers hired GM David Stearns in 2015 he had been alive for 30 years!)

Ng started as an intern with the Chicago White Sox at age 21, worked her way up to a job as the American League's director of waivers and records and then, at age 29, became the youngest assistant GM in MLB, working for Brian Cashman and the New York Yankees. She joined the Dodgers as vice president and assistant GM in 2001 and left to serve as senior vice president of baseball operations for MLB in 2011. Before being named GM for the Marlins on Friday, she had interviewed and been passed over for at least five open GM positions.

When Ng became the highest-ranking woman in professional sports management on Friday, it was both a cause for celebration and a moment to think of those who came before her and were denied. Because, of course, the problem has never been women not working hard enough, being knowledgeable enough or "fitting in." It has always been whether the gender that acquired power eons ago because they could physically wrest it from us would dare abandon the idea of strength as power and let their brains lead the way.

In 2015, Joe Torre, Ng's boss at Major League Baseball and her former colleague with the Yankees, told Jim Caple that the only thing between Ng and a GM job was the people doing the hiring.

"I always talk her up at owners meetings," Torre said. "At some point, somebody just has to ignore the fact that she's a woman and just make a baseball decision. And if they do that, then I think she will get an opportunity. Somewhere.''

In March of this year, Ng joined my radio show for our "Game Changers" segment, which honors women breaking down barriers in sport. She talked about the challenges she has faced as one of the only women in the room throughout her career, and the importance of earning the trust and respect of leaders like Torre.

"I think there are examples of guys," she told me, "particularly early on in my career before I had really risen the ranks, who just hadn't seen women before, in the front office or out on the field before batting practice. There's a novelty about it, but definitely some side-glancing going on. One of the things I've really tried to do in my career is to prove myself day in and day out and make sure I align myself with people who can be influential, and who have really good reputations."

Her list of mentors -- a who's who of baseball leadership -- speaks to that goal. Torre, Cashman, Dan Evans, Bob Daly, the late George Steinbrenner. Several shared support for Ng's hire on Friday via statements or social media.

"Thrilled for Kim Ng, who has been the most qualified candidate for vacant General Manager jobs for an extended period, and has finally been rewarded," tweeted Evans, a former Dodgers GM. "A great day for baseball, professional sports, and our society. Congrats to the Marlins on a truly great hire." 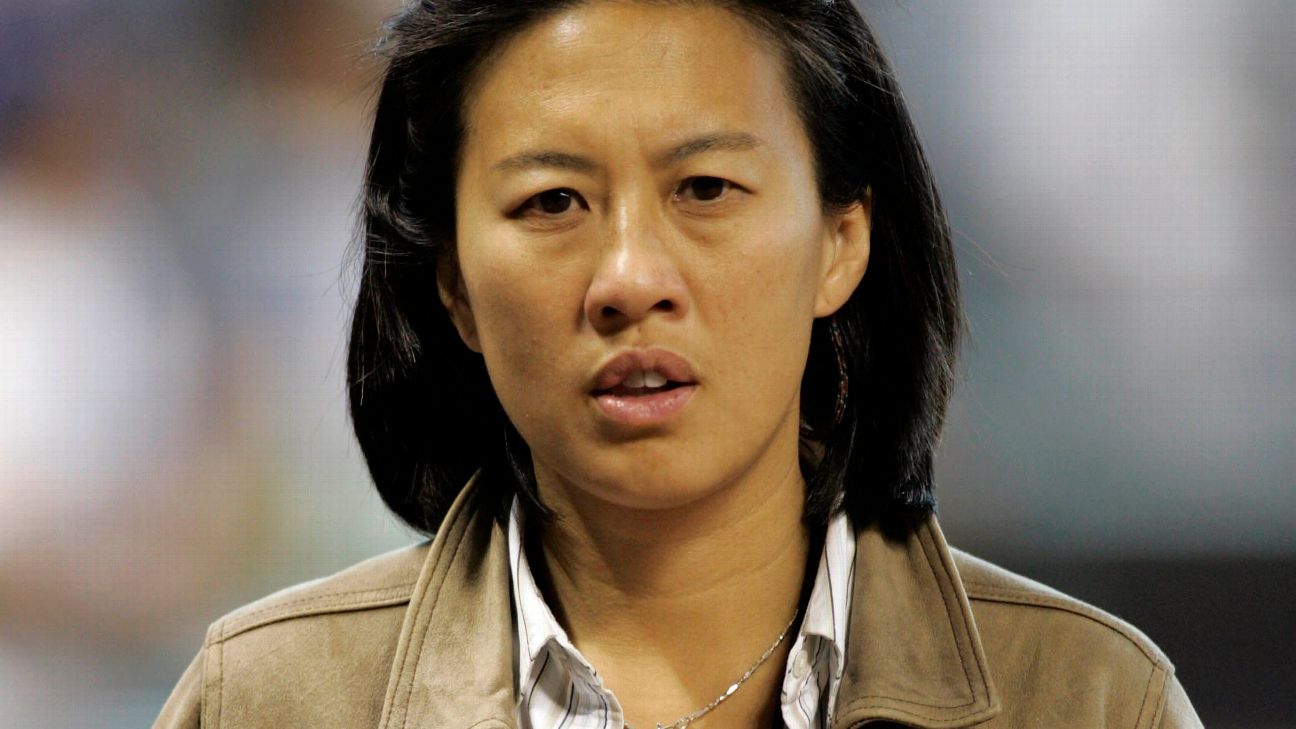 ESPN's Sarah Spain welcomed Kim Ng in March to talk about her groundbreaking path in baseball. On Friday, Ng was named the Miami Marlins' general manager, making her the first female and first Asian American GM in MLB. Listen

Cashman, who paired with Ng for three Yankees World Series titles, said in a statement, "It is wonderful seeing people accomplish their stated goals, and this has been a dream of hers for as long as I've known her. ... She will provide the Marlins with vast experience and institutional knowledge along with a calm demeanor and an amazing ability to connect with others -- all of which will serve her well in her new leadership role as head of baseball operations."

In her statement Friday, Ng acknowledged she wasn't sure this day would come.

"This challenge is one I don't take lightly," Ng said. "When I got into this business, it seemed unlikely a woman would lead a Major League team, but I am dogged in the pursuit of my goals. My goal is now to bring Championship baseball to Miami. I am both humbled and eager to continue building the winning culture our fans expect and deserve."

In Miami, Ng will work with familiar faces: CEO and part-owner Derek Jeter, who was also a key contributor to the aforementioned Yankees titles, and skipper Don Mattingly, who coached and managed with the Dodgers under Ng. They are just two more big names who can vouch for the quality of the GM the Marlins just hired.

"It's been a hard situation," Ng told "Game Changers" of being a woman in baseball. "It's gotten better, but we still have a long way to go."