There are tough losses. And then there is the kind of loss the Reds suffered on Sunday: It's like when you're out for a walk on a beautiful sunny day and you see the cutest little puppy who greets everybody with its tail wagging 100 mph and then you go up to say hello ... and the puppy growls in your face. You suddenly feel empty, devoid of the joy you felt just a few seconds prior.

I'm guessing that's how Reds fans felt in the bottom of the eighth inning.

Heartbreaking isn't the right word for a game like this. Rookie Hunter Greene, the much-hyped prospect with the blazing fastball, entered his start with a 7.62 ERA. It had been a challenging first five weeks in the majors for the 22-year-old, who had allowed 11 home runs -- the most in the majors. But there he was, throwing the game of his young life against the Pirates. He had tossed seven no-hit innings, breezing through the bottom of the seventh with two strikeouts to take his total to nine. He also had thrown 103 pitches. The odds of him finishing the no-hitter were slim to none. The most pitches any starter -- let alone a rookie -- had thrown in 2022 were 116. Only three others had even reached 110. Greene still had six outs to go.

Not only that: The Reds had also failed to score, so it was a 0-0 game.

The safe (and probably smart) move: Take the kid out. Let him finish on a positive note and earn a much-needed boost of confidence after a strong performance.

Reds manager David Bell sent Greene out for the bottom of the eighth.

"He pitched his way into having an opportunity to go nine innings, get a win and a no-hitter. In my book, that's what it was," Bell said after the game.

There are two ways to look at the decision:

So, there's room to defend Bell if you like, but it's certainly a questionable decision. Greene got the first out of the eighth on two pitches. Then he walked Rodolfo Castro on a 3-2 slider. Then he walked Michael Perez on seven pitches. Finally, the hook.

Bell didn't seem to second guess himself after the game. "Looking at it now, I think it would have to have gone really easy for him to go back out there for the ninth, but I think there was a chance he could have done it," he said.

But how likely was that, actually? Greene had averaged 14.7 pitches per inning through his first seven innings, so Bell should have been estimating at least another 28 pitches -- which would have taken Greene to 131. The last pitcher 22 or younger to throw 130 pitches in a game was Matt Cain, way back in 2006. Was Bell prepared to let Greene throw 130 pitches?

Whatever his intent, after Greene left the field: Then came the puppy growl. Reliever Art Warren walked Ben Gamel on four straight pitches to load the bases. Ke'Bryan Hayes hit a double-play ball to second base, but -- this is the Reds, after all -- second baseman Alejo Lopez double-clutched on his toss to the shortstop and Hayes beat the relay throw to first as the run scored. The Reds went down feebly in the ninth and the Pirates won 1-0, just the sixth team since 1901 to win without getting a hit.

To put it another way: The Reds became the sixth team to lose without allowing a hit. We're less than two months into the season -- but is it even possible for there to be a more depressing moment this year for a team that is now 9-26?

Note: It's not even an official no-hitter, as no-hitters must go at least nine innings (the Pirates, up in the ninth, didn't bat in the bottom of the inning) -- and that's aside from whether combined no-hitters should even count. (No, they shouldn't.)

"It would have been great to have a different result," Greene said, "but it is what it is."

Just for fun -- or pain -- let's compare the Reds' heartbreak to the other five instances of this occurrence:

The Dodgers' run came in the fifth inning: Jered Weaver threw away Matt Kemp's little tapper for an error, and Kemp stole second and advanced to third on a throwing error. He then scored on a sacrifice fly. Weaver, who would throw a no-hitter in 2012, was lifted for a pinch-hitter in the top of the seventh. The Angels would get two runners on in the ninth, but Reggie Willits struck out to end it.

Heartbreak factor: Two broken hearts out of five. It was against the Angels' crosstown rivals, in front of 55,000 fans at Dodger Stadium, but at least the run came early. It also helped that the Angels were in first place at the time -- they'd go on to win 100 games.

What's going on with the baseball?

We dig into the topic shaping the season and what it means for MLB's future.

Everything you need to know

Older readers might remember Matt Young, a talented lefty who made the All-Star Game as a rookie with the Mariners in 1983. But Young had control issues and also developed a phobia about throwing to first base when fielding his position (he made nine errors in 1990). In this game, Young would pitch all eight innings -- and Cleveland would score without a hit in two separate frames. In the first inning, Kenny Lofton walked, stole second and scored on shortstop Luis Rivera's throwing error. In the third, after Young walked the first two batters, a run scored on two fielder's choices. Young ended up with seven walks and six strikeouts while throwing 120 pitches.

Heartbreak factor: Two broken hearts. This was just the fourth game of the season -- although it would be a prelude for a miserable season in Boston. The Red Sox went 73-89 under Butch Hobson and finished in last place for the first time since 1932. Young pitched in 27 more games that season, going 0-4 with a 4.58 ERA. (He won just one more major league game, in 1993).

This is probably the most famous of these games, in which Andy Hawkins tossed eight no-hit innings -- and somehow allowed four runs. All the damage came in the bottom of the eighth, with two outs and nobody on. Third baseman Mike Blowers bobbled a hard grounder -- the batter was a young outfielder named Sammy Sosa, who was absolutely flying down the line. It was a play that could have been ruled a hit (and might have, earlier in the game).

Then things really got silly. Sosa stole second, then Ozzie Guillen and Lance Johnson walked to load the bases. Robin Ventura flew out to left field -- and Jim Leyritz drifted back on a windy day at Comiskey Park and dropped it for an error. All three runners scored. Ivan Calderon then lifted a fly ball to right field, which Jesse Barfield lost in the sun and dropped for another error, allowing Ventura to score. "Holy cow," exclaimed Yankees announcer Phil Rizzuto. Indeed.

At the time, Hawkins' game was considered an official no-hitter because he threw a complete game (the rules were later amended to include only complete games of at least nine innings). "I'm stunned. I never envisioned a no-hitter like this," Hawkins said at the time. "You expect to walk off the field shaking hands with a lot of jubilation."

This one went the full nine innings, and both Detroit runs came in the top of the ninth. Steve Barber, a hard-throwing but wild left-hander, was the Baltimore starter, and he had walked seven batters entering the ninth, so it wasn't exactly a gem. He walked the first two batters of the ninth -- there was a sacrifice bunt, then Willie Horton popped out to the catcher, leaving Barber one out away. He proceeded to throw a wild pitch, allowing the tying run to score, and then issued his 10th walk of the game. The Orioles brought in reliever Stu Miller, who induced a grounder to shortstop -- except Orioles second baseman Mark Belanger dropped the throw, allowing the second run to score.

Heartbreak factor: Three broken hearts. A tough one, but Barber's control problems did most of the damage.

First-month grades for all 30 MLB teams 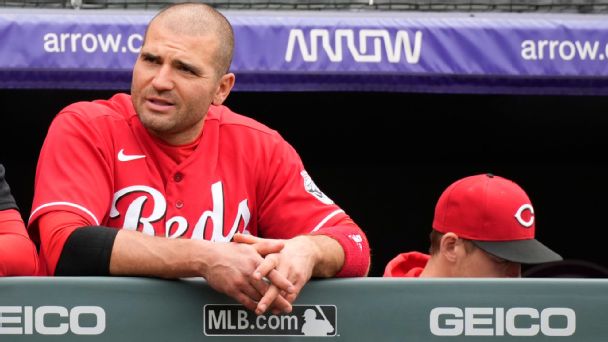 With their hot starts, it's no surprise the Yankees and Mets top our list as we give out our April grades.

Handing out A's and an F-minus-minus

Houston's Ken Johnson and Cincinnati's Joe Nuxhall were locked up in a scoreless duel through eight innings. Nuxhall led off the top of the ninth and grounded out. Pete Rose, trying to bunt for a base hit, reached second base when Johnson threw it away. After a groundout, Vada Pinson grounded to second base -- but Nellie Fox booted it to allow Rose to score. Johnson completed the no-hitter but lost the game when Nuxhall finished off his shutout.

Heartbreak factor: Five broken hearts. Johnson remains the only pitcher since 1900 to get credit for an official no-hitter (since he went nine innings) and lose the game.

This year, the heartbreak factor is an easy call: Given the miserable start to this Reds' season, this could have been a rare moment of joy. Instead, it's five broken hearts. Hunter Greene will have many more good days ahead to make happier memories -- maybe even a no-hitter that actually counts. And as for the Reds, Bark in the Park at the Great American Ball Park is June 8. Let's hope the stadium is full of happy dogs.