Much was made of the recent contract extensions signed by these four, but now that we've got the (relatively) easy deals out of the way, it's time for the difficult ones. 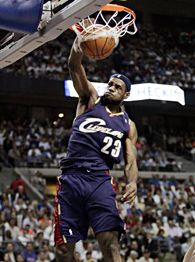 The draft class of 2003 is eligible to receive contract extensions between now and Oct. 31. With the "Big Four" superstars out of the way, 20 of the other 25 first-round picks from that class are eligible to sign extensions.

(The five who aren't eligible are Ndudi Ebi, Marcus Banks, Troy Bell and Reece Gaines, whose teams didn't pick up their fourth-year options, and Carlos Delfino, who didn't start his contract until a year later.)

None of the 20 deserves a maximum deal, but several players, including Josh Howard, Kirk Hinrich and Boris Diaw, have done enough to earn big paydays.

But that doesn't mean they want to jump at an extension, even though it provides security. They might prefer to wait and see, because a year from now they will be restricted free agents and might see their value rise.

Likewise, the team might want to wait and see the player establish his value, especially if he's asking for too much money.

While extensions don't get as much attention as free agency, these are huge decisions. A bad extension is just as damaging as a free-agent bust -- witness Mike Dunleavy's five-year, $45 million extension a year ago, or the six-year, $65 million deal the Timberwolves gave Wally Szczerbiak in 2002 that they almost immediately started trying to get rid of.

Conversely, a good deal yields a bargain for years, such as the four-year, $24 million extension that Al Harrington just finished, or the three-year, $8.2 million deal Charlotte struck with Primoz Brezec.

So in the big picture, this topic is so important that I've taken a brief break from developing my much-anticipated RER formula to take a closer look at the class of 2003 extension candidates.

Included with each player I have my best guess at what kind of deal he'll end up with. Here's the forecast: