After tonight, only a select few will be able to make the same claim as Dick Bavetta, and we mean a very select few. Guys like Lou Gehrig and Cal Ripken. 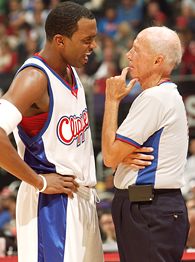 Bavetta will work his 2,135th consecutive game Wednesday night when the Knicks play the Nets at the Meadowlands, breaking Jake O'Donnell's record for most career games worked by an NBA official. The NBA counts only regular-season games, so Bavetta's total is actually much higher with his 214 postseason assignments, including 23 NBA Finals games.

As impressive as it is from a numerical standpoint, Bavetta's streak is even more incredible when considering how many assigned games he has missed.

That number would be zero.

"My secret is wearing five pairs of socks," Bavetta told ESPN.com. "I just believe in taking care of my feet."

His feet aren't the only thing Bavetta takes care of, but he needs those extra socks to withstand all the pounding he puts on his lower extremities. Bavetta jogs eight miles each morning and spends 3½ hours working out each day in the summer, mountain biking and rowing a wooden boat on Lake George in upstate New York, after taking a one-day vacation when the NBA Finals end to treat himself to a day of rest and his annual ice cream cone.

"It's added to my longevity," said Bavetta, who is a lean 160 pounds at age 66 and is the only official to work 31 NBA seasons.

When he tosses up the opening tip Wednesday night at the New York-New Jersey game, it might just be Bavetta's proudest moment of a refereeing career that never would have taken off if not for the advice of his older brother, Joe, an official in the ABA and the Eastern League who also worked Wall Street League games in downtown Manhattan, where Brooklyn-born Dick began refereeing as he was embarking on a career in the finance industry on the trading desk for the brokerage firm Salomon Brothers. Joe's contacts included Harry Rudolph, the father of former NBA ref Mendy Rudolph, and he helped brother Dick get the gig working his first professional game in 1966, New Haven versus Hartford in the Eastern League.

For nine years, Bavetta tried to break into the NBA, watching year after year as the league stubbornly stuck with two-man crews. Invited to a referees' camp in New Orleans in 1975 but bitter that the hiring process had amounted to a nine-year wait, Bavetta turned the invitation down.

"My brother called me up and told me I was a schmuck. He said 'Let me get this straight: The NBA is flying you down to one of the best cities in the country, putting you up in a hotel and paying for all your meals. And you want to turn that down? Why?'"

Bavetta took his brother's advice, went to New Orleans with more than a dozen other prospective officials and ended up becoming the only one hired a couple of weeks later when Mendy Rudolph retired.

"I got the one hire in '75; I thanked my brother for making me change my mind; and the rest, as they say, is history," Bavetta said.

But his history wouldn't have included an uninterrupted streak of 2,135 assignments if not for some luck, some long drives and some emergency medical attention.

During an Indiana-New York game in the late '90s, Jalen Rose accidentally struck him in the face and broke his nose. "It looked like a pancake," Bavetta recalled.

He was scheduled to work two nights later in East Rutherford, N.J., and the Knicks' team doctor initially told him to forget about it. But when Bavetta argued his case and said he planned to work whether the doctor liked it or not, she relented, operated on him the morning after the game, then met him the next day several hours before tip-off -- delaying the start of her ski vacation to do so -- to change the packing inside his nose. When he finally emerged from the tunnel a few minutes before tip-off, the scorers table was staffed by people wearing breathing strips across their noses in mock tribute to the senior referee who has been one of the few constants in the NBA across the past three decades.

There were weather stories, too, such as the 6½-hour drive from Milwaukee to Detroit through a snowstorm when Bavetta had an inkling his scheduled flight at O'Hare would be grounded, which it was.

Last season, there was another long drive from Toronto to Cleveland when Bavetta had to work a back-to-back but arrived at the airport in Toronto to find his small plane encased in ice after the airport authorities ran out of deicing fluid. Some 5½ hours later, his rental car pulled off the highway in downtown Cleveland and his streak survived.

Bavetta lists a Celtics-76ers game in the early '80s as his most memorable moment, recalling how he worked most of the game alone after his partner, Jack Madden, broke his leg in a collision with Dennis Johnson.

"I'm trying to keep this game under control, but at one point I look over and Bird and Dr. J are strangling each other. I ejected both," Bavetta said. "The NBA started looking at me in a different way after that, saw my leadership qualities, and that was a stepping-stone for me."

Bavetta also became the first referee to call off a game because of unsafe playing conditions, which he did when condensation from the hockey ice caused pools of water to form on the parquet floor at the old Boston Garden. 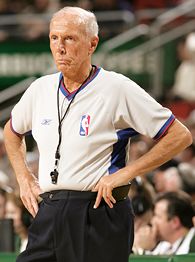 Like all referees and umpires, Bavetta has his detractors. But in his case, he has been a lightning rod for conspiracy theorists who note his presence working some of the most controversial games in recent NBA history, including Game 6 of the 2002 Western Conference finals between the Lakers and Kings, when Los Angeles went to the free-throw line 27 times in the fourth quarter to stave off elimination; the 2000 Western Conference finals, when a non-call of an apparent foul committed against Steve Smith helped seal the Trail Blazers' meltdown; and Game 7 of the West finals in 1993, when the Suns went to the foul line 64 times and defeated Seattle, among others.

"What I'll say is this: I respect his consistency. Never missing a game in 31 years, that's something," said Alonzo Mourning, who remains bitter about the outcome of several Knicks-Heat playoff games in the late '90s, some of which Bavetta worked.

Bavetta is aware of what people have said about him over the years, and it's a shot at his integrity when he hears himself impugned. One of the comments that particularly stung came when Tim Hardaway of the Heat called him "Knick" Bavetta after Miami's controversial Game 7 loss to New York in the 2000 playoffs, a game that swung on a questionable call by one of Bavetta's partners, Bennett Salvatore.

Bavetta remembers being lauded by the league office for his work in that game, and he accepted Hardaway's apology the next season when Hardaway came up to him during a game in Milwaukee and expressed his regrets for what he had said.

Bavetta was unaware of the details behind the genesis of the episode until it came up during a 2½-hour interview with ESPN.com in Miami last month. He then learned that a former New York Times reporter was the creator of the nickname, making it up on the spot in an effort to amuse Hardaway during an informal chat with writers an hour before tip-off of that fateful Game 7. The quip was still fresh in Hardaway's mind later that afternoon when he repeated it at the postgame news conference.

During the ESPN.com interview, Bavetta was surprised to hear one generalized criticism of his work: that, on any given night, he seems to blow his whistle more often than his officiating partners.

"Nobody's ever brought that to my attention before," he said with a mixture of bemusement and bristle, curious as to the public's and the media's perception of other referees and NBA officiating in general.

"Year in and year out, Dick is always one of our top-rated officials," NBA vice president Stu Jackson said. "A big factor in his ratings is his accuracy, his overall experience, his ability to manage a game and communicate with players and coaches, all of which have made him one of the top-rated officials."

For his record-breaking day Wednesday, Bavetta planned to meet a crew from NBA Entertainment at 6:30 a.m. before his morning jog down the median of Routes 1 and 9 near Newark Airport, a road where police cars have pulled up to him in the past to inform him he really shouldn't be jogging on a highway median. Bavetta has cracked up more than one police officer by asking whether he was being pulled over for going too fast.

He lists San Francisco, Miami, New York and Phoenix among his favorite jogging cities, and says motorists will occasionally greet him with a honk of the horn or a witty shout-out when they see him running down the street and recognize there's a quasi-celebrity in their midst.

"I sure don't look like an Olympian out there in all his sartorial splendor, not with my old hat and my sunscreen," Bavetta said.

OK, so maybe he doesn't look like Olympus, but he could pass for a marathon man.

If he makes it to the arena on time for tip-off Wednesday night, he can put Notch No. 2,135 on his whistle, an accomplishment no other referee -- almost no one else in the history of professional sports, in fact -- can match.