RIVER HILLS, Wis. -- Latrell Sprewell answered his front door with his face contorted into his unmistakable scowl, his anger barely under control as he made it clear he was not accepting visitors and was in no mood to talk.

"Get off my property right now or I'll send someone out there to take your head off!" 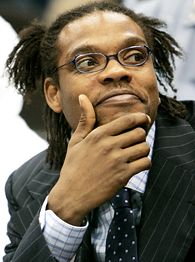 So ended the briefest of encounters early Sunday afternoon a few miles north of downtown Milwaukee, the biggest mystery of the NBA season no closer to being explained by the only person who has any of the answers.

Inside the sprawling yellow brick home with the massive wooden jungle gym in the backyard resides the best basketball player in the world without a job, an athlete who could help some team win an NBA championship three months from now if it could just get a reading on whether he's willing and/or able to set aside his shame and lace 'em up for the first time since the Minnesota Timberwolves played their final game last season.

Not a single word has been spoken publicly in almost a year by Sprewell, whose agent heard from the San Antonio Spurs and the Dallas Mavericks earlier in March, each of the Western Conference's top teams making inquiries about the former All-Star whose mercurial ways have made him one of the most controversial players of the past decade.

Seeking some answers, ESPN.com reached out to Sprewell through his agent and his publicist, as well as through voice mails on his cell phone, before resorting to the oldest reporting technique in the book -- showing up on his doorstep in the hopes that the sight of a familiar face from his days in New York might coax him into providing some sort of insight into whether he's considering a return to the NBA before this season ends.

Under collective bargaining rules, Sprewell can sign with any playoff-bound team up until the last day of the season and still be eligible for the postseason. (Players who already were on NBA rosters but who were waived in-season must have been waived by March 1 to be playoff-eligible.)

That rule was brought to Sprewell's attention by the NBA players union last week, but what -- if anything -- he plans to do with that knowledge is unknown.

The deep thump-thump-thump of a woofer-fueled bass line was causing the windows in Sprewell's front foyer to shimmer as he answered his door on the third ring wearing a sleeveless T-shirt and sweat pants. His order to skedaddle was heeded without hesitation or argument.

"Watch out for the dogs," a Bucks scout had warned.

But judging by Sprewell's demeanor and his growl, the biggest threat to life and limb was standing on two legs, not four. Good luck to the next Jehovah's Witness who tries to engage him in a friendly discussion of the Bible.

"I have no idea what's driving Latrell. I can't figure it out, and he doesn't articulate what he's thinking," said Robert Gist, Sprewell's longtime agent.

The Mavericks called about two weeks ago when they were dealing with a flurry of injuries.

"He said he would call back the next day. He never did. So we dropped the idea," Mavs owner Mark Cuban said via e-mail.

The Spurs also put in a call to Gist's office about a month ago, though nothing came of it.

"These teams recognize Latrell's value, and they've gone to their top players to ask them whether Spree would be a good fit," Gist said.

Sprewell made $14.6 million last season in the final year of a contract he signed after rehabilitating while with the New York Knicks. Sprewell led the Knicks to the 1999 NBA Finals after serving a 70-game suspension for his attack on former Golden State coach P.J. Carlesimo early in the 1997-98 season.

After turning down a three-year $21-million extension from the Timberwolves, explaining he had "a family to feed," Sprewell went unsigned last summer as an unrestricted free agent.

According to Gist, Sprewell made the mistake of waiting on the Los Angeles Lakers at a time when the Houston Rockets, Denver Nuggets, Detroit Pistons and Cleveland Cavaliers all were expressing interest in signing him. But the Timberwolves and Lakers were unable to agree on a sign-and-trade deal that would satisfy both teams, and then other teams turned to other free agents. So by the time training camps started, Sprewell's only choice was to play for the veteran's minimum, which he feels is beneath him.

"It may have been the transition, going from making $14.6 million to $1 million because the rules say you're only worth this much. Making that adjustment probably took some time," said Gist, who believes Sprewell's pride -- and his hesitance to subject himself to public second-guessing over his "family to feed" quote -- is part of what's keeping Sprewell from returning to the NBA.