LAS VEGAS -- It didn't take long for Mike Krzyzewski to screw up royally in his new job as coach of Team USA. He did it before day one was even in the books.

Rather than tell the team its job is to win the World Championship on the night of Sept. 3, Coach K gave the players exactly the kind of misguided advice they didn't need to hear.

"We have to go out there and be dominant for 56 quarters -- every quarter of every game we play. That's our mission," Gilbert Arenas told me following Team USA's first practice Wednesday. 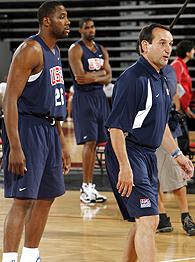 "Who on earth told you that?" I asked.

Well, Coach Mike or Coach K, or whatever you want to call him, is dead wrong, and Insider is not afraid to say so. This isn't 1992 anymore. This isn't about playing like the original Dream Team, for which Coach K was an assistant under Chuck Daly. And this should not be about restoring American dominance following three losses at the 2002 World Championship and three more losses at the 2004 Olympics.