SAPPORO, Japan -- If Chris Bosh knew several months ago what he knows now -- that he'd be buried along with Brad Miller on the end of the bench -- would he still have been willing to join Team USA?

"That's a good question. I'm not sure," Bosh told Insider on Thursday night after the U.S. wrapped up preliminary-round play with a 103-58 rout of Senegal. "I can't say that I would, but I don't think anyone would have told me that." 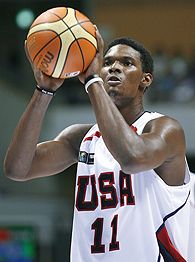