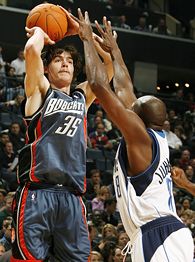 As they share the floor, they have one other thing in common -- skeptics who doubt that their college stardom will translate into big-time NBA success.

Redick's injuries and inexperience have kept him mostly on the sidelines since the summer, though he did log 16 scoreless minutes on Wednesday. He has six points on 2-for-9 shooting this season, including one 3-pointer.

Morrison, meanwhile, has had some success so far, at least superficially. He's had six games with 20 or more points, and he was selected the NBA's Eastern Conference Rookie of the Month.

A deeper study, however, reveals ample evidence thus far that the skeptics were right. Morrison averages 13.3 points per game, which leads all rookies by a wide margin -- but he is putting up 13.7 field-goal attempts per game and is shooting just 36.8 percent from the field. He's collecting only 2.8 rebounds per game, despite his 6-8 frame, and he is averaging just 2.0 assists per game, despite handling the ball often.

His player efficiency rating, which measures a player's overall contributions per minute, is 7.29 (the average PER is 15.00), which ranks Morrison last in the NBA by far among all players averaging 30 or more minutes. The NBA's only starter with a lower PER is defensive specialist Jason Collins of New Jersey, while Morrison is a disaster on defense. So, while harsh, it is fair to call Adam Morrison the worst regular in the NBA according to the stats -- at least so far this season.

But is he a bust? I don't think so. Let's dig beneath the numbers to see what kind of player Morrison is now and what kind of potential he has.