Almost every competitive playoff series reaches a point of strategic equilibrium. All the big adjustments have been made. All that is left is to rearrange the fringes: making tiny rotation tweaks; layering counter atop counter to sets the opponent has smothered in their basic forms; varying the location of those sets. It is a search for any edge that might last two possessions.

Barring the return of Goran Dragic, it felt like the NBA Finals reached that equilibrium in Game 4. Both defenses optimized. Bam Adebayo started the game on Anthony Davis, leaving Jae Crowder jostling with Dwight Howard. Howard couldn't exploit that size mismatch and had trouble chasing Miami shooters pinging off Adebayo picks. Frank Vogel started Markieff Morris in Howard's place in the second half.

Opening Week on ESPN and the ESPN App

Maybe we will see an unexpected wrinkle in Game 5 on Friday night. Maybe the Heat unearth Derrick Jones Jr. for a few minutes, or bring back zone defense in smaller doses. The Lakers have the zone solved, but it might work as a surprise to break L.A.'s rhythm. We saw a snippet of the Kelly Olynyk-Adebayo pairing, perhaps a way to limit the minutes in which three non-shooters (Butler, Adebayo, and Andre Iguodala) share the floor. The zone also protects Olynyk on defense.

But those don't shake the ground underneath this series. Dragic returning would, but that has seemed unlikely since he tore his left plantar fascia in Game 1.

You can't help but feel for Dragic. An itinerant and valiant career crescendoed to this series. Ten years ago, Dragic was a turbocharged, second-year apprentice to Steve Nash with the Phoenix Suns when he gave us one of those organic, impossible-to-predict playoff moments you know is special even as it's happening: 23 points in the fourth quarter of Game 3 of the conference semifinals against the San Antonio Spurs, Nash smiling from the bench as Phoenix snatched a 3-0 lead over its archnemesis.

Dragic never got back to the conference finals -- until this year. He wandered to Houston, then Phoenix again after the Rockets acquired James Harden. Dragic helped sabotage Phoenix's plan to tank in 2013-14, when he made his only All-NBA team. He grew unhappy; the Heat gave up a lot to rescue him. The payoff waxed and waned -- until this postseason, when Dragic played some of the best basketball of his life.

You felt his absence down the stretch of Game 4. With the Butler-Adebayo fulcrum stymied, Miami searched for offense -- mostly leaning on Duncan Robinson and Tyler Herro rocketing off picks. The Lakers were ready.

With Dragic's health uncertain, here are Big Numbers to watch as the Heat try to prolong this season.

That is the number of handoffs Butler ran as screener -- quarterback -- in Game 4, easily his highest total of the season, per Second Spectrum.

The Heat scored at a mammoth rate when those handoffs led directly to a shot, but their efficiency plummeted with every pass, per Second Spectrum.

You can track the Heat's thought process. The Lakers defanged Adebayo handoffs by downsizing and slotting LeBron on to Adebayo. These sorts of 3s, with Howard staying home instead of lunging into Robinson's vision, vanished:

(That is an outlandish shot. Both Danny Green and Kentavious Caldwell-Pope have been tireless chasing Robinson.)

LeBron can flash into Robinson's airspace and zoom back to Adebayo. Both LeBron and Davis have been attentive to Adebayo slipping picks:

That is fantastic off-ball defense from Alex Caruso, who has been outstanding all season. The Heat positioning Herro as the only weakside shooter there is not an accident. It is meant to discourage Caruso from helping on Adebayo. Caruso helps anyway, but look at how he is already leaning back toward Herro before Robinson releases his pass:

That action leverages the Lakers' go-under gambit against them. If Davis is primed to hang back, the Heat might steal an open 3 by pivoting into a Butler handoff -- forcing Davis to rush up from the paint:

Davis was mostly up to the task. He leapt at Robinson when he had to, and sprinted back to Butler. When Davis lingered on Robinson up high, he trusted teammates would cover for him:

That is a tenacious double rotation by LeBron -- from Iguodala to Butler, and then back to Iguodala.

Notice Olynyk is in Adebayo's place there. Miami has played Iguodala, Butler, and Adebayo together eight minutes in this series -- a small number, even with Adebayo missing two games. The Heat before the Finals were plus-62 in 90 playoff minutes with that trio after getting blitzed by 42 points in 45 such regular-season minutes -- one of the most remarkable small-sample turnarounds I can remember.

Against the best defenses, it becomes harder to play more than two non-shooters at once. Miami faced two elite defenses to get here -- the Boston Celtics and Milwaukee Bucks. The Lakers are just as fast as Boston, but bigger. They shape-shift more easily than the stubborn Bucks. This may be the wrong series for Butler-Iguodala-Adebayo. But if it provides a spark one more time, the Heat could extend things.

The Heat will use tricks to invigorate these handoff sets Friday night. Robinson might finagle one semi-open 3 by bolting toward the handoff and then moonwalking back to the sideline. That's a layer -- an add-on. It might buy you one or two good looks. It won't buy you three.

You could see Miami late in Game 4 cycling into more complex actions -- including some on which Robinson screened for Butler on the ball and then veered around an Adebayo pindown. Robinson might reverse course toward another Adebayo screen and zip from that into a Butler handoff. More bodies, more variations, more chances for the Lakers to mess up. Except they didn't:

That is the Heat's average points per possession on any trip when Herro runs a pick-and-roll with Butler as screener, per Second Spectrum. Not even the Harlem Globetrotters could sustain that, unless they knew Krusty the Clown had bet on the Washington Generals and had an ax to grind with America's most bitter entertainer.

Miami has run the Herro-Butler dance only 13 times, including five in Game 4. The Lakers will be primed for it.

The logic is the same: If Davis is dipping below picks against Butler, use Butler as screener -- with a threatening bomber orchestrating things. Dragic would be useful here, too. Herro has looked comfortable as stand-in.

Switch, and Butler eats against an L.A. guard. Send help, and the Heat hunt open 3s:

Have Davis corral Butler up high, and you risk a 4-on-3:

That possession is the essence of high-level postseason basketball -- two smart, well-coached teams that know exactly what the other is up to. The Lakers rotate and swarm, forcing Butler into an airborne wraparound pass. Adebayo has to pump-fake and hit a reclining banker over one of the league's best defenders. Great offense against great defense. You tip your cap.

Miami will sift through methods of punishing the go-under strategy. One might be Butler trying the occasional wide-open triple. The Heat had success setting flat screens for Butler in semi-transition -- with the screener almost facing half-court, making it hard for the Lakers to tell which direction Butler might go: 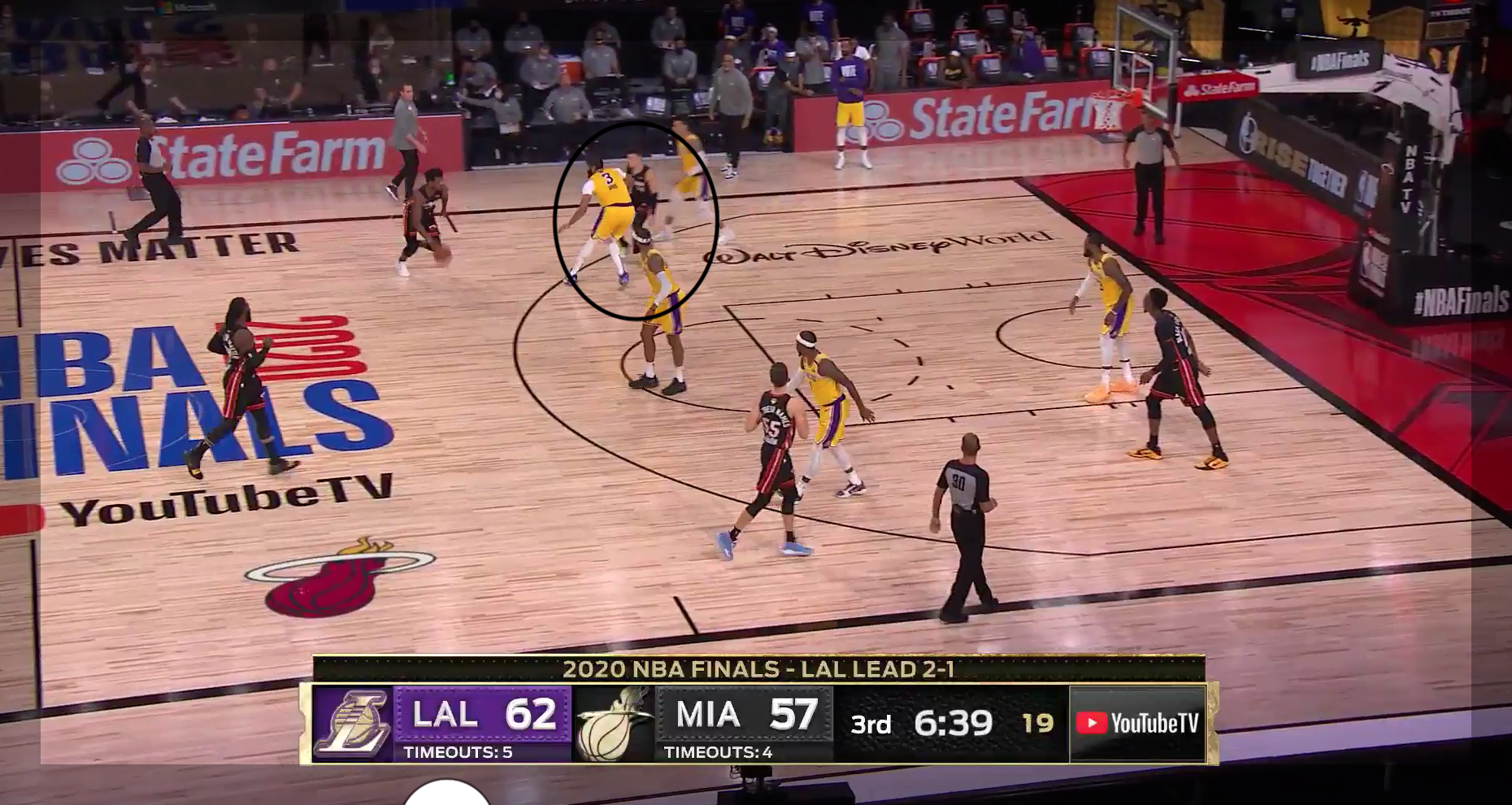 The Lakers also busted this out for LeBron. Here's Caruso screening two Heat players at once:

That is the Lakers' offensive rebounding rate. It would have easily led the league in the regular season. Adebayo's presence has made no impact on that number. Meanwhile, Miami has grabbed only 17% of its own misses -- a mark that would have ranked dead last by a mile.

That is damn near the difference in the series.

I wonder if Vogel might give Howard one more start. Howard was very close on a few early possessions to punishing Crowder on the glass and with duck-ins.

This may sound crazy, but if he's up to it physically, I wonder if Adebayo might dare some bully ball against LeBron -- both one-on-one and on the offensive glass. Maybe he can catch LeBron off guard or draw a couple of early cheap fouls on him.

The Lakers have 41 fast-break points in four games, way below their regular-season average of about 18.5 per game. That may shortchange the degree to which Miami has snuffed L.A.'s transition attack. By the tracking at Cleaning The Glass, three of the Lakers' half-dozen quietest transition games have come in this series. That is a big reason the Lakers have not gotten to the rim at nearly their normal rate. (Half their shots were 3s again in Game 4.)

The Heat have limited live-ball turnovers. If that changes, we're probably done here. Their low offensive rebounding rate is connected to this; they send almost everyone back in transition defense. One of the rare times they didn't -- when they finished a possession with three players along the baseline -- the Lakers pounced on a 4-on-3 that ended with Caldwell-Pope's pivotal triple to go up five with 2:58 left in Game 4.

That is the number of James-Davis pick-and-rolls the Lakers ran in Game 4 after using just three total over the first three games, per Second Spectrum. They didn't exactly gash Miami's defense; the Heat are switching -- Butler onto Davis, Adebayo onto LeBron -- to prevent Davis from free rim runs.

The Lakers can still scrounge points. Butler requires help against Davis in the post after switches:

Remember: Davis is guarding Butler on the other end. After L.A. stops, the Heat might be stuck with that matchup. Davis can sprint into deep post-ups.

Crowder has more experience defending big guys -- and fronting Davis. I wonder if the Heat might experiment some with Crowder on LeBron, which would leave Crowder on Davis after switches.

The Lakers also ran some screen-the-screener plays -- with Davis getting a pick in the paint before rumbling up to screen for LeBron -- to pry open space for their stars.

They used the sides of the floor in smart ways -- including clearing one side for plays on which LeBron screened for Caruso:

That play fails, but the lob to LeBron is there. If the Heat are packing the paint, the Lakers can shift action out of the paint.

LeBron did that on some of his pick-and-rolls with the Lakers' guards -- having them screen near the sideline and flare to the corners, where there were no help defenders nearby (a tactic I mentioned ahead of Game 4). Here's Green about to rattle in a corner 3: 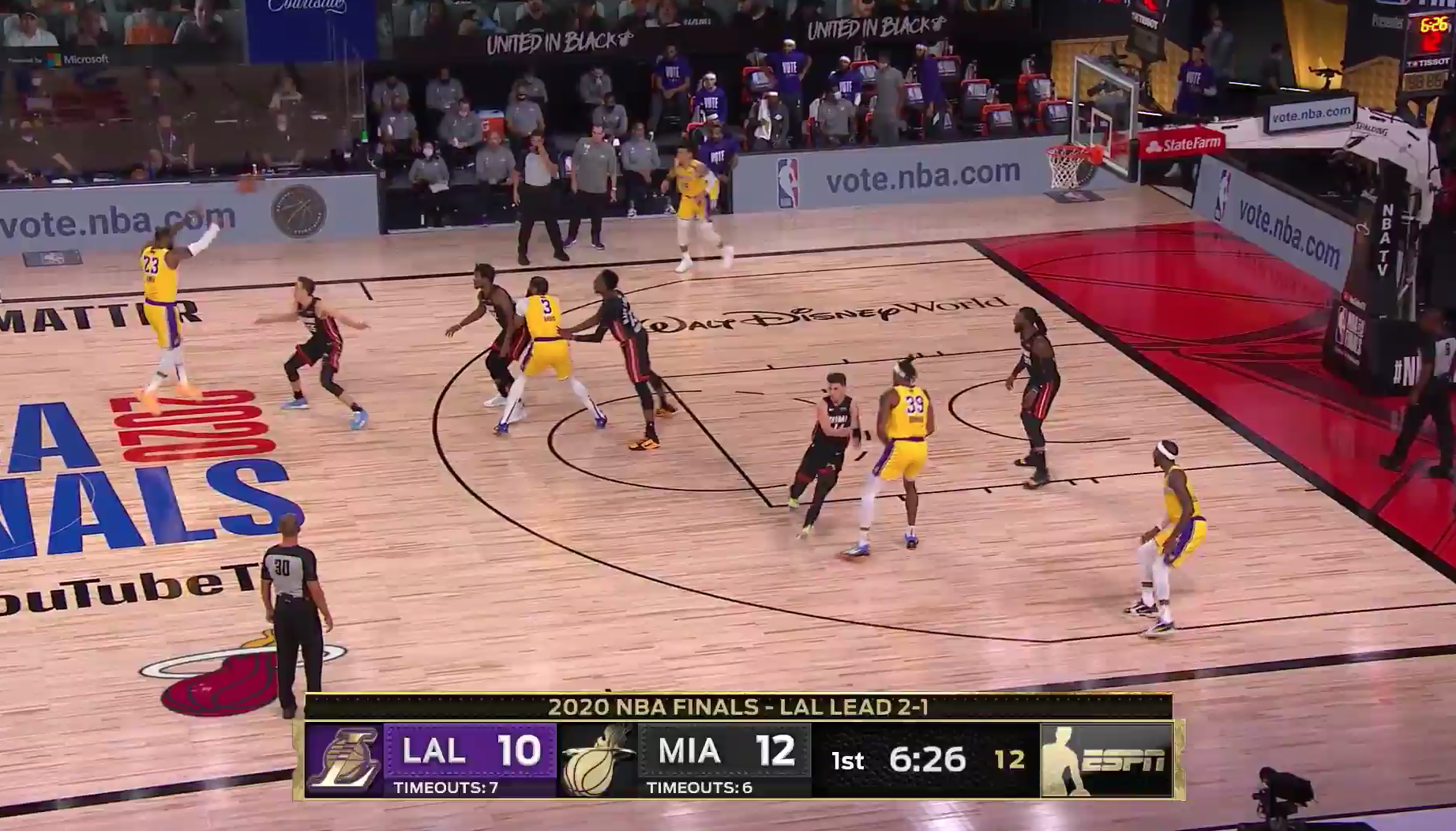 Davis has done well when given the chance to run pick-and-roll. Why not bust out a Davis-LeBron two-man game?

LeBron dabbled in Game 4 in some off-ball split actions with his guards -- including Green here:

That can produce switches and give L.A. a head start into the LeBron-Davis pick-and-roll.

This is the nitty-gritty of playoff basketball. It is all that remains when two great teams -- and the Heat have emerged as that -- exhaust their go-to adjustments. Maybe one coach has a big surprise in store. If not, the Lakers will chase their 17th title against a fearless opponent ready for anything.