Sometimes when you roll the dice they come up snake eyes, and that was the case for the Clippers last season. Coming off a 37-win season that saw them fall prey to the usual Clipper-killers of bad depth and worse luck, L.A. took drastic steps to rebuild its backcourt and make a push for the playoffs. The Clippers signed guard Cuttino Mobley to a five-year deal, let swingman Bobby Simmons walk as a free agent and signed and traded guard Marko Jaric to Minnesota for veteran Sam Cassell. 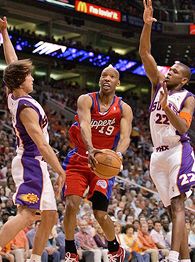 The gamble was that Cassell would stay in one piece and Mobley's durability would help mask a weak bench. Both bets paid off. Cassell bounced back with 17.2 points per game and stayed in the lineup for 78 games, while Mobley soaked up nearly 3,000 minutes at shooting guard to cover the loss of Corey Maggette for much of the season.