And the drought goes on. It's been 12 long seasons since the Golden State Warriors last qualified for the postseason, and in most of them they haven't even come close. 2005-06 was supposed to be the year that changed, as the acquisition of Baron Davis and the development of several recent first-round draft picks had the Warriors touted as one of the league's up-and-coming teams. 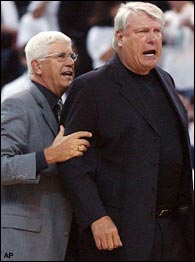 Instead it was more of the same. The Warriors got off to a strong start, going 12-6 out of the gate, and stayed in the playoff race for three-quarters of the season. But a 6-19 swoon after the All-Star break sent Golden State's execs on their annual journey to Secaucus for the draft lottery. What made it more frustrating was the perception that no progress was made -- it was the fourth straight year the team won between 34 and 38 games.

In reality, the fast start was probably something of a mirage. The Warriors benefited from unusually poor 3-point shooting by their opponents, not to mention a steady diet of New Yorks, Portlands, Atlantas and Charlottes. Once that figure corrected to a more reasonable number and the quality of the opponents increased, the Warriors were no match (unless the opponent was Dallas, that is -- the Warriors won in the Mavs' building twice).