MOBILE, Ala. -- Clemson cornerback Tye Hill was one of the most impressive players at Monday's North practice at the Senior Bowl. He was fluid, showed great feet and terrific ball awareness. Hill had some drops of potential interceptions, though, and needs to work on his hands. His man-to-man coverage skills could elevate him into the late portions of the first round. 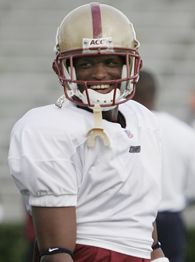 Will Blackmon struggled at corner. He had some playing time at corner during his time at Boston College, but the Eagles moved him to wide receiver in 2005 and used him in the return game. Ultimately, Blackmon will probably have to play wide receiver to make it in the NFL.

Penn State CB Anwar Phillips had some ups and downs Monday. He looked like a second-round pick coming into Mobile, but he didn't help himself today. Phillips was stiff in the hips and wasn't real fluid. He just didn't look as athletically gifted today as he did at Penn State. Phillips needs to be more productive during the week.

Anthony Smith was one of the most impressive players on the North defense. The Syracuse safety showed good hands and was very alert. It appears Smith has grasped the defensive scheme already.