To project which NFL franchises are in the best shape for the next three seasons, we asked our panel of experts -- Louis Riddick, Mike Sando and Field Yates -- to rate each team on a scale of 0-100 in five categories: roster (excluding quarterback), quarterback, draft, front office and coaching.

After averaging the results from the panelists, each of the five categories was weighted to create the overall score -- roster (30 percent), quarterback (20 percent), draft (15 percent), front office (15 percent) and coaching (20 percent). The result is a comprehensive rankings based on how well each team is positioned for the future.

How far did the Panthers rise after a 15-1 season and a Super Bowl appearance? How far did the Cowboys fall as questions about Tony Romo's long-term health continue to loom? And what about the Broncos, who lost the top-two quarterbacks from their Super Bowl team?

Read through the full file 1-32, or jump to your favorite team using the quick links below. 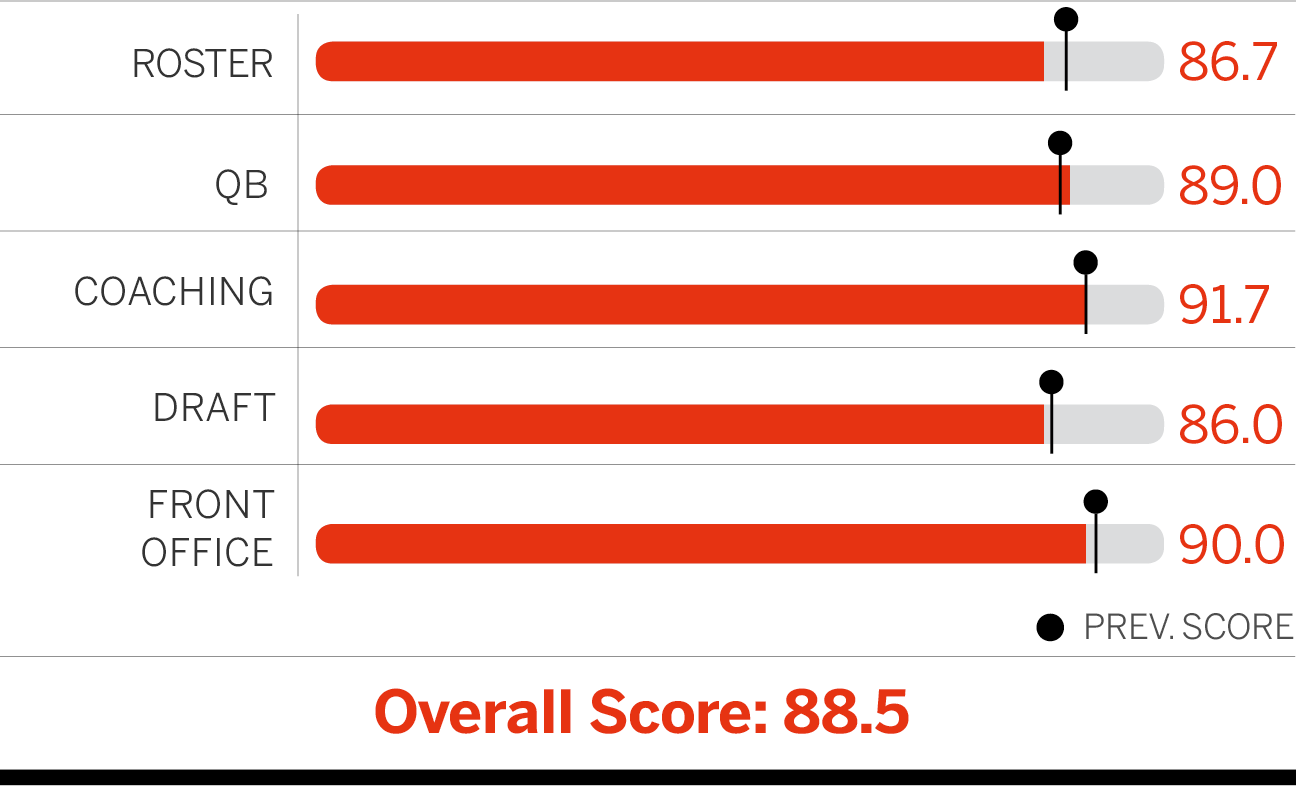 High point: When it comes to coaching, age is truly just a number. Pete Carroll is proof of as much, as he slightly edges Bill Belichick as the oldest coach in the NFL. But his exuberance is unmatched and his roster takes on his personality. Carroll is entering the final year of his contract, but there is every intention for him to get a new deal done. -- Field Yates

Low point: Seattle's lowest rating came in the draft category, which also led the league at 86.0. So it's all good as far as I am concerned with how this organization approaches selecting and developing young talent. The Seahawks have hit on an incredible number of players in the mid-to-late rounds, all while keeping the number of early-round busts to an absolute minimum. This speaks to the philosophical alignment between coach and GM that has to exist in order to have sustainable success. -- Louis Riddick

What could change: The contracts for GM John Schneider and Carroll run through the 2016 season. Re-signing them would seem to be a formality, assuring stability in the front office, along the sideline and behind center, where Russell Wilson remains signed through 2019. Seattle needs its past two draft classes to emerge enough to replenish depth. Early signs are positive on that front. -- Mike Sando