At Pro Football Focus we run position rankings and have done unit group rankings in the past, but here we're going to do something a little more in-depth coming out of the draft -- ranking entire rosters.

We got together PFF's analysts and composed a ranking of each team's roster using our grading, data and football knowledge for added context. Along with each team's ranking we have color-coded the projected starters -- blue for the elite players through to red for the poorest (you can see the color key in the chart at right -- the more blues and greens you have, the better, while a lot of oranges and reds are bad news).

For our starting units we have gone 12 players deep to reflect the base and nickel/third down sets from both sides of the ball.

Here you have it: Our 1-32 ranking of every roster in the NFL. The team at the top is no surprise, although there are plenty in the top 10 and further down the list.

It is no surprise that the defending Super Bowl champions top this list. The defense is stacked with arguably the best corner and safety in the game in Richard Sherman and Earl Thomas, who lead a fearsome secondary. The pair is helped out by a formidable group of pass-rushers up front and a solid linebacker corps. 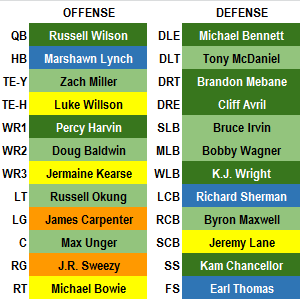 The offense can't quite match the standard set by the D, but Marshawn Lynch heads a loaded backfield and the receiving corps has plenty of depth, if no elite standout. Russell Wilson is a quality starter, and Tarvaris Jackson is a capable backup while Terrelle Pryor provides an interesting X factor to the depth at the position. The only slight weak spot to the team is on the offensive line, but the Seahawks are perfectly set up to mitigate that negative. As if things weren't good enough, the Seahawks also have comfortably the league's best special teams units with Jeremy Lane the pick of the bunch.

By the numbers: With seven members of the defense either blue-chip elite players or high-quality starters, and the entire starting unit ranking average or better, this is the standard-setting defense in the NFL. 16.7 percent of the offensive starters rank below average, but they are on the offensive line and can be covered elsewhere.

The Seahawks are pushed hard by their divisional rivals for the best 53-man roster in football. The 49ers' roster is so good that the team has begun essentially redshirting players in the draft, with Marcus Lattimore a year ago and Brandon Thomas this season sitting out their first year on injured reserve. Their receiving corps was an issue in 2013, but it has been remade in the offseason, and with Michael Crabtree fully recovered from his injury, it should be a strength this year. 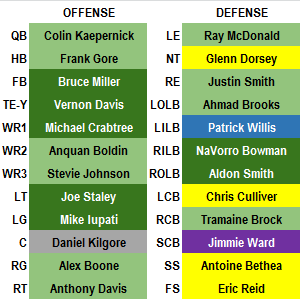 In the same way that they have been taking chances on talent in the draft, the Niners have been able to take shots at talented players with checkered histories in free agency, and traded for Blaine Gabbert in the hope a new surrounding can uncover why he was a first-round draft pick just a few years ago. Former Vikings second-round pick Chris Cook -- signed this offseason -- also fits that description. The only thing separating them and the Seahawks is some question marks in the defensive secondary, where they are counting on young players to take a step forward.

By the numbers: Daniel Kilgore is the only question mark on offense, with every other member of the starting unit ranked good or better. In total, 70.1 percent of their starters on both sides of the ball are ranked good or better. Rookie Jimmie Ward and center Kilgore are question marks, but there is no projected starter who grades out below average.