On July 1, 2018, New York Islanders captain John Tavares will become an unrestricted free agent, and he will command a cap hit far in excess of his current $5.5 million. Whether he remains with the Islanders or tests the free-agent market, how high could his new contract go?

With 32 points (18 goals, 14 assists) in 30 games, Tavares is among the Isles' leading scorers, and if he winds up on top by season's end, it'll be the eighth time in his nine seasons that he has done so. His career total of 569 points ranks eighth among active players in that time, and his 0.92 points per game ranks ninth.

Despite this success, his time with the Islanders is sometimes classified as a disappointment. Drafted first overall in 2009, Tavares was expected to be the type of franchise player who would compete regularly for the Hart Trophy and re-establish the Islanders as Stanley Cup contenders. Nine seasons later, with Tavares at age 27, the Islanders have never won their division, have made the playoffs just three times and have only one playoff series victory since 1992-93, which occurred in 2015-16.

On an individual basis, Tavares has done very well, but he never established himself as the league's best player. His high-water mark was in 2014-15, the only time he was named to the first All-Star team and one of only two times that he finished among the league's top-10 scorers or among the three finalists for the Hart Trophy. Even so, subjectively and objectively, Tavares has always been considered one of the NHL's top 10 players -- but never the best.

Let's break down what exactly a player such as he is worth on the free-agent market, looking at advanced and traditional stats, along with the market he is set to enter.

Tavares by the numbers

In some cases, a franchise player's numbers are lower from having to handle a lot of the team's tough minutes against top opponents in all zones, but that isn't the case with Tavares. He certainly hasn't been sheltered, but Tavares has always been deployed in a very offensive-minded fashion, and he has usually had teammates on another line taking on the top opponents -- most notably when Frans Nielsen was in town.

At 5-on-5, Tavares has started 60.71 percent of his faceoffs in the offensive zone relative to the defensive over his career, which ranks 10th among active forwards who have played at least 100 games. Very few players remain over 60 percent over the long run.

Due in part to that advantageous deployment, Tavares has scored at a consistent rate between 2.1 and 2.5 points per 60 minutes for seven straight seasons. Although a notch below that of the league leaders, that's a solid rate to maintain over the long term. On the power play, Tavares' scoring rate was between 5.8 and 6.2 points per 60 minutes in his prime, which is exceptional, and it remains between 4.4 and 4.6 since then, which is still very good.

Tavares also has excellent career shot-based metrics, which are above average for the ninth straight season. Overall, he has boosted the Islanders' share of shot attempts from 47.7 percent to 51.2, for a relative Corsi percentage of plus-35 that ranks 48th among the 380 active forwards who have played at least 100 games in this time span.

Besides scoring and shot-based metrics, Tavares checks several other statistical boxes -- but to no more than a modest degree:

Crudely, Tavares' market value can be estimated to be between $8.5 million and $9.5 million.

There are a number of ways to arrive at that estimate. For example, we know that Tavares ranks eighth in total scoring and ninth in scoring rate in his career. Even more sophisticated metrics, such as a multiseason weighted average using catch-all statistics such as GVT and WAR, agree on that rough assessment of his league-wide rank. What is that worth? Sidney Crosby, the player with the eighth-highest cap hit for 2017-18 (excluding goalies), uses $8.7 million of Pittsburgh's cap space.

The upper bound of the estimate has to take into account the possibility of a rapidly rising cap hit or if Tavares is actually one of the league's top-five players. If so, then his value will be comparable to that of Crosby's teammate Evgeni Malkin, who has the fifth-highest cap hit in the league, at $9.5 million. 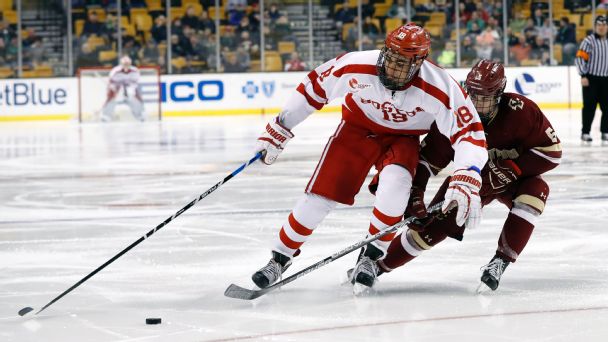 Another method is to base the estimate on Tavares' closest peers. Searching the league for forwards between ages 26 and 28 who are deployed offensively, are top-20 scorers and have good shot-based metrics, the closest matches are Jamie Benn and Steven Stamkos, both of whom signed contract extensions just over a year ago. On June 29, 2016, Stamkos signed an eight-year extension with an annual cap hit of $8.5 million, and on July 15, 2016, Benn signed a similar deal that carried a cap charge of $9.5 million per season.

Hockey analyst Matt Cane developed a more rigorous model that estimates a free agent's market value based on a number of different metrics. He has the cap hit of Tavares' next contract between $9.0 million and $9.3 million.

The subjective opinion appears to be that Tavares will land on the upper end of this estimate and possibly even higher. Based on a recent Twitter poll, the most popular expectation is that his cap hit will be $9.5 million, with far more respondents taking the over than the under on that benchmark.

Even if his peers fall between $8.5 million and $9.5 million, that doesn't mean Tavares is worth the same amount. For all we know, the market rate that the league's GMs have settled on for players such as Tavares isn't correctly calibrated, and he is worth significantly more than that -- or possibly less.

That's why it makes sense to establish a player's value in a way that is independent of the past decisions front offices have made. Detailed in the 2016 book Stat Shot, this involves a process that requires estimating a player's current value at a high level and converting that result from shots and/or goals into dollars and cents of cap space. Then, it is projected into the future, which involves removing the impact of random variation (and other factors) on past results, adjusting for the changes in a player's performance as he ages and accounting for increases in the salary cap.

Although not as mature as similar models in baseball, front offices have had access to such innovations for several seasons, and they all suggest that Tavares might be worth slightly less than the range mentioned above.

Currently, Tavares is projected to be worth approximately 14 extra goals scored or prevented over a full NHL season. Given the current salary cap, roster sizes and individual player minimum, each additional goal of value will be worth roughly $530,000 next season, which places his one-year value at roughly $7.4 million above the league minimum of $650,000, for a total of around $8.0 million.

That evaluation is not completely out of line with estimates of Tavares' market value. If his peer group is extended to include 26-year-olds, such as Artemi Panarin and Taylor Hall, and 29-year-olds, such as Claude Giroux and Patrick Kane, then the average moves to $8.2 million.

For a longer contract, this value doesn't change much. At age 27, Tavares is already at his peak, which he is expected to hold for another couple of seasons. After that, his performance will slowly decline through his 30s, at a rate that essentially matches the expected rise in the salary cap. Regardless of the contract length, the annual cap hit should be around $8.0 million.

There doesn't appear to be any chance that Tavares will sign for $8.0 million or less per season, with the Islanders or with anyone else. If he requires a cap hit of $10.0 million or more in annual average value, most teams would be better off signing two solid $5.0 million players instead.

In fairness, statistical analysis is about probabilities, not certainties. In the salary-cap era, every Stanley Cup champion has taken a few calculated risks. Players like Tavares do not become available every day, and if he is not worth this kind of investment, then who is? One organization or another will take a chance on Tavares, and only time -- not spreadsheets -- will determine his true value.