Believed to be a draft lottery team at the end of the 2017 calendar year -- and likely sellers leading up the NHL trade deadline in February -- the Florida Panthers have held firm, caught fire and climbed to within four points of the final wild-card position in the Eastern Conference.

So what changed? According to the underlying numbers, most factors have remained the same, like the team's shot-based metrics and penalty killing. However, a new top-six forward deployment, more shooting success on the power play, and a return to form by backup netminder James Reimer have all contributed to Florida's turnaround.

If these three conditions remain the same, then the Panthers could make the Stanley Cup playoffs for the fifth time in their 24-season franchise history and advance beyond the first round for the first time since they reached the Stanley Cup Final in 1995-96.

The season started out very slowly for the Panthers, who could have been safely described as the league's third-worst team.

Since then, it's reasonable to include the Panthers among the league's top 10 teams. They are 22-10-2 in that span and rank ninth with 46 points in the standings. They have outscored opponents 109-96, which is 12th in goals scored, 11th in goals allowed and ninth in goal differential, at plus-13.

If the window narrows to just the past 20 games, then it's possible to rank the Panthers as the league's second best. Since Jan. 29, Florida is 15-4-1 and has outscored opponents 72-54 for a goal differential of plus-18. Both figures rank second to Nashville, which is 15-3-3 and plus-28.

In Florida's case, the latter situation appears to apply, since the team's shot-based metrics haven't changed much this season.

Given the unchanging nature of their shot-based metrics, Florida's success can best be explained by finding the right chemistry with which to capitalize on a greater share of their scoring chances.

As was the case with the Philadelphia Flyers earlier this season, Florida's hot streak coincided with the realignment of its top lines to spread out the attack.

Lacking forward depth, Florida's fortunes are closely tied to finding the most effective deployment for the team's five skilled young forwards. Over the course of the season, new coach Bob Boughner experimented with a few different combinations of its top lines before finding the right balance. On Jan. 25, he moved the team's leading scorer Jonathan Huberdeau to the second line with Vincent Trocheck and replaced him with Nick Bjugstad on the top line with Aleksander Barkov and Evgenii Dadonov. In the 21 games since then, all five forwards have at least 17 points.

On defense, the key factor has been the increased usage of 24-year-old Michael Matheson, who leads the team's defensemen with an average of 19:08 minutes per game at even-strength during the hot streak.

Matheson's continued development has helped take the pressure off the team's top pair of Keith Yandle and Aaron Ekblad, whose combined annual cap hit of $13.85 million is the league's highest for a top pairing. With the defensive responsibilities shared more evenly with Matheson, they have had the opportunity to step up into the attack, and have combined for 34 points during the team's hot streak. Yandle's 21 points in the span ranks second among defensemen to Ottawa's Erik Karlsson, 23.

Another reason for the additional scoring is a red-hot power play, which has scored on 29.0 percent of its opportunities during the past 20 games, which ranks second to the Vegas Golden Knights, at 29.6. That's a big improvement from their play prior to Jan. 29, when they ranked No. 27 with a 16.0 power-play percentage.

There's no obvious reason for this improvement, because the lineup hasn't changed. All season, Trocheck, Huberdeau, Barkov, Dadonov and Yandle have been the heavily used primary unit, each of whom have averaged over 3:00 minutes per game with the man advantage, while no one else on the roster has been above 2:00.

As for the shot-based metrics, the Panthers averaged 114.87 shot attempts per 60 minutes on the power play prior to Jan. 29, which ranked third in the league, according to the data compiled at Corsica Hockey. Since then, it actually dropped to 105.98, which ranks 12th.

The additional scoring has been a dramatic shift in shooting percentage on the power play, from 8.49 percent, which exceeded only the Edmonton Oilers, 8.37, to 18.18 percent during the past 20 games, which ranks third. That means that Florida has been 2.14 times as likely to score on any given shot.

As for penalty killing, Florida started off at 79.4 percent, which ranked 22nd and was a far cry from last season, when it ranked second overall at 85.3 percent.

With the exact same units that include Barkov, Trocheck, Derek MacKenzie and Colton Sceviour up front, along with Yandle, Ekblad, Matheson and Mark Pysyk on defense, it has improved to 82.2 percent during the past 20 games, which ranks ninth.

After a couple of rocky seasons in goal, the reacquisition of Roberto Luongo from the Vancouver Canucks on March 4, 2014, has given Florida stability. So, when Luongo was injured after a kick save against the Winnipeg Jets on Dec. 4, 2017, the outlook appeared bleak. 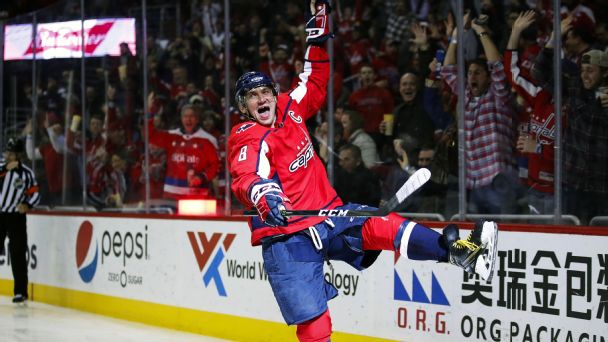 Before conversations with Wild reporter Mike Russo of The Athletic as well as Panthers executive Shawn Thornton, Greg Wyshynski and Emily Kaplan discuss Alex Ovechkin eclipsing 600 career goals and who may one day take his crown, the goalie interference dilemma plaguing the NHL and much more. Listen »

With that loss, Florida was 27th in the standings with a record of 12-15-5 and was relying on backup goalie James Reimer, who had a .896 save percentage, which ranked fourth last among those to have started at least 10 games.

Reimer responded to the challenge and turned things around with a .918 save percentage since that date, which is slightly above his career average of .914. Rookie goalie Harri Sateri, who had never previously played in the NHL, achieved a .911 save percentage in nine games as Reimer's backup.

Luongo made his return on Feb. 17 and is right back to his old self, with a .924 save percentage. Of the three contributing factors to Florida's success, this is the one most likely to continue.

The right player deployment changes can help get the most out of a team's lineup, especially with the youth, speed and skill of the top half of Florida's roster. By putting Matheson in a more prominent role and spreading out the attack by placing Bjugstad on the top line and Huberdeau with Trocheck, Boughner has unleashed the team's full potential.

Almost by definition, every team in the playoffs has also caught fire at one point or another, and is playing at or near their full potential. That's when a team's strength throughout its entire lineup tends to be the deciding factor -- unfortunately, that doesn't work in Florida's favor.

Based on the team's mediocre shot-based metrics and the more modest contributions from the bottom half of the lineup, Florida could be exposed against deeper teams, like the Tampa Bay Lightning or Toronto Maple Leafs. Unless the Panthers can continue to score on a greater share of their chances than their opponents, then they might make a quick first-round exit, assuming they make the playoffs at all.