For over 30 years there has been a statistic with an uncanny reliability for predicting the winner of the Hart Trophy, and it is pointing squarely at Connor McDavid of the Edmonton Oilers winning the award for 2017-18.

Before calling the engraver, it's important to consider the unwritten rules that apply to Hart Trophy voting. While not explicitly listed as qualifying criteria, most voters in the Professional Hockey Writers Association feel that a candidate's team must make the playoffs, the player can't have missed a significant number of games, and that there can't be another superstar on the same team.

The first criteria disqualifies McDavid, but the others disqualify most of the other leading contenders, too. So where does that leave us?

The presence statistic: Predictor of the Hart?

Let's start by identifying the leading contenders, and introduce the statistic in question. It's called presence, and it was first published over 30 years ago by hockey analytics pioneers Jeff Z. Klein and Karl-Eric Reif in their 1986 Hockey Compendium as the first attempt to measure the importance of individual players to their teams.

The first version of the statistic was specific to goals, and was calculated by dividing a player's goals (prorated over an entire season) by the number of goals scored by his teammates. So the more a player scores, and the fewer goals scored by the rest of his team, the higher his Goal presence will be. At 0.228, McDavid is in second place this season, narrowly trailing Alex Ovechkin by a rounding factor.

McDavid's goal presence is actually higher than Wayne Gretzky's 0.221 in his record-setting 92-goal season, because the rest of the 1981-82 Oilers scored so many goals. A better example of a valuable goal scorer is Pavel Bure, who led the NHL in goals for the second consecutive season with 59 goals in 82 games in 2000-01. Given that his Florida Panthers teammates combined for just 141 additional goals, his goal presence was an untouchable 0.418 that season.

Once the formula was expanded beyond goals to include all of a player's points, it became a reliable predictor of Hart Trophy winners -- assuming the player's team made the playoffs. For example, Bure led the NHL with an amazing presence of 0.652 in 2000-01, but didn't win the Hart Trophy because the Panthers were so far outside the playoff picture.

This wasn't a one-time error, because the same situation occurred the very next season, when Jarome Iginla became the first player other than Gretzky, Mario Lemieux or Jaromir Jagr to win the NHL scoring race since the 1970s. He had a jaw-dropping presence of 0.644 that season, but because the Calgary Flames missed the playoffs, Iginla lost the Hart Trophy race to one-hit wonder Jose Theodore of the Montreal Canadiens.

If Iginla didn't even appear on one voter's five-player ballot, and if Bure finished ninth when he scored 59 goals and 92 points on a team where Viktor Kozlov finished second with 14 goals and 37 points, then how does McDavid even stand a chance?

If the Oilers qualified for the playoffs, then the PHWA would have its easiest decision in years. McDavid has a clear lead in the scoring race and in presence, and handily won the award in 2016-17.

If voters insist on having the candidate's team in the playoffs, then the leading alternative could be Nathan MacKinnon -- although his team is at risk of being on the wrong end of the hotly contested wild-card race in the Western Conference.

In the greatest improvement of the salary cap era, the Colorado Avalanche jumped from 48 points in the standings in 2016-17 to 90 in 2017-18, plus whatever they earn in their remaining five games. It's easy to assign the lion's share of the credit to MacKinnon if Colorado returns to the postseason for just the second time in eight years. He leads the team with 92 points, which ranks fifth overall, and is the most by an Avalanche player since Joe Sakic scored 100 in 2006-07.

Boston's Brad Marchand ranks third, but he missed 14 games due to injury and suspension, and missing that much time is the second unwritten disqualifying factor in the minds of Hart Trophy voters. Jaromir Jagr led the NHL in scoring with 96 points for the Penguins in 1999-2000, and had a scoring presence of 0.628, but missing 19 games was enough for most voters to choose Chris Pronger of the St. Louis Blues instead. If an injured Jagr had simply suited up, sat on the bench, and contributed nothing for those 19 games, he probably would have won.

Further down the list is the interesting case of Evgeni Malkin, who is tied for third in scoring, and ranks eighth in scoring presence. However, he could be disqualified by the third unwritten rule, because he has notably strong teammates like Sidney Crosby and Phil Kessel. This has been a trend with Malkin.

What about Nikita Kucherov, who ranks second to McDavid with 97 points? Since the Lightning lead the NHL with 275 goals, he ranks No. 11 with a scoring presence of 0.420. He is having a great season, but isn't as critical a player to a powerhouse team like Tampa Bay as MacKinnon has been to an otherwise mediocre, non-playoff team like Colorado.

If McDavid, MacKinnon, Marchand, Malkin and Kucherov are all disqualified for various reasons, that just leaves players like Taylor Hall, Anze Kopitar and Claude Giroux as dark horse candidates -- depending on which teams make the playoffs. But, that's starting to dig pretty deep.

To gain a little bit more insight, there's a more modern variation of the presence statistic known as individual points percentage (IPP) that can help fine-tune the process. However, it appears to make an even stronger case for McDavid, and essentially rules out every reasonable alternative except MacKinnon.

In July 2008, I tweaked the presence statistic by removing special-teams play, and considering only the goals that occur while the player was actually on the ice. Initially introduced as even-strength points percentage statistic (ESP), the formula is to divide a player's points by the number of goals the team scored while he was on the ice. In October 2012, this statistic caught the eye of Scott Reynolds, who popularized it under its new name, which is how its been known since.

Among those with more than 20 points this season, McDavid ranks second by recording the goal or an assist on 88.5 percent of all on-ice scoring for the Oilers. The only player ahead of him is Alex Galchenyuk, who can hardly make a bid for the Hart Trophy from being in on 23 of the measly 25 goals Montreal scored when he was on the ice.

MacKinnon ranks highest among those on possible playoff teams at 85.9 percent, which is fifth overall.

Of the other previously explored Hart Trophy contenders, only Kucherov and Marchand made the top 10.

Scoring isn't everything, but it is what members of the PHWA have historically relied upon when casting their votes. That's why the presence statistic has been so useful in shining light on which players might gain their favor. 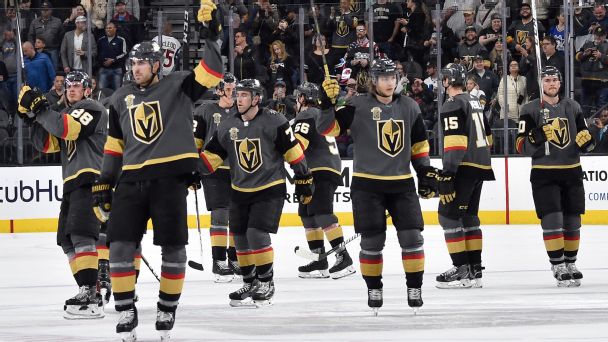 This season, the numbers are clearly pointing to McDavid. However, the presence statistic has proven misleading when the top player violated one of the three unwritten rules by either missing the playoffs, missing too many games, or having one or more notable teammates.

Normally, that would direct voters to the next leading contender, but all the top candidates are at risk of being disqualified by at least one of those rules. If Colorado makes the playoffs, then we can safely expect MacKinnon to win. Otherwise, if the dominoes fall for everybody, then maybe the voters will go off script and select only the third different defenseman or the fourth different goalie since the 1967-68 expansion. At that point, all bets are off.

If voters are going to go off script, then this could be the season to finally set aside those unwritten rules -- and vote for McDavid.

Disclosure: Rob Vollman is a former member of the PHWA, during which time he voted on the Hart Trophy.