No matter who wins the Stanley Cup, at some point in the team's celebration there's always at least one grizzled veteran who hoists the sport's ultimate prize for the first time. In that moment, even fans of other teams can share in the celebration of the triumph of that player's sacrifice and perseverance.

Who will it be this year? Based on each player's career performance to date, we have identified the 10 most accomplished players who have never won the Stanley Cup and used MoneyPuck's projections to estimate their chances of doing so this season.

Closest call: The New York Rangers reached the Stanley Cup Final in 2014 and lost to the Los Angeles Kings, 4-1.

Before joining the Rangers before the 2012-13 season, Nash hadn't even won a playoff game, let alone the Stanley Cup. He has had much more success since then, with a series record of 7-5 in five seasons with the Rangers, and led the NHL in postseason shots in 2013-14 and 2014-15.

Nash, who ranks fourth among active players with 437 goals, was traded to the Bruins at the trade deadline and is playing on the team's second line with David Krejci and Jake DeBrusk.

After Marleau's 20 seasons in the NHL, winning the Stanley Cup is one of the few achievements he has yet to reach. He leads active players with 1,575 games played, ranks second to Marian Hossa in the playoffs with 180, holds virtually every franchise record for the Sharks, has played in three All-Star games, is one of the game's fastest skaters and won gold medals for Canada at the Winter Olympics in 2010 and 2014.

High-scoring players like Auston Matthews might get a lot of the attention, but Toronto's fate also depends on Marleau and his linemate Tomas Plekanec, who is also seeking his first Stanley Cup, after 998 regular-season games. Together with Mitch Marner, he was deployed against Boston's top line of Brad Marchand, Patrice Bergeron and David Pastrnak in home games, where Toronto gets the last change.

There are several Sharks eager for the team's first Stanley Cup victory, including captain Joe Pavelski as well as veteran defensemen Brent Burns and Paul Martin. Of them all, Thornton has been fighting the longest.

In his 20 NHL seasons, Thornton ranks second among active players with 1,733 regular-season games and fourth with 160 games in the playoffs. His 1,427 points in the regular season leads the NHL by 293 over Marian Hossa of the Chicago Blackhawks, 1,134. Thornton is the only active player to score more than 120 points in a season, having scored 125 in 2005-06, when he won the Hart Trophy as the league's most valuable player. The following season, he joined Wayne Gretzky and Mario Lemieux as the third player to have 90 assists in back-to-back seasons.

Thornton has been out of the lineup since Jan. 23 because of surgery on the MCL in his right knee, and his status for the Sharks' Round 2 series is unknown.

Closest call: The Predators reached the Stanley Cup Final in 2017, losing 4-2 to the Penguins.

On Jan. 31, Fisher announced he was coming out of retirement, presumably for the opportunity to win the Stanley Cup in his 18th NHL season. Among active players, he ranks No. 10 with 1,104 games played in the regular season and No. 11 with 137 in the playoffs.

Fisher's greatest opportunity was with the Ottawa Senators in 2006-07. They lost only three games en route to the Stanley Cup Final, where they were defeated by the Anaheim Ducks 4-1. At 37 and working in a depth role with Miikka Salomaki and Ryan Hartman, it's unlikely Fisher will get another opportunity after this one.

Closest call: The Philadelphia Flyers reached the Stanley Cup Final in 2010, losing 4-2 to the Blackhawks.

Fisher's return might have come at the expense of Hartnell, who was a healthy scratch six times in the final 20 games of the season, averaged just 9:56 per game and has yet to make an appearance in the postseason.

Hartnell, who turned 36 on Wednesday, ranks sixth among active players with 1,249 career games; 22nd with 707 points; and second with 1,809 penalty minutes behind only Zdeno Chara of the Bruins, who has 1,839.

Several accomplished Washington players are hungry for a Stanley Cup, like Nicklas Backstrom and Braden Holtby, but nobody is more anxious than Ovechkin. He is already considered one of the most accomplished goal scorers of all time, but his place in history won't be cemented until he wins the game's ultimate prize.

Unlike others on this list, there might still be plenty of time for Ovechkin to win the Stanley Cup. He's only 32, and he just won the Rocket Richard Trophy for leading the NHL in goals (49) for the fifth time in six seasons.

Closest call: The Buffalo Sabres reached the conference finals in 2006, losing 4-3 to the Carolina Hurricanes. 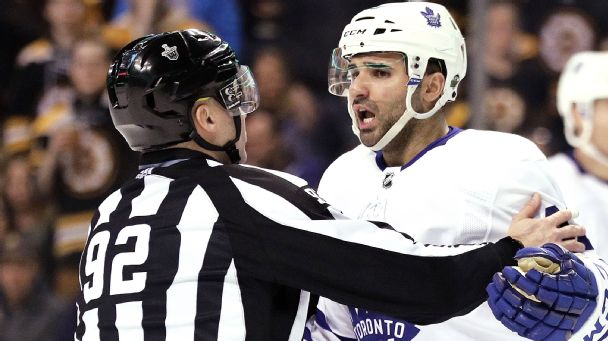 Greg Wyshynski and Emily Kaplan debate which playoff teams are in the biggest amount of trouble, what the solution is to the postseason player safety issue and Snoop Dogg's hockey tutorials. Plus, CSN Washington's Alan May and "Catfish Guy" Jacob Waddell. Listen »

Vanek has played for eight teams in the past five seasons, only one of which came within striking distance of the Stanley Cup; the Montreal Canadiens were eliminated 4-2 in the Eastern Conference finals by the Rangers in 2013-14.

Much like the Vegas Golden Knights today, everything fell into place for the Sabres in 2006-07, with so many of its players setting their career highs, a few of which were never reached again. Daniel Briere led the team with 95 points, which was 23 more than he scored in any other season; Chris Drury set his career highs of 37 goals and 69 points; Jasom Pominville set his high of 34 goals; and Jochen Hecht set a career high of 56 points. As for Vanek, he set his career highs of 43 goals and 84 points, and led the NHL with plus-47 -- he has failed to reach even plus-10 since then. If ever Vanek was going to win the Stanley Cup, it was then -- unless the Blue Jackets can go on a run here.

Closest call: The Wild reached the second round in 2014, losing 4-2 to the Blackhawks.

In 13 seasons with the Wild, Koivu has made the playoffs eight times and advanced to the second round twice, but he has never competed in the conference finals, let alone for the Stanley Cup.

In addition to his defensive play, Koivu is known for his scoring. The team captain is the franchise leader with 925 games, 466 assists and 659 points, and his 193 goals ranks second to Marian Gaborik, 219.

For such a great hockey player, Pavelski's trophy cabinet is surprisingly bare. He has never won the Stanley Cup, and with the exception of being named to the All-Star second team in 2013-14, San Jose's captain has never won or been among the three finalists for any individual award.

Despite this lack of recognition, Pavelski has accumulated some pretty impressive career numbers in his 11 seasons with the Sharks. He ranks No. 19 among active players with 317 career goals, No. 23 with 697 points and No. 7 with a shot attempt differential of plus-1,736 since 2008-09.

Closest call: The Rangers reached the Stanley Cup Final in 2014, losing 4-1 to the Los Angeles Kings.

This could easily be Moore's last chance. He played just three games in March and has been in the lineup for just one playoff game so far, when he was assigned just 8:14 on the fourth line with Andreas Johansson and Kasperi Kapanen.