With the hiring of Jim Montgomery by the Dallas Stars on May 4 and David Quinn by the New York Rangers on May 22, it's clear NHL interest in NCAA coaches is on the rise. Add in Dave Hakstol, who was hired by the Philadelphia Flyers on May 18, 2015, and the 2018-19 season will kick off with three head coaches who came directly from the U.S. college ranks -- the greatest total ever. What can we expect from Montgomery and Quinn, and who might ride this wave next?

To answer that question, I applied trusted NHL coaching metrics to all NCAA Division I coaches in history, leaned on my experience with other leagues and determined that Quinn's impact could be similar to what Hakstol's has been, and that Montgomery has an additional upside that could make him one of the league's best.

Using this data, we can also uncover a handful of coaches whose metrics rival Quinn's and Montgomery's and could be of interest to future teams with coaching vacancies. Let's start with a rundown of the coaches who should be in the mix for the next wave of openings, and then go more in-depth on what to expect from the Stars and Rangers this season and beyond.

Despite their established success in the U.S. college ranks, it's difficult to set NHL expectations for Montgomery and Quinn, because NHL coaches with experience in the NCAA have been so scarce. In the past three seasons, Hakstol and Jeff Blashill of the Detroit Red Wings have been the only head coaches with NCAA experience, and Davis Payne, Newell Brown, Greg Cronin, Rick Wilson and Tim Army were the only assistants. In almost every case, their experience in U.S. college was limited, occurred long ago and/or they were required to prove themselves in the AHL first. 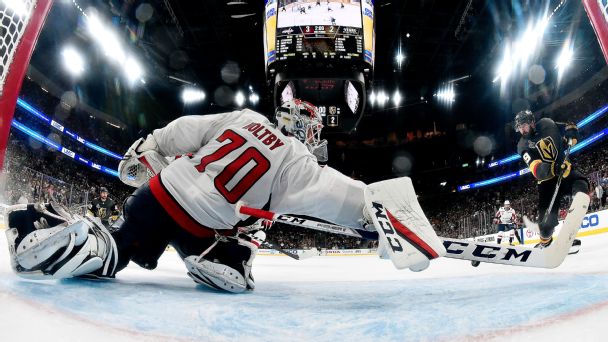 Welcome to the Stanley Cup Final! Greg and Emily are together at last to discuss the series, and Gary Bettman's State of the NHL address. Plus, ESPN's Arash Markazi stops by to cover atmosphere in Vegas, and the team gets into all of your favorite segments of the week! Listen »

However, there is a coaching metric that was developed for the NHL back in 2009 that has been applied to other leagues such as the AHL and the Canadian Major Juniors over the past three seasons, and it might prove useful for U.S. college hockey, as well.

The metric works by comparing how many points a coach's teams achieved in the standings relative to expectations. Given the limited data, those expectations are set based on the previous season and regressed back toward the league average by 35 percent. That means a good coach keeps a good team good, makes an average team better and boosts a bad team by more than it would have improved on its own. The system doesn't work perfectly over individual seasons but can generate meaningful results over a longer stretch of time.

With apologies to other top coaches such as Quinnipiac's Rand Pecknold and Providence's Nate Leaman, we have limited this list to just the top coach from each of the WCHA, Hockey East, Big Ten and ECAC Hockey conferences who would make the best fit in the NHL.

Having just signed a 10-year contract with the Mavericks a little more than one year ago, Hastings isn't likely going anywhere. However, his average boost of 16.4 points per 82 games is the highest of all recently active NCAA coaches and can't be ignored.

Even prior to his six-season stint with the Mavericks, which included winning the Spencer Penrose Award as the NCAA Division I coach of the year in 2014-15, three seasons as the WCHA regular-season champion and two tournament championships, Hastings was one of the most successful USHL coaches in history. In 14 seasons with the Omaha (and River City) Lancers, Hastings reached the finals six times, won the championship three times and compiled an incredible record of 533-199-57. He was named the coach of the year in 2001-02 and in 1996-97.

Last season, the River Hawks had a record of 17-19-0, which works out to a points percentage of .472, their first time below .615 in seven seasons under Bazin.

Even with this disappointing season, the tremendous success of his first six seasons means Bazin still ranks second in this group with an average of 14.8 extra points per 82 games. He has won the Bob Kullen Award as the best coach in Hockey East three times and the Penrose in 2012-13 after guiding the River Hawks to their first tournament championship -- an achievement he helped the team repeat in 2016-17.

Based on the three current head coaches, NHL front offices appear to have a narrow age preference for hiring U.S. college coaches, between 48 and 51. However, that window leaves out last year's Penrose winner, Jeff Jackson, 62, who also won the award in 2006-07.

In 32 seasons as an assistant or head coach in a variety of leagues, Jackson has compiled an impressive list of achievements. In six seasons as head coach of the Lake Superior State Lakers, he reached the finals three consecutive seasons, winning the championships in 1991-92 and 1993-94. Then, he headed the USA Hockey National Team Development Program for three seasons, winning a silver medal at the 1997 world junior championships. He coached the OHL's Guelph Storm from 2000-01 to 2002-03 and was an assistant coach with the New York Islanders in 2003-04 before taking over the Fighting Irish in 2005-06, the year after the Irish posted a disappointing 5-27-6 record. Since then, they have won three regular-season conference championships and four conference tournament championships, including 2017-18; they also lost in the national championship game this past season and in 2008.

Statistically, Jackson has boosted the Lakers and the Fighting Irish by a combined total of 110.0 points in 770 games as head coach, which works out to 11.7 per 82-game season -- about the same as Montgomery, 11.6.

If NHL organizations are open to the idea of hiring a more experienced NCAA coach like Jackson, then another option includes Don Lucia of the Minnesota Golden Gophers, who has added an average of 8.9 points per 82 games during his 31-season head-coaching career.

Schafer kicked off his tenure as head coach at Cornell University with back-to-back 21-win seasons after the school had a combined total of 25 wins over the previous three seasons.

The reluctance of teams to hire coaches from NCAA means the organizations who have interest can have their pick of those with the strongest credentials. In that regard, the Stars and Rangers have hit the mark with Montgomery and Quinn, who are among the most highly accomplished U.S. college coaches of recent times.

After five seasons as the head coach of the Pioneers at the University of Denver, Montgomery was hired by the Stars this spring. In that time, the highlight was the 2016-17 season, when they finished first in their conference (NCHC) with an 18-3-3 record and won the national championship. Montgomery won the Penrose, and defenseman Will Butcher won the Hobey Baker award as college hockey's top player.

Montgomery also won the USHL championship twice in three seasons as the head coach of the Dubuque Fighting Saints, during which time he compiled an outstanding record of 118-45-21.

As for Quinn, he spent the past five seasons at the University of Boston, where he succeeded one of the greatest coaches of all time, Jack Parker. His highlight was 2014-15, when Jack Eichel won the Hobey Baker and the Terriers made the national championship game.

Using the statistical method described above, Montgomery has boosted his teams by 29.2 points in the standings in 207 games, which works out to 11.6 points per 82 games. That's the fourth-best career average among the 81 recently active NCAA head coaches.

Factoring in his stint with the AHL, in which he added 6.6 points in 236 games, Quinn is also expected to add about 3.9 points per season and potentially join Hakstol in the top 10.

While Hakstol is a useful yardstick against which to measure Quinn's performance this season, Montgomery might be capable of even greater success. His average of 11.6 extra points in the NCAA is greater than Parker (10.0), as well as other legendary coaches such as Red Berenson (8.9) and Dean Blais (7.6) and trails only the incomparable Ron Mason (14.2).

At the NHL level, it's possible Montgomery could add 7.3 points to the standings. If so, he would compete with Minnesota's Bruce Boudreau as the league's third-best (7.1), trailing Gerard Gallant of the Golden Knights (13.8) and Jon Cooper of the Lightning (8.6).