Moments after the final whistle blew, PR Sreejesh took a quiet moment for himself. Perched on the top left corner of the crossbar, the Indian keeper sucked at his fingers in disbelief and surveyed the blue turf below. His team-mates were hugging and crying and a few spent Germans were splayed on the ground in grief. The 35-year-old had dreamt of this moment - an Olympic medal - in his countless travels next to stinking toilets in packed trains clutching his oversized kit bag, curling up at bus stations overnight and taking blows on his body in his cheap cane pads as a junior.

It took him three Olympic Games to get here. He ended it not only with a medal but arguably as the Indian team's key player in the tournament.

"You can tell how much Sreejesh has put into the job from the hair on his head," laughs former national coach, Michael Nobbs. "He's just one of those guys who lives and breathes the game and throws his body on the line." At the Tokyo Olympics, he saved 23 of 33 field goals and 17 of 27 PCs faced by India.

By nature of their profile, goalkeepers are often the most flamboyant and eccentric characters on any field. Their job description demands they train their muscle memory and reflexes to go against natural human instinct and hurl themselves in the path of an incoming projectile, rather than duck to safety. It must take unflinching fearlessness and spades of crazy.

Nobbs once had a fellow Australian strength and conditioning coach sample Indian spice at the national camp in Bengaluru.

"The guy hadn't stepped out of Australia ever so I was excited that he tried the red and green chilies out. I called Sreejesh over and asked 'buddy which ones you think he could try?' Sreejesh came over, took a fist of red chilies and munched on them like carrots. My friend from Australia was mighty impressed and took a bite off one himself and almost passed out. That's Sreejesh. Crazy, brilliant and full of fun."

Hockey doesn't even crack the top five most popular sports in Kerala, yet Sreejesh picked it because it was the only one at the GV Raja Sports School in Trivandrum where everyone was a beginner. The other sports - basketball and volleyball - already had a handful of decent players. The intent was clear - he wanted to stand out, not catch up. He chose goalkeeping because it seemed like the least athletic of the roles on a hockey field and he hated running anyway. Then junior national coach Harendra Singh had spotted Sreejesh at an U-16 camp in Trivandrum. The 15-year-old arrived for his first national trials at the JN Stadium in July 2003 by the Trivandrum-Delhi Express train with a check lungi in his satchel.

How Sreejesh kicks it up a notch 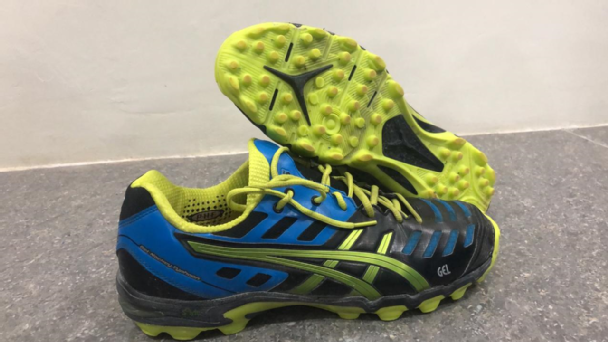 In a job ruled by split-second decisions, hockey goalkeepers have to be on the balls of their feet. Sreejesh saves two pairs of his UK 10 Typhoon 3 shoes for the task. The soles have big plastic studs allowing for superior grip and quick direction changes.

"The vamp, or the front of our shoes has to be a bit hard for the extra support because often during a save, our toe can end up jutting outside our leg guard," he says. There's also self-made customization that he throws in for perfection. "The straps of the pads I wear have to pass from under the soles so I heat a cutter and run it over the section of studs where the strap would have its path, so that it sits snug."

Usually, Sreejesh goes through a pair in three months or at the most, six. "Our shoes weather a lot of blows and sometimes a wrong movement can cause them to come apart in half. For training, I use my spare pairs. The brand seems to have discontinued production of the Typhoon 3 model I prefer, so I kept aside the two pairs I have for Tokyo."

"The signs were good," says Harendra. "Generally 'keepers tend to use their right leg more than their left but Sreejesh would use both his legs as a junior and the other thing was unlike many others who kept their hands on the side, he was always bent and his hands were positioned like a tennis player receiving serve.

"Since he only spoke Malayalam, he was a bit hesitant in communication. The first thing I did was pair him with the boys from the north as roommates and asked him to not be afraid of yelling, cursing, whatever was needed to control play."

When Sreejesh broke into the senior side, it was bursting at the seams with goalkeeper options - Adrian D'souza, Baljit Singh, Devesh Chauhan and Bharat Chhetri. It meant he would have to wait his turn, if at all it came. Starved of experience under the bar, a reserve keeper can often fade away. Not Sreejesh.

"As a goalkeeper you cannot just accept whatever is thrown at you on the pitch, you learn to resist and fight back. Sreejesh did the same with his fate in the team," adds Harendra.

He labored on his communication skills, fought parochial divides, and slowly grew into the loudest, most vocal Indian member on the pitch.

"Earlier he would slide quickly on the ground when attempting a save. He soon realised that it's putting him at a disadvantage for a second shot at the goal. Today he is pretty much the ideal goalkeeper in modern hockey. His agility, anticipation, interception and ability to read opponents' minds is outstanding."

And his leadership, though unofficial, is unquestioned. "No matter who the captain is, on the hockey pitch it's the goalkeeper who is leading the side because we have the best view of the field," he once told ESPN. "It's important that I stay positive in my messages during matches because the rest of the team is following the tone and tension in my voice. Nothing in my voice should let them down. They should know that no matter what happens, I'm here and the ball will not get past me."

Sreejesh's interests are disparate from most others in the team. Reading is his most loved hobby and he devoured books in piles during the side's pandemic-hit stay at the national camp. He is among the last from his generation to continue to remain a main-stay in the side.

"Sreejesh, Sardar (Singh), (SV) Sunil and I would make pots of coffee and sit on the balcony of our hostel, chatting for hours. Sreejesh would often say, 'Brother, we have to do something in our time, we have to make a difference'," former India defender VR Raghunath recalls. He and Sardar have retired, while Sunil was left out of the Tokyo squad. "This medal is a reward for how Sreejesh has carried the side on his shoulders over the years. It's a medal for a generation that hoped but never won."

Indian hockey went through some of its lowest phases in the past decade and a half - from the side being ranked 13 in 2008 and failing to qualify for the Beijing Games to being top three in the world today with an Olympic bronze-medal. Sreejesh battled an ACL tear in 2017 which kept him away from competitive play for close to a year, and he returned to a side where he was no longer the captain.

What stayed unchanged is his ability to marshal the side. "You don't get a great goalkeeper at the age of 21 in the sport. You need those years under the bar to know how to command the defenders so you don't have ridiculous shots put at you," says Nobbs. "Sreejesh is perfectly seasoned for the role." The dying six seconds of play on Thursday showed why.

India conceded a penalty corner and the ball, struck by Lukas Windfeder sped towards Sreejesh, waist high to his right. India were up 5-4 then, and in the nerve-jangling, heart-thumping nanoseconds that followed, he hurled his body as a shield, blocking a rebound. It was at that moment that he, the rest of the team and a billion people back in the country collectively exhaled, certain that history had been made.

Sreejesh let out a guttural scream. The rest must be a blur. It's been a lifetime's wait.

"We are the guys wearing helmets and waiting for the blows", he once told ESPN. "Most people may not even know what we look like because they hardly get to see our faces... but almost always we are remembered for our misses rather than saves." On Thursday, in the biggest game of his life, with the biggest save of his life, he changed that descriptor forever.